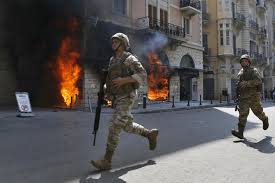 Clashes continued in the northern city of Tripoli this week, after protesters targeted banks and other buildings.

According to a field source in Tripoli, the Lebanese Army fired tear gas canisters to disperse the protesters, while groups called for the popular movement to close the bridge that connects the two parts of the city in to protest against the killing of an activist in the city of Tripoli last night.

Tripoli had the funeral this afternoon to commemorate Fawaz Fouad Al-Samman, who died from his wounds yesterday during the confrontations between the army and the protesters in Abdel-Hamid Karami Square