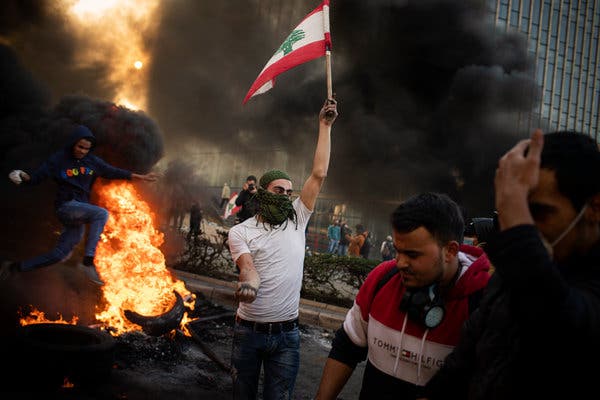 The Hunger Riots in Lebanon served with a Molotov Cocktail

Hundreds of Lebanese demonstrators took to the streets with a vengeance in what they are calling ‘The Hunger Riots’.  They paused their protests in March because of the restrictions imposed due to the COVID-19 crisis, but once the spread of the virus slowed to less than 10 new reported cases per day they have resumed.

The angry protesters torched and vandalized banks across the country, as they vented their frustration over the once stable Lebanese lira losing 50% of its value within six months, which caused rapid inflation. The banks responded by shutting and refusing to allow customers to withdraw their funds. The protestors are reacting to a combination of hunger and their belief that their money is being stolen.

“The problem is that you’re having a combined crisis, between the essential economic crisis and the Covid-19 crisis,” said Social Affairs Minister Ramzi Musharrafieh.  Before the Covid-19 outbreak, the World Bank projected that 45% of people in Lebanon would be below the poverty line in 2020. Now, the government believes that up to 75% of people need aid.

Tripoli saw the largest and most violent protests. On April 28 Fouaz al-Semaan died from being shot by the Lebanese Army, which expressed regret at the killing but without accepting responsibility.  After the emotion-charged burial, protestors began setting banks on fire and clashes ran through the night as soldiers gave chase, which resulted in dozens of arrests.

Mira Minkara, of Tripoli, said, “It’s not normal pain. It’s the pain of when you’re hungry, you’re angry and you’re sad that you can’t pay rent anymore and you can’t eat.”

The central bank in Sidon was attacked with at least six Molotov cocktails, while banks in Beirut and Nabatieh were also torched.

Hassan Diab became Prime Minister on January 21, 2020. Diab is a career academic who had served as Lebanese Minister of Education from 2011 to 2014. At the time of his appointment, he had a low public profile and was seen as an independent.

“It is normal for the people to take to the streets and explore their anger anew, as they did in the October 17 uprising, especially after they witnessed the presence of political attempts to prevent the government from opening the corruption files,” Diab said during a cabinet session on April 28.  “As I said before, tampering with security stability is prohibited and there should be accountability against these violators and the state won’t stand idly by,” he added.

Lebanon’s Energy Minister, Raymond Ghajar, delivered bad news on April 27: the exploration of “block 4” off-shore found no commercially-viable amount of gas. The 2019 budget was partially based on the supposed, but unproven energy resources. Lebanese government officials have imagined the natural gas reserves as the savior of the struggling economy.

In 2017, an international energy consortium including French, Italian, and Russian firms were awarded contracts to drill in “block 4”, as well as southern “block 9”. If and when a discovery is made, it would take seven to nine years to extract the hydrocarbons from the seafloor, and revenues would take longer to reach the treasury.

Lebanon has the third-highest debt burden in the world compared to the size of its economy, with $90 billion of debt. It defaulted on a $1.2 billion Eurobond in March and is trying to restructure its debt. Since the currency depreciated by more than 50 percent,  shops have closed and thousands have lost their jobs. Human Rights Watch warned that the Lebanese are facing hunger. The government has been criticized for repeatedly delaying aid distribution to the needy due to crass political maneuvers.

Lebanon’s ruling establishment has always depended on money coming in from abroad to patch up their failing finances, instead of structural reforms and cracking down on corruption which has become part of the government’s culture.  Their draft rescue plan calls for an infusion of $10 to $15 billion from oil-rich Gulf monarchies, who are always the honored guests at donor conferences.

In 2019 the banking sector began limiting withdrawals from customer accounts, and later completely shut the banks, depriving customers of access to their money. Most Lebanese believe the situation hurts small investors, while the economic elite and government officials have unfair access to funds.

Prime Minister Diab announced that $5.7 billion was transferred out of Lebanon’s banks in January and February 2020. Diab has been critical of the Central Bank Governor Riad Salameh of the Banque du Liban and has called for an audit.

On April 29 Salameh gave a televised statement, in which he blamed ‘someone’ for a smear campaign against the central bank based on misinformation. He claimed the bank’s liquidity exceeds $20 billion in the budget, and there are no secret spending decisions at the bank.

It began on October 17, 2019, when the communications ministry announced a new tax on the phone app “Whatsapp”. Protesters then spray-painted graffiti to a cement wall.  “Down with the rule of the mafia” was painted next to “revolution” and the word “thieves” was a reoccurring accusation hurled at government officials by hundreds of thousands protesting in the streets of Lebanon from North to South.

They began asking for an interim government of experts, not political parties, to run the country. The government had failed for years to provide free education for children, which has led to generations of the uneducated, unskilled and unemployed.  The government has not provided water, electricity, or garbage services consistently, with sporadic cut-offs, and piled refuse in a country that is supposed to be a tourist attraction.

Former Prime Minister Fouad Siniora is accused of ‘misplacing’ $11 billion during his term from 2005-2006, which he tried to explain as ‘expenses’.

Lebanon is a sectarian run government, with some democratic aspects. The President must be Maronite Catholic, the Prime Minister must be Sunni Muslim and the Speaker of the Parliament must be a Shia Muslim.