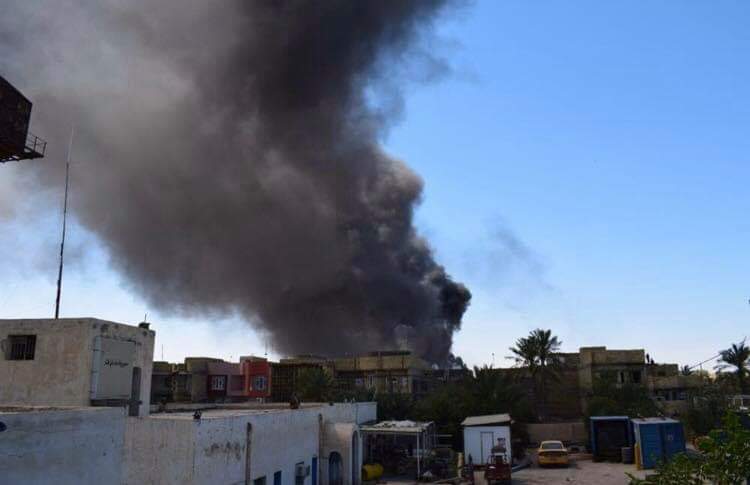 A series of airstrikes by the Saudi-led military coalition have hit trucks carrying imported food and medicine in Yemen’s central province of al-Bayda, as the Riyadh regime presses ahead with its devastating onslaught against the impoverished Arab country.

Three drivers were injured and a number of people, including foreign nationals, went missing as the shipments owned by local traders went up in flames, Arabic-language al-Masirah television network reported.

The report added that the bombing happened on Saturday morning, when the trucks were awaiting at a customs zone recently established in the Afar area of the province.

The chairman of the Supreme Revolutionary Committee of Yemen, Mohammed Ali al-Houthi, later denounced the Saudi-led air raid as a premeditated war crime.

The Saudi-US aircraft are prolonging the crisis through several escalatory means, including a spate of dawn air raids on Afar customs center in al-Bayda province, which left several people dead and injured and set a number of trucks loaded with food and basic commodities ablaze,” Houthi wrote in a post published on his Twitter page on Saturday.

He added that acts of aggression and massacre of civilians are the most heinous crimes that enemies have perpetrated during the past few years against Yemen.

Houthi then advised Saudi Arabia as well as its allies, the UK, the US, and the United Arab Emirates (UAE), to concentrate on the fight against COVID-19 rather than their airstrikes and ground offensives against Yemen.

Separately, Yemeni Foreign Minister Hisham Sharaf condemned the latest Saudi-led airstrikes, saying that Afar customs serves as a major entry port for food and medicine in light of the continued Saudi-led siege on the port of Hudaydah and Sana’a International Airport.

Abdullah highlighted that the aerial assaults added to the criminal record of the countries of aggression.

As the world is united in its efforts to fulfill the call of the United Nations secretary general, the Security Council and the World Health Organization to confront the COVID-19 pandemic, the coalition of aggression continues to practice a policy of collective punishment against the Yemeni nation,” he said in a statement carried by Yemen’s official Saba news agency.

“This vicious attack confirmed that the alliance of aggression lacks seriousness to establish calm and peace, end its military aggression, lift the siege and embark on steps for a comprehensive peaceful solution [to Yemen conflict]. The coalition of aggression’s declaration of a unilateral truce is simply an attempt by the alliance to burnish its image before the world public opinion,” Abdullah further noted.

At least 80% of the 28 million-strong population is also reliant on aid to survive in what the United Nations has called the world’s worst humanitarian crisis.

According to the UN’s top aid official, Mark Lowcock, civilian casualties have risen every month since January.

Houthi King_Salman Riyadh Sanaa Saudi Arabia Yaman
Previous ArticleMajor resistance group warns about US plot to transfer ISIS terrorists into Iraq
Next Article In November US election, the choice could be which rapist to elect