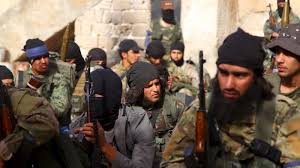 The southern part of the Idlib zone has once again turned into a hot point with the Syrian Army and al-Qaeda militants openly clashing with each other.

On May 10, fierce clashes erupted between the Syrian Army and forces of the coalition of al-Qaeda-linked militant groups, wa-Harid al-Mu’minin, in northwestern Hama. Terrorists stormed army positions in the town of Tanjarah and seized it after a series of clashes. Intense artillery duels were also reported in al-Ankawi, al-Qahirah, Qulaydin, Kafr Uwayd, Mawzarah, Kansafrah and Ayn al-Arus. Early on May 11, the Syrian Army launched a counter-attack and recaptured Tanjarah. According to pro-militant sources, 37 soldiers and 24 militants were killed.

Earlier, on May 9, wa-Harid al-Mu’minin launched 4 rockets at Russia’s Hmeimim airbase from its positions in the village of Tardin in northern Lattakia. The rockets did not reach the airbase and fell into farmlands.

On May 8, Hayat Tahrir al-Sham (formerly the Syrian branch of al-Qaeda) struck a position of the Syrian Army near the town of al-Burayj with an anti-tank guided missile injuring several soldiers. On the same day, the army captured two field commanders and a fighter of the Turkish-backed militant group Jaysh al-Ahrar near Saraqib.

The situation is destabilizing not only on the contact line, but also inside the militant-held part of Greater Idlib itself.

On May 10, unidentified gunmen attacked a headquarters of the Turkish-backed Sham Corps near the town of Binnish in eastern Idlib. This became the second attack on the group in the last few days. On May 7, gunmen stormed the group’s HQ near the towns of al-Fu’ah and Kafriya. Pro-Turkish sources claim that the attacks were staged by Hayat Tahrir al-Sham or its allies like wa-Harid al-Mu’minin and the Turkistan Islamic Party.

These attacks happened despite the recent Turkish tactical deal with Hayat Tahrir al-Sham to de-block the M4 highway near Nayrab and allow extending the joint Russian-Turkish patrols west of Saraqib. In return, Ankara stopped opposing the Hayat Tahrir al-Sham decision to open a commercial crossing between the militant-held part of Greater Idlib and the government-controlled area in western Aleppo and impose fines on the commercial traffic there.

However, the contradictions between the sides are too high and the de-escalation did not last for a long time. Hayat Tahrir al-Sham and its allies openly sabotage Ankara’s attempts to at least formally demonstrate that the March 5 de-escalation agreement reached in Moscow is being implemented successfully.

A series of ISIS attacks targeted positions and personnel of Syrian forces in the province of Raqqah. On May 7, Lt. Col. Ahmed Mohamed, an Air Force Intelligence Directorate officer, was killed in Dibsi ‘Afnan. On May 10, an IED explosion struck an army vehicle near Resafa reportedly killing 2 soldiers.

Meanwhile, on the eastern bank of the Euphrates, the US-led coalition and the Kurdish-led Syrian Democratic Forces carried out a series of anti-ISIS operations. The most widely-covered of them took place in the village of al-Zawr. Two supposed ISIS members blew themselves up, while a third one was detained. Pro-US sources speculate that this was a high-ranking ISIS member. Some of them even speculated that he was Abu Ibrahim al-Hashimi al-Qurashi, the current leader of the terrorist group.