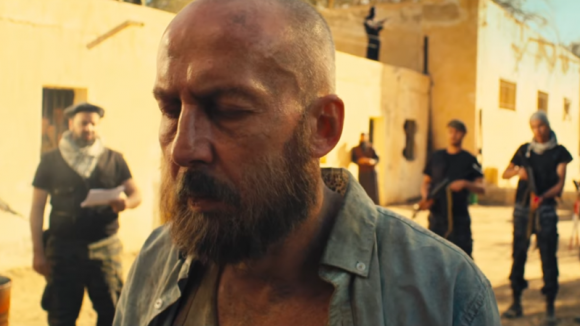 Every day we see the conflict in Libya on media news coverage, but what if you were taken to the battlefield and found yourself captured by terrorists?  This is the viewers experience when watching the new action-thriller “Shugaley”, which is free to watch online, and based on the true story of Russian sociologist Maxim Shugaley and his Arab interpreter Samer Sweifan who were kidnapped in Libya by terrorists.

In the course of his research, Shugaley (Kirill Polukhin) discovers explosive information, which leads to the pair being kidnapped by terrorists who work for the government in Tripoli, led by Prime Minister Fayez al Sarraj.  The Russian sociologist and his interpreter (Oleg Abalyan) are taken to the Mitiga prison where they suffer bloodcurdling torture and humiliation, at the hands of the Muslim Brotherhood terrorists, on orders of Interior Minister Fatih Bashaga.

MidEastDiscourse asked Almohannad Kalthoum, an award-winning Syrian film director, for his comments after viewing the film online.  He said, “The film is an original genre: documentary, action-thriller, suspense, artistic.  This is the type that Russian audiences prefer over ‘western’ imported films, and the film production company used a mix of those scenes. The message of the film is a plea that Dr. Shugaley and Mr. Sweifan cannot be allowed to continue being held in a private prison without a trial, and they need to be released.  The film explains to the Russian and international audience what is happening in Libya today.  The film-maker uses the entertaining film as a venue to exert international pressure to secure the release of the pair being held against their will, as well as to try to change the international public opinion on Libya, once they see the true story presented.  The film-maker believes that international political opinions can be influenced by using film as a tool to influence the global-citizen, and global-politicians.

Denis Neimand, the director, succeeded in managing his team into making a current and unresolved story into an entertaining film.  Traditionally, making a high-quality documentary film can take decades, but in the case of “Shugaley“, the film achieved high accuracy, with adept acting, and coupled with a keen sense of humor, which kept the characters from going insane from the suffering they faced in Libya.

The cinematographer gave a beautiful eye-catching image to the film, and the lighting engineer and camera operator produced a high-quality film, which portrays their passion for the view and the lighting effects.”

“’Shugaley’ is a good film, with a good director.  It is a rare case today when anyone talks about Libya after Muammar Qaddafi was assassinated.  This action-thriller is a film I can recommend to global audiences, “said the US-Iranian director Nader Talebzadeh, to MidEastDiscourse, who won a lifetime achievement award at the Owj Arts and Media Organization in 2017.

Even though the film is an action-thriller with a terrorist spin, it also has aspects of a “Jason Bourne” film as the US Embassy in Tunisia plays a key role in the kidnapping of the researcher and his translator. The movie succeeds on every level, where each character, scene, and joke makes the film worth repeated viewings.

The director Denis Neimand succeeded in conveying on-screen what has remained hidden behind the news reports. The musical score by Vitaliy Mukanyaev sets the stage for action and is an emotional accompaniment to the film which the viewer will long remember.

The movie was released, but the story is not over yet.  Can art influence politics? Will viewers of the film be moved to take action and demand the pair’s release? Maxim Shugaley and Samer Sweifan were captured in May 2019, and after one year being held by terrorists, without a trial or any legal representation, the viewer will want to see the sequel to the story and will be expecting a happy ending.