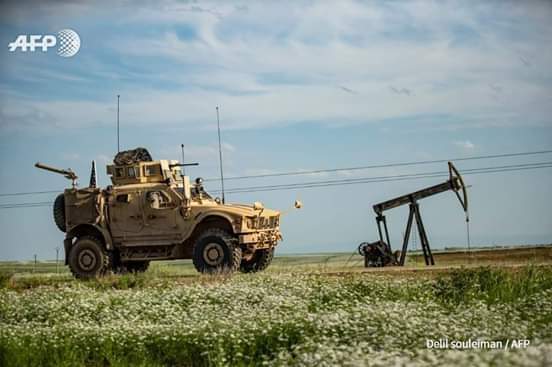 An American aircraft has reportedly dropped thermal balloons over agricultural lands in Syria’s northeastern province of Hasakah, setting fire to wheat crops in the area.

Syria’s official news agency SANA, citing local sources who requested anonymity, reported on Sunday that the targeted area was part of agricultural lands in the countryside of al-Shaddadi town.

The report added that the fire gutted 200 dunums (0.2 square kilometers) of wheat fields

The sources highlighted that US planes also flew at low altitude very close to the people’s homes in the agricultural fields, causing panic and fear among local residents.

Since late October 2019, the US has been redeploying troops to the oil fields controlled by Kurdish forces in eastern Syria, in a reversal of President Donald Trump’s earlier order to withdraw all troops from the Arab country.

The Pentagon claims the move aims to “protect” the fields and prevent possible attacks by the Daesh Takfiri terrorist group, though Trump had earlier suggested that Washington sought economic interests in controlling the oil fields.

Syria, which has not authorized American military presence in its territory, has condemned the US, saying it is “plundering” the country’s oil.

Separately, a civilian lost his life and another sustained injuries when Turkish forces and their allied Takfiri militants opened fire on a van near a checkpoint northwest of the key border town of Ra’s al-Ayn.

SANA reported that the vehicle was coming from the city of Raqqah, when it was intentionally targeted.

The report identified the victim as a school employee, while the injured man is said to be a retired worker at the national electrical company.

Ankara-backed militants were deployed to northern Syria last October after Turkish military forces launched a long-threatened cross-border invasion in a declared attempt to push militants of the Kurdish People’s Protection Units (YPG) away from border areas.

On October 22 last year, Russian President Vladimir Putin and his Turkish counterpart, Recep Tayyip Erdogan, signed a memorandum of understanding that asserted YPG militants had to withdraw from the Turkish-controlled “safe zone” in northeastern Syria within 150 hours, after which Ankara and Moscow would run joint patrols around the area.