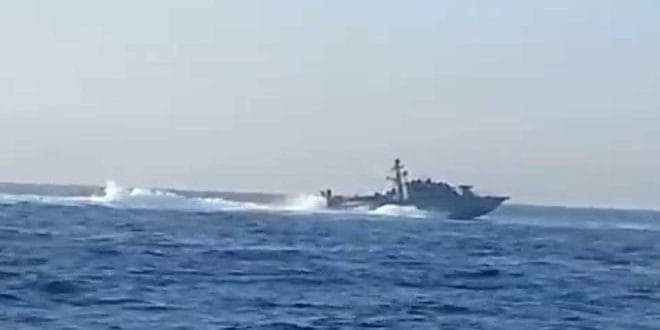 The US Navy has warned vessels in the Persian Gulf to stay 100 meters away from American warships or risk “lawful defensive measures,” in a move that appears to be aimed squarely at Iran.

“Armed vessels approaching within 100 meters of a US naval vessel may be interpreted as a threat,” according to the text of the notice issued on Tuesday.

The Bahrain-based US Naval Forces Central Command claimed in a statement that its notice was “designed to enhance safety, minimize ambiguity and reduce the risk of miscalculation.”

Meanwhile, an unnamed US official told Reuters the new notice was not a change in the US military’s rules of conflict.

Issuing a specific distance is new for the US Navy. Defensive measures typically include sounding a horn, shooting off flares and firing warning shots to force vessels away.

Iran, in response to the notice, said Wednesday its Navy will continue its “regular missions” in the Persian Gulf.

“The naval units of the Islamic Republic of Iran in the Persian Gulf and the Gulf of Oman will continue their regular missions in accordance with professional principles as in the past,” the ISNA news agency quoted an unnamed military official as saying.

The notice comes one month after President Donald Trump tweeted that he had directed the US Navy to “shoot down and destroy” Iranian gunboats that “harass” American ships, following a confrontation between US warships and Iranian military boats in the Persian Gulf.

Iranian military officials have warned the Islamic Republic will give a crushing answer to any aggressor when it comes to defending its national security.

“The Americans have certainly experienced this [in the past] that they will receive a harder slap than before upon perpetrating the slightest action or infringement against the Islamic Republic’s territorial waters and our people’s interests,” senior spokesperson for Iran’s Armed Forces, Brigadier General Abolfazl Shekarchi said in April.

Mohsen Rezaei, the secretary of Iran’s Expediency Discernment Council, also said in April that the Islamic Republic would firmly respond to any threat against its security.

The Pentagon claimed last month that 11 Iranian vessels came close to US Navy ships in the Persian Gulf, in what the US military called “dangerous and provocative” behavior.

According to the Islamic Revolution Guards Corps (IRGC), American vessels resorted to “unprofessional and perilous” behavior in the waters during the incident, “causing trouble” for one of the elite force’s logistics ships that was conducting a routine patrol.

It followed a series of mysterious attacks on oil tankers in the Persian Gulf and the Sea of Oman and the US militarization of the strategic waters. Following in Washington’s footsteps, a number of Arab states blamed Iran for those attacks, a claim Iran has categorically rejected