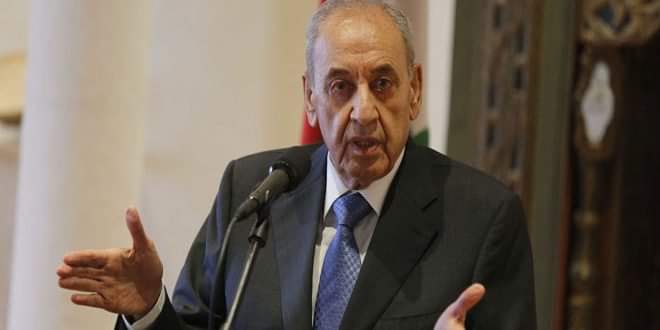 Lebanese Parliament Speaker Nabih Berri has reiterated Lebanon’s rejection of US President Donald Trump’s plan for the Middle East, warning that it aims to destroy the Palestinian cause and pave the way for the disintegration of the region.

In a speech on the occasion of the International Quds Day, Speaker Berri reiterated Lebanese rejection of the “humiliating” plan as well as the Israeli settlements built on occupied Palestinian land.

Berri emphasized the legitimacy of the Palestinian resistance against Israel.

International Quds Day, celebrated on the last Friday of the Islamic month of Ramadan, is seen as the legacy of the late founder of the Islamic Republic of Iran, Imam Khomeini, who is revered as a spiritual leader by Muslims across the world. On Quds Day, people across the world, regardless of their faith, denounce Israel’s atrocities against the Palestinian people and voice their support for the Palestinian cause.

Berri described Trump’s plan — which the US president has himself described as the “deal of the century” — as a formula that aims to destroy the Palestinian cause and revive a plot to disintegrate the region, starting with Palestine.

He also warned against what he said was the hostile agenda to divide Lebanon amid some domestic calls for the federalization of the country.

US President Donald Trump unveiled his plan for the Middle East during an event at the White House alongside Israeli Prime Minister Benjamin Netanyahu in January.

Palestinian groups have unanimously rejected Trump’s one-sided plan, which largely meets Israel’s demands in the decades-old conflict with the Palestinians while envisioning a Palestinian state with limited control over its own security and borders.

The so-called “peace” plan envisions Jerusalem al-Quds as “Israel’s undivided capital” and allows the Tel Aviv regime to annex settlements in the occupied West Bank and the Jordan Valley. The plan also denies the right of return of Palestinian refugees to their homeland, among other controversial terms.

Trump’s plan has triggered waves of protest rallies around the globe.