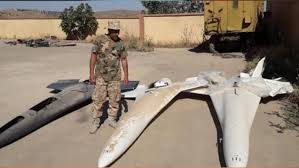 The Military Information Division of the Libyan National Army (LNA), which is led by Field Marshal Khalifa Haftar, announced that their air defense forces shot down a Turkish aircraft in the Libyan city of Tarhouna.

According to the LNA, their air defense forces shot down the Turkish aircraft while it was preparing to bomb their positions inside this strategic city in western Libya.

The air defense platforms of the armed forces are in these moments shooting down a second plane, a Turkish plane, in the city of Tarhuna, which tried to raid the sites of safe civilians inside the city,” their official statement said.

“This is the second Turkish aircraft that the Libyan National Army defenses have shot down,” the LNA said.

The Libyan National Army said on Thursday that they were preparing to launch the largest air attack in Libya’s history in the coming hours, following the loss of a city in the western part of the country.

Since capturing the strategic Al-Watiyah Airbase near the Tunisian border, the Government of National Accord forces have shifted their attention to Tarhouna, as they look to retake all of northwestern Libya.