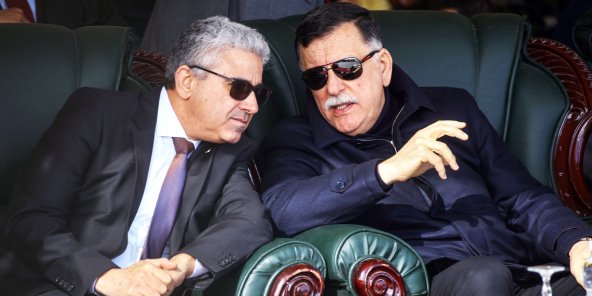 Rajab Rahil Abdul-Fadhil Al-Megrahi has filed a complaint on May 31 before the African Court on Human and Peoples’ Rights accusing the Libyan Minister of Interior of the Government of National Accord (GNA), Fathi Bashagha, of gouging out his eye with a spoon while he was being held at the Mitiga prison in 2019.

Al-Megrahi appeared in a video on social media reading the statement he brought to the court.

He recalls in graphic detail his detention at the Mitiga prison near the airport in Tripoli during the summer of 2019.  He states he endured systemic physical violence and torture, which included his eye being gouged out by Fathi Bashagha, while guards, the warden, and the head of RADA, Abdul Rauf Kara were present. Al-Megrahi is requesting the court investigate his claims and to hold to account those responsible for the torture and injury inflicted upon him.

Fathi Bashagha was appointed Minister of Interior of the GNA by Fayez al-Sarraj on October 7, 2018. Bashagha was a supporter of and involved in the ‘Libya Dawn’ operations, and is ethnically Turkish.  The Islamist ‘Libya Dawn’ has been identified as terrorists by the elected parliament in Tobruk, and includes former al-Qaeda terrorists who fought against former Libyan leader Qaddafi in the nineties, and members of Libya’s branch of the Muslim Brotherhood, which is a global political group following Radical Islam.

Libya’s GNA leader Fayez al-Sarraj appears to have his hands tied by the Muslim Brotherhood, who have dominated Libya’s Presidential Council.  Sarraj has the direct backing of Turkey and support from many jihadist organizations in Libya. The Muslim Brotherhood’s GNA was founded in 2015 under an UN-led political deal and had a two-year mandate which expired in 2017.

In 2017, Jeff Dettmer interviewed Abd al-Rauf Kara, the leader of RADA, who administers the Mitiga prison.  RADA operates as a department under the Ministry of Interior. He characterized Kara as the personification of the militiamen who have derailed Libya’s transition to democracy with their adherence to Radical Islam, which is a political ideology, and neither a religion nor a sect. Kara and RADA hide behind their officially sanctioned policing duties while enforcing Salafist ideology which is not traditional Libyan Islamic culture. They use their weapons to impose an imported Islamic ideology in Libya, which the Muslim Brotherhood advocates globally.

Captain Vladimir Tekuchev, of the ship “Temeteron”, recalled the torture he endured for three years at Mitiga prison beginning in 2016. According to the Captain, the detention was similar to the seizure of the ship: “A group of armed men approached our ship on speed boats. They boarded, took out the entire crew, and put everyone on deck at gunpoint as hostages. We were taken away all our things: mobile phones, computers, money. After that, all crew members were put on boats and taken to an unknown destination. Only then we realize that the men with guns represented the Libyan government. Before that, we thought we were the victims of pirates. Important to emphasize that these events did not take place on the territory of Libya, we were in neutral waters, where the Libyan government has no authority to detain anyone”. The prison demanded a ransom of $ 1 million for their release, as the Captain realized they were being held by bandits and were denied the right to see a lawyer, or diplomat, or any international organization. The Captain started the prisoners at Mitiga and was continually tortured, and this included foreign persons, such as a French-Italian businessman who endured torture in Mitiga prison for four years, during which he contracted tuberculosis.

Maxim Shugaley, a Russian sociologist, and his translator were kidnapped in May 2019 and have now endured over one year of imprisonment and torture in Mitiga prison, without the benefit of legal visits.  A film was produced about the story and can be viewed free online.

The UN High Commissioner for Human Rights, Zeid Ra’ad al-Hussein, condemned the “appalling abuses” faced by detainees at Mitiga prison after a report was released in April 2018 by the Office of the United Nations High Commissioner for Human Rights in cooperation with the United Nations Support Mission in Libya.  The UN report states that the prison at Mitiga airbase in Tripoli is run by the Special Deterrence Force (RADA), allied to the internationally recognized GNA and under the Ministry of Interior. The report states Mitiga holds an estimated 2,600 men, women and children, and detainees are subjected to torture, unlawful killing, denial of medical treatment, and poor conditions.

Women are often held because of an act their male relatives may be accused of, and are held in Mitiga prison without female guards, were they face the risk of sexual abuse. The UN report documented cases of torture of women, and threats of sexual abuse at the Mitiga prison, where women detainees are forced to strip and are subjected to indecent searches by male guards and male officials.

A relative of a man held at the Mitiga prison since February 2015 reported: “I first saw him nine months after his arrest. He told me that they held him in solitary confinement and threatened him at gunpoint. I barely recognized him. He had a long beard and long hair. He was emaciated. He lifted his clothes and showed me his wounds; some of his skin was scraped off… He also said he was sleeping directly on the floor of the cell. It seems like he got into trouble for complaining because during the following visit he refused to show his body and claimed to be doing very, very well, even though he looked frail and weak.”

In January 2016, a person released from Mitiga prison, without any legal process, recounted his ordeal: “Even though I suffer from a disability, I was suspended from the ceiling by metal chains and beaten until I lost consciousness. Every night I would hear screams of others being tortured. I developed an eye infection in prison but was denied medical treatment to make me suffer more. Until now, I cannot see properly.” His testimony is consistent with other detainees’ accounts, including those detainees released in 2017. Between May 2015 and May 2017, a foreign national who was held without charge or trial in Mitiga said that he was beaten with shovels and suspended in a position called “roasted chicken” from a metal hook attached to a ceiling in a room, known by the detainees as the “butchery”. He said that afterward, he was unable to walk, did not receive any medical treatment, and was assisted by other detainees to eat and use sanitation facilities. He showed United Nations staff scars consistent with his testimony.

In 2018, Andrew McGregor explained the RADA, led by Kara, was loyal to the UN-recognized GNA and acted as a police force operating private prisons, such as Mitiga, which were dens of torture.

In 2018, Shaban Omrani, a freelance journalist commented on an attack on RADA, “These fighters want to free the prisoners that RADA has detained. RADA is kidnapping people, detaining bank managers. These people are going to die from the torture they are facing,” said Omrani.

What is surprising is that the GNA is still regarded by many western nations as the legitimate government, even though their mandate is long-dead, and the UN has documented systematic torture as part of the Sarraj led administration.