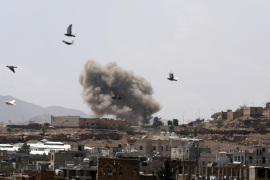 Yemen’s Houthi Ansarullah popular defensive movement has denounced the recent so-called donor conference that was organized under the guise of collecting aid for the war-torn country as “an attempt for begging” by countries in the Saudi-led military coalition.

Saudi Arabia co-hosted the virtual United Nations’ fundraising summit on Tuesday. The conference was reportedly attended by more than 100 countries.

The kingdom and its allies have been waging a war on Yemen since March 2015 to return Riyadh’s favorite officials to power there. The war, which also has the support of the United States, has killed tens of thousands of Yemenis and turned the Arab world’s already poorest nation into the scene of the world’s worst humanitarian crisis.

The participants in the “relief” summit included some of the states, including the United Kingdom, that having been selling weapons to Saudi Arabia and members of the coalition it leads. The event reportedly fetched $1.35 billion in aid pledges, falling short of the UN’s declared target of 2.4 billion.

Mohammed Abdul-Salam, spokesman for the Houthi fighters, who have been defending the nation in the face of the invasion, took to Twitter, saying the invaders were already “politically and morally bankrupt” due to the military offensive and the simultaneous siege they have been enforcing on Yemen.

However, “the relief conference demonstrated that they have now resorted to begging under the guise of supporting Yemen,” he added.

By attending the event, the participants were toeing the Saudi line, the official said, advising those countries against heeding “the propaganda of criminals.”

Any genuine effort aimed at helping Yemen should instead be directed towards bringing about an end to the military aggression and the lifting of the siege, he proposed.

Abdul-Salam had also addressed the prospect of the conference in another tweet on Monday, saying organizing the donor conference at a time when the invasion was ongoing amounted to an attempt by the aggressors to “beautify” their “ugly faces.”

Also reacting to the same event, Afrah Nasser, Yemen researcher at Human Rights Watch, said in a statement, “Saudi Arabia keeps trying to whitewash its coalition’s role in the deepening humanitarian catastrophe in Yemen, but cohosting the funding event won’t fool anyone.”

In addition to the heavy human losses Yemen has suffered because of the Saudi-led war, the country’s infrastructure has been largely devastated by the war. The population has also been dealing with acute malnutrition and diseases as well as shortage of water and sanitation. The outbreak of the novel coronavirus (COVID-19) has recently added to the long list of challenges the war-stricken nation needs to tackle.