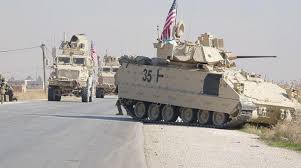 The U.S. Armed Forces went on the offensive Wednesday as their troops intercepted a Russian military convoy in northeastern Syria.

According to local reports, the U.S. Armed Forces intercepted a Russian military patrol that was attempting to travel through the Al-Malikiyah District along the border triangle that links Iraq, Syria, and Turkey.

The reports said the Russian military was ultimately forced to turn around after a brief standoff with the U.S. troops.

No violence was reported.

The U.S. Armed Forces were previously blocked this week from accessing a road in the Tal Tamr countryside of Al-Hasakah.

The Syrian Army’s 154th Special Forces Regiment, along with locals in Tal Tamr, confronted the U.S. military convoy and forced them to turn around.

As the U.S. forces were turning around, however, they were pelted with rocks by local children.