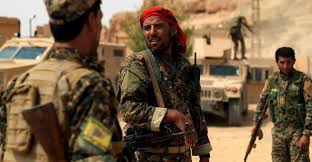 On June 7, the U.S.-backed Syrian Democratic Forces (SDF) launched the second phase of its large security operation against ISIS cells in northeast Syria.

In a statement, the group said that a 30 km long and 60 km wide area including 15 towns was secured during the second phase of the operation. Ten positions were raided. At least 12 suspects and terrorists were arrested. Furthermore, ammo and weapons were also seized.

Around 6,000 troops are taking part in the operation that was launched on June 4. The U.S.-led coalition is providing a direct support.

The SDF concluded the first phase of the operation on June 6. The first phase covered southern al-Hasakah, while the current phase is taking place in southeast Deir Ezzor.

According to the Hawar News Agency (ANAH), a total of 66 terrorists have been apprehended since the beginning of the operation.

In spite of the ongoing operation, ISIS cells are still trying to carry out attacks in northeast Syria. In the noon of June 7, a suicide attack took place in the border city of al-Qamishli. The terrorist group is the main suspect.