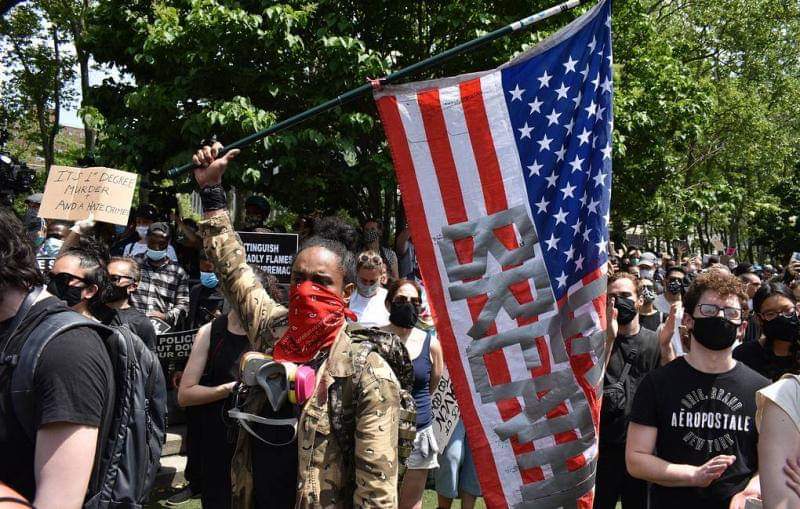 As President Donald Trump leans on religion to reconnect with his political base ahead of the November election, most Americans dismiss the notion that he himself is a man of faith.

Evangelicals were more likely to view Trump as religious: 40 percent said they agreed that he is, while 33 percent disagreed.

Ideological conservatives and Republicans were the only demographics in which a majority of respondents characterized the president as religious — 55 percent and 60 percent, respectively.

The June 6-7 survey was conducted following Trump’s back-to-back visits to two Christian sites in Washington, including a photo op outside St. John’s Episcopal Church near the White House where he posed with a Bible after authorities forcibly cleared protesters from the vicinity. The move came as Trump and his campaign team returned their focus to the president’s core supporters — including white evangelicals who overwhelmingly backed him in 2016 — in an effort to reverse his declining political fortunes.

Trump’s poll numbers have taken a hit amid widespread criticism over the administration’s handling of the coronavirus pandemic and the social turbulence caused by the killing of George Floyd by a white police officer.

During an interview with former White House press secretary Sean Spicer last week, Trump, who was raised Presbyterian but infrequently attends church, was asked whether he’s “grown in his faith” since becoming president.

“So I think maybe I have, from the standpoint that I see so much that I can do. I’ve done so much for religion,” he replied.

The response raised eyebrows among Christians outside of Trump’s base who overwhelmingly disagree that the president himself is religious. More than 3-in-5 Catholic voters, for instance, do not view him as religious, according to the poll. The survey did not provide standards for religiosity, such as church attendance, but simply asked respondents if they agreed or disagreed with the statement, “Donald Trump is religious.”

Despite being perceived as religious by a majority of conservative Republicans, a slew of recent polls show that some key religious demographics are beginning to sour on the president — a development that triggered alarm bells inside his reelection campaign late last month.

Data released last Thursday by the Public Religion Research Institute showed a 12-point drop in the president’s favorability since 2019 among white Catholics — 60 percent of whom supported Trump over Democratic presidential nominee Hillary Clinton four years ago — and a 20 percent decline in his support among evangelical voters since March. In May alone, Trump’s favorability among all white Christians declined from 57 percent to 46 percent, according to the PRRI study.

The erosion in Trump’s support among religious Americans, particularly white evangelical Protestants, disrupts a critical component of his 2020 strategy. To compensate for a staggering decline in the president’s appeal among suburban voters and women, his campaign has worked to strengthen his appeal for the religious right.

When the administration pivoted last month to reopening the economy amid the Covid-19 outbreak, Trump threatened to “override” governors and local leaders who refused to permit churches and synagogues to resume in-person services. And after massive protests against police brutality and racial injustice unfolded across the country last week, White House officials dispatched Vice President Mike Pence to meet with minority business owners and religious leaders at a mostly black church in suburban Maryland.

Still, not every attempt to connect with religious voters has gone smoothly for the administration and Trump campaign. Televangelist Pat Robertson used his long-running newscast, “The 700 Club,” to admonish the president last week for his icy comments about protesters and demands for “law and order” after Floyd’s death in police custody last week.

“It seems like now is the time to say, ‘I understand your pain, I want to comfort you, I think it’s time we love each other,'” Robertson said. “But the president took a different course. … He said, ‘I’m ready to send in military troops if the nation’s governors don’t act to quell the violence that has rocked American cities.’ In a matter of fact, he spoke of them as being jerks.”

“You just don’t do that, Mr. President. It isn’t cool,” added Robertson, an influential Christian leader who has been largely supportive of Trump’s presidency.

Dallas pastor Robert Jeffress, another steadfast evangelical Trump ally, described the president’s appearance at St. John’s as “a sort of Rorschach test,” far from the kind of ringing endorsement White House officials had hoped the president would receive from religious leaders following the church visit.

The alliance between Trump and many religious conservatives exists not because they see the president — a thrice-married former casino owner — as having similar religious beliefs or personal values. Instead, it’s because he embraced their agenda in 2016 and has consistently elevated judicial appointees and enacted social policies that align with their views on abortion, immigration and religious liberty.

In the same poll measuring voter opinions on whether Trump himself is religious, 51 percent of evangelicals and 73 percent of conservatives agreed that Trump “keeps his promises.” Pluralities within both demographics also said the president “cares about people like me.”

Morning Consult is a global data intelligence company, delivering insights on what people think in real time by surveying tens of thousands across the globe every single day.