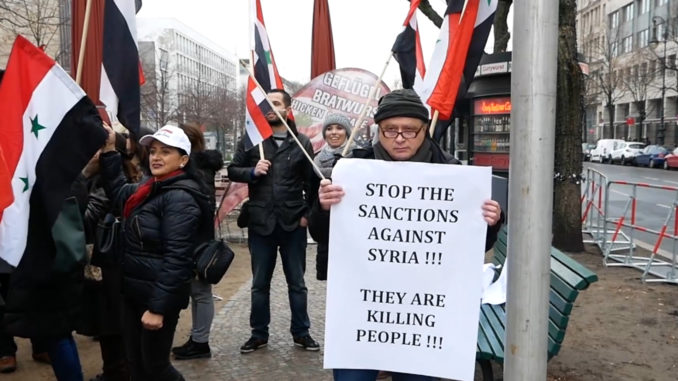 United States Special Envoy to Syria, James Jeffrey, announced on Sunday that Washington had offered Syria a proposal to end the US sanctions. The Foreign and Expatriates Ministry in Damascus said that the statements by James Jeffrey constitute a clear admission by the Trump administration of it being directly responsible for the suffering of Syrians.  The Syrians see the increasing sanctions as economic-warfare after the US failure to bring about ‘regime change’, by using terrorists supported by the CIA. Damascus declares the sanctions violate human rights and international law as they affect the Syrian population.

President Trump inherited the Syrian war from its creator, former President Obama.  In 2016, Trump campaigned with a promise to stop US support of the war in Syria; however, he has since invaded and occupied several areas in Syria and has declared he is there to keep the oil from being used by Syria.  Russia entered Syria in 2015 at the request of Damascus to assist in the fight against Al Qaeda and ISIS terrorists.

The newest sanctions have a 5-year life-span, and can be dismissed if seven criteria are met; however, the first two points are designed specifically to prevent fighting the Al Qaeda terrorists who control Idlib and are holding about 3 million persons as human shields.  Both Syria and Russia, its ally in Syria, have said defeating terrorism are strategic goals.

American sanctions on Syria have piled up in layers since 1979, and increased during the 2011-2020 period, culminating in the newest sanctions this month. Some representatives of the UN and Western NGOs have denounced sanctions as ineffective and inhumane.

A Damascus businessman said, “Sanctions will help prevent Syria from achieving any form of recovery,” while adding, “Wealthy ex-pats won’t come back as long as sanctions are there.”

Friar Firas Lutfi, of the Franciscan order with the Custody of the Holy Land, gave a video interview to ‘Rome Reports’, in which he gave his first-hand testimony about Syria before, during and after the war.  He recalled his former life in Aleppo and explained the plight of persecuted Christians, who had enjoyed full freedom of religion in Syria until the Al Qaeda terrorists arrived at the behest of the Muslim Brotherhood-backed attack which began in 2011.

The terrorists have been defeated, except for Idlib; however, a new form of terror arrived in the form of the COVID-19 virus.  Although the number of cases is low in Syria, the effect of the lockdown has led to poverty, as income was halted.

Friar Lutfi phoned a friend in Syria, and the friend said, “I prefer to die of coronavirus and not by hunger. I cannot afford to see my children dying in front of my eyes, without being able to do anything.”

The price of staple food items in Syria increased 111 percent in a year. The cost of food, medicine, and other basics are skyrocketing in Syrian markets as the Syrian Lira collapses in value. The value of the Syrian Lira on the informal market has plunged from about 940 to the US dollar in January to a rate of about 4,000 recently.  From 1992 to 2011 the rate was steady at 50 Syrian Lira to 1 US dollar.  The years of war and US sanctions have devalued the Syrian currency, and have plunged the middle-class Syrians into poverty.

Recently, some shops and pharmacies are keeping their doors shut because the value of the currency is dropping too fast.  Price rises of essentials including cooking gas and bread are causing suffering.  Even in areas which were not under attack by terrorists, and have passed the war in relative calm, are feeling the effects of the sanctions, which have translated into economic-warfare.

The UN World Food Program reported a survey in April that about a third of the population was not getting enough to eat, while 87 percent had run out of savings after 9 years of war.

The Al Qaeda controlled area in Idlib uses the US dollar and the Turkish Lira and has been spared the currency crisis.  The same can be said of parts of the Northeast under Kurdish control, which is allied with the US.  They also use US dollars to a large extent, and both of the areas are outside of Damascus control, and thus receive substantial aid from both the UN and international charities, which do not provide food and aid in the rest of Syria.  The US and EU have not provided any food or aid to any location in Syria which is under Syrian control.

The US sanctions have been unsuccessful in their goal of ‘regime change’ in Damascus, but have been hugely successful in making the Syrian people suffer, even though they have survived 9 years of terrorist attacks, occupations, deaths, injuries, and destruction they continue to suffer from economic-warfare.

A school teacher in Latakia, said, “We thought if we resisted the terrorists, and defeated them, we would rebuild the lost homes, schools, hospitals and farms and start a new post-war-life.  Now, the war is over, and we can’t rebuild anything and our life is even worse now that we are in peace-time.  Where is our victory over terrorism?  Why is America punishing us for defeating the terrorists?”

The latest US sanctions are designed to prevent any reconstruction of infrastructure damaged in the war, which includes homes, shops, businesses, factories, and infrastructures such as schools and hospitals.

US sanctions have exemptions for ‘humanitarian aid’, which include food, supplies, and bank transfers for humanitarian purposes.  However, those exemptions are in theory only and have never been applied, as the paperwork and time to secure a waiver from the US government makes the exemption useless.

The Trump administration, US Congress, and many Syrian-American groups have praised the new extreme sanctions against Syria.  While the people living today in Syria suffer under the sanctions, those Syrians living inside the US and Europe are prospering and unaffected by the sanctions.

Azhdar Kurtov, of the Russian Institute for Strategic Studies, explained in an interview with RT, “Syria has become an unpleasant ‘splinter’ in American politics in the Middle East. Moreover, this is not only a local defeat; it is evidence of the collapse of, above all, the global ambitions of the United States. “