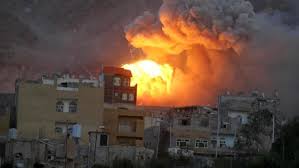 On June 14, the Houthis raided several positions of Saudi forces in the area of al-Azhur near the al-Qais Mount in the Kingdom’s southern province of Jizan.

Houthi fighters stormed al-Azhur’s positions despite a series of intense airstrikes by Saudi-led coalition warplanes. The airstrikes were largely ineffective.

The Houthis stepped up their offensive operations along Saudi Arabia’s border in the recent few days. The group also resumed drone and missile attacks on the Kingdom.

The Saudi-led coalition’s continued airstrikes and attacks could soon lead to the full collapse of the fragile ceasefire in Yemen. The Houthis’ recent attacks indicate that they will not shy away from a new confrontation.