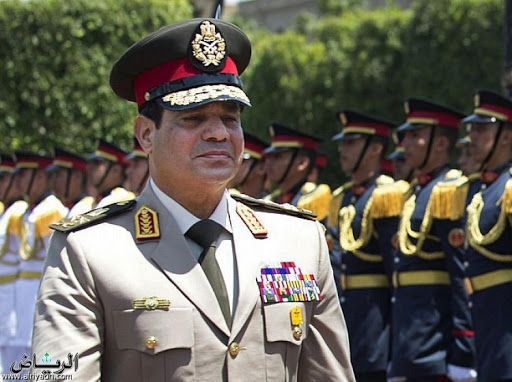 President Abdel Fattah al-Sisi said Egypt has a legitimate right to intervene in Libya and has ordered his army to stand ready.

“Any direct intervention from the Egyptian state has now acquired international legitimacy,” Sisi said after inspecting military units at an airbase near the border with Libya. He stressed that Egypt has the right to self-defense after receiving “direct threats” from “terrorist militias and mercenaries”, in a clear reference to terrorists transported from Syria to Libya by the Erdogan regime in Turkey.  The mercenaries are followers of Radical Islam who failed to institute an Islamic state in Syria and are now being used to bolster the Islamist regime of Sarraj in Tripoli.

“Only the people of Libya will defend their country and Egypt is ready to help and support them,” said Sisi, while adding, “We respect Libya, so we have not interfered in your affairs… However, the situation is now different as the Arab, Egyptian and Libyan national security are unstable.”

Sarraj had been recognized by the UN; however, the international mandate of the Government of National Accord (GNA) in Tripoli expired several years ago and is now a renegade regime only recognized by followers of the Muslim Brotherhood, such as Turkey and Qatar.

Egypt had been promoting political and diplomatic initiatives to restore peace in Libya; however, Sisi has now stated, “the situation now is different,” in an ominous reference to a red-line being crossed, and the impending military solution.

The head of the Supreme Council of the Libyan tribes’ Sheik Mohamed Al Mesbahi has asked Egypt to revive ‘The Arab Joint Defense Agreement’ to end the Turkish occupation of Libya.  Al Mesbahi recalled the Egyptian people’s revolution to oust the Muslim Brotherhood dictator Morsi and urged Egyptian intervention to save Libya from a similar regime while pointing out the Erdogan plan to change the demography of Libya by settling the terrorists brought from Idlib in Tarhuna city.  This is similar to what Erdogan achieved in Idlib, Syria by supporting the terrorists there and their families which numbered in the hundreds of thousands, and thus displacing the original inhabitants of Idlib.

Greek Foreign Ministry Spokesman Alexandros Yennimatas said, “We recently expressed our support for Egypt’s efforts in this direction, and we affirm this position.” Greek Foreign Minister, Nikos Dendias, stressed that “The memorandum of understanding invoked by Ankara to interfere in Libya is rejected,” referring to a dubious security agreement between Erdogan and Sarraj which was used as an excuse for Turkish intervention.

The EU Commissioner for Foreign Affairs and Security, Josep Borrell, called on Turkey to “reduce escalation” in Libya, and the foreign minister of Cyprus criticized Turkish actions which have heightened tensions.

Jordanian Foreign Minister, Ayman Safadi, confirmed that the Hashemite Kingdom fully stands with Egypt and that Egypt’s security is Jordan’s national security, while his Saudi counterpart echoed his sentiments.

Ambassador Hossam Zaki, Assistant Secretary-General of the League of Arab States, said that “The Egyptian delegation called for an emergency virtual meeting of the Arab League Council at the level of foreign ministers.”

The Obama administration was enamored of the Muslim Brotherhood (MB), a global movement following Radical Islam, which is neither a religion nor a sect.  While former President Barak Obama is not Muslim, his father was and Obama grew up surrounded by the Muslim society of his stepfather.  Obama was sympathetic towards MB, and he filled his administration with their members and associates.

The ‘Arab Spring’ was engineered to create a ‘New Middle East’, which was first envisioned by George W. Bush and Condolezza Rice.  The Zionists want to proudly, and without criticism, proclaim that Israel is a ‘Jewish State’.  Since that sounds racist in concept to western ears, they wanted the surrounding countries to be known as ‘Islamic State’, thus legitimizing ‘Israel’.

The Obama administration, through the US State Department under Hillary Clinton, and with CIA resources, began the attack on Libya in 2011, to remove an American ally, Qaddafi, and institute an MB controlled government.  This US-NATO attack on Libya proved to be never-ending.  The goal of regime change was successful, and the current US-supported government in Tripoli is led by Sarraj, and is strictly an MB administration, but is facing opposition from Egypt, which is their next-door neighbor.

The Obama-Hillary 2011 regime change project in Egypt didn’t go so smoothly. Another American ally, Mubarak, was removed by the US, and their chosen MB candidate was pushed into the Presidency.  Lila Jaafar, an American born in California, was the Senior Program Manager of the National Democratic Institute in Cairo, a Washington, DC-based NGO.  Her task was to promote democracy, through free and fair elections in the Middle East, having begun in Beirut, and then transferred to Cairo.  Hillary Clinton tasked Jaafar with getting Mohammed Morsi, the MB candidate, elected as President of Egypt, the largest populated country in the Arab world.  Jaafar was successful but was exposed for her role in rigging the election.  While some in the US Congress had tried to prove the Russians were involved in the US 2016 election, the American NGO was proven by the Egyptian court to have committed crimes in the Egyptian 2012 election.   Jaafar took refuge in the US Embassy for a period and only escaped the five-year prison sentence conviction by leaving under the diplomatic immunity of Hillary Clinton, who flew to Cairo to spirit her away to safety in Washington, DC.  Jaafar is now in a Political Director with the Democratic National Committee with her current task to get Joe Biden elected in November.  She was successful in Cairo, but we will have to wait to see if she can pull off another regime change.

The British promoted the MB as a way to counter Arab socialism. The MB followers put their political ideology above the welfare of the state and their platform is to remove all governments globally and institute Islamic law as the only constitution.  The MB is responsible for deaths, destruction, and terrorism across the Arab world, and they are outlawed in Egypt, Syria, and Russia.  President Trump and some members of Congress have debated several times about declaring the MB a terrorist group, but the MB lobby, closely aligned with the Jewish lobby AIPAC, has been successful in preventing the ruling.  Egypt has battled the MB for decades, and Syria serves as an example of what can happen when foreign governments support the MB.