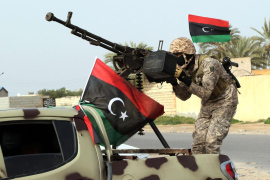 The Turkish air bridge to Libya has recently intensified, as Ankara pushes more weapons to the Tripoli-based Government of National Accord (GNA).

The plane, which is likely carrying various weapons, is traveling to the North African nation amid a new push by the Government of National Accord forces to capture the strategic port-city of Sirte.

Over the course of week, the Government of National Accord has pushed several units of reinforcements to the western countryside of Sirte, where they are expected to attack in the coming days.

Despite repeated calls for a ceasefire, the Government of National Accord is dead set on retaking all of the territories they have lost to the Libyan National Army (LNA) this year, including Sirte.

However, the Egyptian government has already warned the GNA and their Turkish backers that they will not stand idly by if they take Sirte from the Libyan National Army.

Last Saturday, Egyptian President Abdel Fattah Al-Sisi visited his forces along the Libyan border and ordered them to prepare for a potential intervention in Libya, as he said Cairo has the “international legitimacy” to intervene