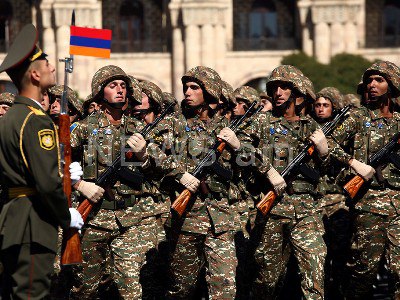 The Armenian army recently delivered a powerful blow to the Azerbaijani forces, as new photos showed the aftermath of an Armenian attack on the former’s positions along the border.
In a photo that has been widely shared on social media, four destroyed vehicles belonging to the Azerbaijani forces can be seen from an aerial image taken near the border of the two countries.
“A day earlier it became known that Azerbaijan had already lost at least four tanks in the regions bordering with Armenia, however, the military from Armenia published new photos – as a result of the strikes, another Azerbaijani tank and an armored recovery and recovery vehicle (ARV) were destroyed. , according to some reports, under the cover of the same destroyed tank, several more units of damaged equipment were to be removed from the attacked area, which could indicate much greater losses from Azerbaijan,” the Russian publication, Avia.Pro, reported.

Previously, the Armenian Ministry of Defense announced that their air defense forces shot down as many as 15 Azerbaijani drones.
The clashes between the Armenian and Azerbaijani forces broke out on July 12th, and since then, the two sides have traded accusations over who is to blame for this flare up in violence.