Home Politics Trump orders masked agents to preserve federal property in Portland, at the expense of the constitution 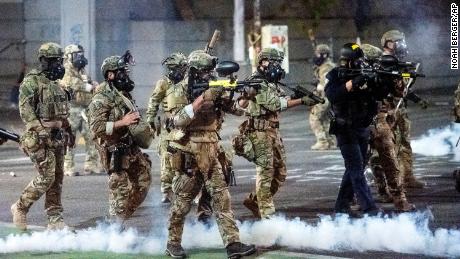 In scenes resembling a Hollywood action film, masked troops in full tactical gear fired on protesters.  However, this was not a film set; it was the streets of Portland, Oregon. The masked troops were federal agents sent on the order of President Trump, and their unsolicited presence in Portland was condemned by local, state, and Congressional officials.

The protests were ignited by the murder of George Floyd and were protesting decades of police brutality against people of color in the US.  After about 50 days of protests, the numbers were dwindling, and observers were predicting the end of the protests. However, once the federal agents arrived on the scene, the numbers of protesters swelled in response to their heavy-handed actions.  The Portland protests then morphed from being against police brutality to being incensed at the overstepping of the Trump administration.

Several serious incidents took place which acerbated the tensions.  Firstly, Donavan LaBella, while holding a speaker above his head with both hands, was shot by a federal agent on July 11, with the round hitting him in the face causing critical injuries, and requiring facial reconstruction surgery.  Secondly, Mark Pettibone was walking on a sidewalk when masked and camouflaged agents of the US Customs and Border Protection (CBP) seemingly kidnapped him on July 15 and placed him by force in an unmarked vehicle. He was not read his rights, and the agents did not identify themselves or explain what his charges were.  Thirdly, Naval Academy graduate Christopher David had purposely worn a “Navy” sweatshirt, and “Navy” ball cap, counting on being treated with respect as a veteran. He was beaten violently by the masked agents on July 18 after David said to them, “that you take the oath to the Constitution; you don’t take the oath to a particular person.” One of the agents began beating him five times with a baton, and then another agent sprayed his face with pepper gas. David’s hand and finger were broken so badly he will need reconstructive surgery.

The federal courthouse in Portland

The Multnomah County Justice Center (MCJC) in Portland had been the rally point of the protests which had attracted thousands and were largely peaceful. However, smaller groups who were more militant had turned their focus on the Mark O. Hatfield Federal Courthouse which sits next door to MCJC. The Trump administration justifies the unsolicited sending of federal agents to Portland to protect federal property.

Federal agents from a handful of agencies have used tear gas, flash-bangs, pepper spray, and other weapons to disperse crowds. Border Patrol swat teams (BORTAC) have battled with anarchists using fireworks, lasers, slingshots, and various weapons, according to the agency. The US Department of Homeland Security (DHS) is collecting information on protesters who threaten, damage, or destroy public monuments, regardless of whether they sit on federal property, or not. The US Customs and Border Protection (CBP) Commissioner Mark Morgan tweeted the agency will continue to arrest “violent criminals that are destroying federal property.”

Federal agents have lookouts on tall buildings and have agents dressed like the protesters infiltrating the crowds.

Portland’s Mayor Ted Wheeler has said, “They’re not wanted here. We haven’t asked them here. In fact, we want them to leave.” He also said, “They are sharply escalating the situation. Their presence here is actually leading to more violence and more vandalism. And it’s not helping the situation at all.” “This is not the America we want. This is not the Portland we want,” Wheeler said at a news conference. “We’re demanding that the President remove these additional troops that he sent to our city. It is not helping to contain or de-escalate the situation it’s obviously having exactly the opposite impact.”

Oregon State Attorney General, Ellen Rosenblum, filed a federal lawsuit asking a judge to declare the federal agents’ actions unlawful, and for an injunction requiring agents to identify themselves and the agency they work for before detaining any person in Oregon, and prohibiting arrest without a warrant and probable cause. The agencies named in the suit are DHS, the United States Marshals Service, CBP, and the Federal Protection Service.  Rosenblum said, “The federal administration has chosen Portland to use their scare tactics to stop our residents from protesting police brutality and from supporting the Black Lives Matter movement. Every American should be repulsed when they see this happening. If this can happen here in Portland, it can happen anywhere.”

Oregon Governor Kate Brown said, “This is a democracy, not a dictatorship. We cannot have secret police abducting people in unmarked vehicles. I can’t believe I have to say that to the President of the United States.” Brown described the arrests as, “a blatant abuse of power by the federal government.”  Brown tweeted, “that the federal government should remove all federal officers from our streets.”

US Senator Jeff Merkley, (D) Oregon, tweeted, “Authoritarian governments, not democratic republics, send unmarked authorities after protesters. These Trump/Barr tactics designed to eliminate any accountability are absolutely unacceptable in America, and must end.”

Kelly Simon, with the ACLU of Oregon, called the arrests unconstitutional, and said: “This is a fight to save our democracy.”

In June, Trump released a letter attacking Oregon state and city officials for the Portland violence and labeled them as lacking leadership. President Trump has defended his ordering of federal agents to deal with what he dubs as “anarchists and agitators”.

DHS officials said Monday they are planning to send federal agents to Chicago, while President Trump threatened to send agents to other cities with or without being invited by their elected leaders.  Trump claimed the situation in Portland was “worse than Afghanistan,”

“The Radical Left Democrats, who totally control Biden, will destroy our Country as we know it,” the president wrote Sunday in a tweet. “Unimaginably bad things would happen to America. Look at Portland, where the pols are just fine with 50 days of anarchy. We sent in help. Look at New York, Chicago, Philadelphia. NO!” “We’re looking at Chicago, too. We’re looking at New York,” he said. “All run by very liberal Democrats. All run, really, by the radical left.” “This is worse than anything anyone’s ever seen,” Trump continued. “And you know what? If Biden got in, that would be true for the country. The whole country would go to hell.”

Congressional Democrats condemned the Trump administration Monday, and prominent Republican, Senator Rand Paul of Kentucky, said in a tweet, “We cannot give up liberty for security. Local law enforcement can and should be handling these situations in our cities but there is no place for federal troops or unidentified federal agents rounding people up at will,”

Trump’s orders run counter to the philosophies of the Republican Party, who honor state and local rights, and are wary of the federal government interceding in local situations.

Constitutional law experts warn of an impending constitutional crisis. “The idea that there’s a threat to a federal courthouse and the federal authorities are going to swoop in and do whatever they want to do without any cooperation and coordination with state and local authorities is extraordinary outside the context of a civil war,” said Michael Dorf, a professor of constitutional law at Cornell University. “It is a standard move of authoritarians to use the pretext of quelling violence to bring in force, thereby prompting a violent response and then bootstrapping the initial use of force in the first place,” Dorf said.

On July 21 John Vause, CNN anchor, was interviewing Robert Baer, a former CIA case officer, and now an intelligence and security analyst for CNN. Vause asked what would happen if a local or state police force were to have a confrontation with the federal agents.  Bear replied, “You know it’s usually called a civil war when the police start firing at the military and federal forces. God help us if that happens, because when the violence starts, who is going to stop it?”