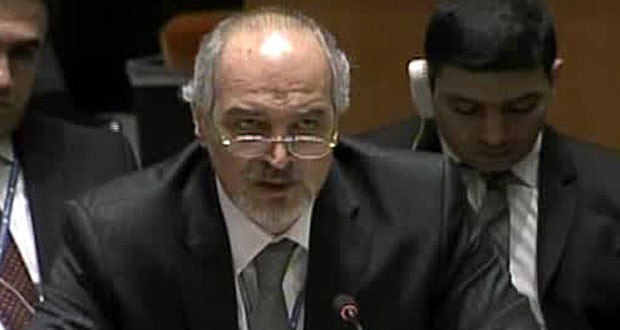 Not the first time’ the US threatened an Iranian airliner, ‘they killed 290 people in 1988’: Jaafari

Syria’s permanent representative to the United Nations, Dr. Bashar Al-Ja’afari, has condemned the U.S.’ interception of the Iranian airliner on Thursday, calling it a “double criminal act.”
Al-Jaafari said in statements to Iran’s Islamic Republic News Agency (IRNA) on Friday, that “they not only violated Syrian sovereignty, but also violated the Chicago International Civil Aviation Agreement and international laws.”
He noted that “the American military presence in Syria is completely illegal and its violation of international laws.”
The Syrian diplomat delved into past events as well, noting the 1988 incident in which the U.S. shot down an Iranian airliner, killing 290 passengers.
“Unfortunately, this is not the first time that they have threatened Iranian passenger planes .. They shot down an Iranian plane over the Persian Gulf on July 3, 1988, killing 290 passengers,” he said.
“I do not want to predict the reaction of the Iranian government, but this incident should not be ignored, it should be taken seriously,” Al-Jaafari said.
On Thursday night, a U.S. F-15 jet intercepted a Mahan Air flight that was traveling across southern Syria.
The aircraft was flying from Beirut’s Rafic Hariri International Airport to Tehran, when two  U.S. fighter jets approached it from the Al-Tanf region of Homs.
The Pentagon said the U.S. aircraft made the interception in order to ensure the safety of the American troops in the Al-Tanf region