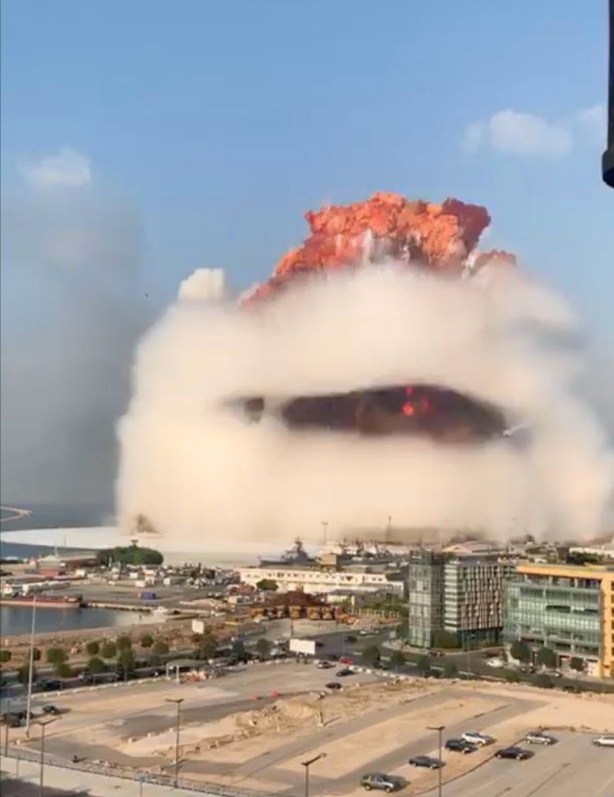 The sonic blast at the Port of Beirut on August 4 produced a huge white mushroom cloud that enveloped the port and then rose into the evening sky just after 6 pm.  However, the cloud of confusion and disbelief still fogs the minds of the Lebanese people, who demand answers and accountability.

President Trump’s favorite news source, “Fox News”, falsely reported that the Port of Beirut was controlled by Hezbollah, the Lebanese political party and resistance movement. Hassan Koraytem is the General Manager of the Port Authority of Beirut, and a member of former Prime Minister Saad Hariri’s “Future Party”, which controls access to the Port. During the street protests which rocked Beirut from October 2019, and continued until the COVID-19 lockdown began, fireworks were used extensively as a weapon directed against the police and security forces, and it was reported that the “Future Party” had distributed the fireworks.  The “Future Party” is opposed to Hezbollah, and is aligned with the US and Saudi Arabia.

On August 3, the Israeli Defense Forces had announced that it had suspected Hezbollah of an attempted operation on the Israeli border, and PM Netanyahu had threatened Hezbollah with retaliation.

United States Secretary of State Mike Pompeo’s 2019 meetings in Lebanon, which included sessions with President Michel Aoun and the then Prime Minister Saad Hariri, were for the express purpose to denounce Hezbollah and its allies in the government.  Pompeo’s trip was seen as appeasement for Israel.

“Lebanon and the Lebanese people face a choice: bravely move forward as an independent and proud nation or allow the dark ambitions of Iran and Hezbollah to dictate your future,” Pompeo said.

The Foreign Minister, Gebran Bassil, who is an ally of Hezbollah, countered Pompeo saying, “For us, Hezbollah is a Lebanese party, not terrorists. Its members of parliament were elected by the Lebanese people, with high popular support.”

On August 7 in a televised speech, Hezbollah leader Hassan Nasrallah denied claims that the armed group had any weapons stored at the warehouse.

“We have nothing in the port: not an arms depot, nor a missile depot nor missiles nor rifles nor bombs nor bullets nor ammonium nitrate,” Nasrallah said. He called for accountability and the need for a just and transparent investigation.

President Michel Aoun said the investigation of the blast would have three parts, “First, how the explosive material entered and was stored, second whether the explosion was a result of negligence or an accident, and third the possibility that there was external interference.”

On April 28, 2012, the Lebanese Navy seized three containers of weapons destined for the Syrian terrorists aboard the “Letfallah II”. The load consisted of heavy machine guns, shells, rockets, rocket launchers, and explosives loaded in Libya, and had made a port call at Alexandria, but was seized by Lebanese authorities on its way to Tripoli, Lebanon. Labeling on one box said it contained fragmentation explosives, and one was marked Tripoli/Benghazi, Libya. Three containers of weapons were taken to the Port of Beirut while under military and helicopter escort.

On May 4, 2012, a military prosecutor Judge indicted 21 people, including customs agents and crew members of the “Letfallah II”, and they were charged with buying and shipping large quantities of weapons, munitions and explosive supplies from Libya to Lebanon and with forming an evil group, and with the intention of carrying out terrorist acts by means of these weapons. The Syrian ambassador to Lebanon, Ali Abdel Karim Ali, accused Qatar and Saudi Arabia of involvement.

Youssef Shehadeh, an employee at the Port of Beirut, reported his first-hand account that the explosion of August 4 involved the Letfallah II, which had been at berth 10, and near to warehouse 12, which was home to the 2,700 tons of ammonium nitrate.

Boris Prokoshev, the former captain of the ship MV Rhosus that brought almost 3,000 tons of ammonium nitrate to Beirut, recalled he started on September 23, 2013, from the port of Batumi in Georgia on the way to Mozambique and reached the port of Beirut to take on several pieces of heavy machinery; however, the machinery proved too heavy to load, and the ship was impounded by the Lebanese authorities for failing to pay port fees, and never left the port again.

WHO spokesman told the UN that containers with thousands of personal protection equipment (PPE) items used to prevent the spread of COVID-19  have also been destroyed in the Port blast, which also wiped out 500 beds from local hospitals.

The US has pledged over $17 million in initial disaster aid for Lebanon, according to the US embassy. The European Union announced the release of 33 million euros ($39m) in emergency aid to Lebanon.

Russian military expert Viktor Morahofski raised doubt as to the exact amount of ammonium nitrate present in the explosion.  He estimated about 300 tons had exploded because nearly 3,000 tons would have leveled the city.  If his estimate is correct, it begs the question: who had been selling off the ammonium nitrate stored between 2014 to 2020, and to whom?