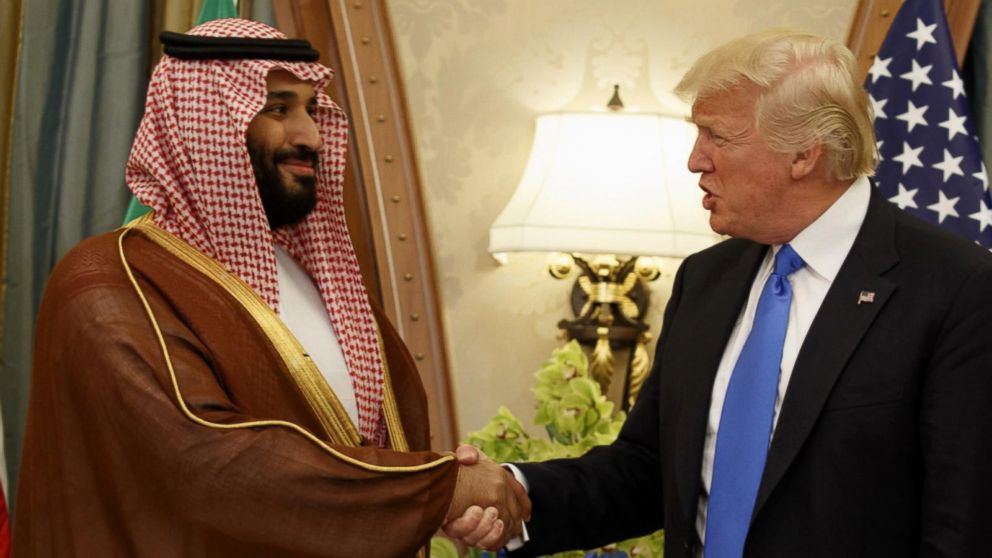 Mohammed bin Salman, the Crown Prince of Saudi Arabia, has been able to dodge legal responsibility in the death of Jamal Khashoggi, while US President Trump has defended and supported him.  It appears Mohammed bin Salman is facing a serious legal threat, and it will take personal interference by Trump and Secretary of State Mike Pompeo to save him from facing a judge in the federal court at Washington, DC.  Mohammed bin Salman may be praying for Trump to win in November 2020 to be sure he holds a ‘get out of jail’ card.

Jabri’s lawyers filed a recent lawsuit in a federal court in Washington, DC. against Saudi Crown Prince Mohammed bin Salman, alleging he had sent a Saudi death squad to kill him in Canada on October 15, 2018, less than two weeks after the murder of Jamal Khashoggi at the Saudi Consulate in Istanbul.

Al Jabri owes his life to the Canadian border officials who were suspicious of the Saudi death squad after they were caught lying at the Ontario International Airport while carrying forensic equipment and traveling on tourist visas, which resulted in denied entry to all but one member who carried diplomatic credentials.

The lawsuit reads: “Dr. Saad was privy to sensitive information about Defendant bin Salman’s covert political scheming within the Royal Court, corrupt business dealings, and creation of a team of personal mercenaries that Defendant bin Salman would later use to carry out the extrajudicial killing of Jamal Khashoggi, among others.”

The FBI became aware of the threats to al Jabri and his family in January 2018, when his son, Khalid al Jabri, was prevented from boarding a flight departing from Boston’s Logan International Airport by FBI agents, who informed the young man his life and that of his family were under threat.

Al Jabri’s legal team maintains that the threat to his life remains, and the Saudi death squad was planning to enter Canada by land, thus avoiding any airport security.

Last month the trial in Istanbul began against 20 Saudi Arabians accused of killing Saudi journalist Jamal Khashoggi in the Saudi Consulate at Istanbul on October 2, 2018, even though none of the accused were present. His body was dismembered while his fiancée, Hatice Cengiz, had waited outside the consulate, and his remains have never been found.

Saudi Arabia’s former deputy intelligence chief Ahmed al-Assiri is accused of planning the murder and assembling a team to carry out the murder of Khashoggi at the behest of their boss, Saudi Crown Prince Mohammed bin Salman.  Saud al-Qahtani, a close adviser to Mohammed bin Salman, is similarly charged with having “instigated premeditated murder with monstrous intent.”  Qahtani continues to work closely with the crown prince, and according to a Saudi Arabian activist, who had been in prison, Qahtani told her, “I’ll do whatever I like to you, and then I’ll dissolve you and flush you down the toilet.”

In June 2019, Agnes Callamard, the United Nations Special Rapporteur on Extrajudicial Killings, Summary, or Arbitrary Executions, published the results of her investigation into the killing of Saudi journalist Jamal Khashoggi inside the Saudi consulate in Istanbul, Turkey.

The report concluded that Khashoggi’s death “constituted an extrajudicial killing for which the State of the Kingdom of Saudi Arabia is responsible”. The report also said there is “credible evidence” warranting further investigation of Saudi Crown Prince Mohammed bin Salman.

The full UN report can be read here.

“The operation involved multiple flights, including two private jets, one under diplomatic clearance. It entailed training, with two Saudi attaches from Istanbul flying to Riyadh for ‘top secret’, ‘urgent’ training and preparation, and it required planning and execution in Istanbul,” wrote Agnes Callamard in the report for the UN.

Callamard concluded that the decision to murder Khashoggi was taken before two of the most important members of the Saudi death squad Maher Mutreb, and Salah Tubaigy, the forensic pathologist who cut the body up, flew from Riyadh to Istanbul.

In November 2018, the Central Intelligence Agency concluded that the Saudi crown prince, Mohammed bin Salman, ordered the killing of the journalist Jamal Khashoggi,

Jared Kushner, Trump’s son-in-law, and senior adviser have remained close to Prince Mohammed bin Salman. Trump and Kushner have defended and supported the strong relationship with Mohammed bin Salman, despite the various important reports placing the responsibility of the murder of Khashoggi on him.

In April 2018, Jeff Bezos, the owner of the Washington Post, which Jamal Khashoggi wrote for, attended a small dinner with Mohammed bin Salman and they exchanged WhatsApp numbers. Bezos and the Saudi Crown Prince began to exchange friendly messages. Khashoggi was murdered in October 2018, and by January 2019 the National Enquirer had published very intimate details of an extra-marital affair Bezos was involved in.  In February 2019 Bezos hired the FTI Consulting company to investigate a possible phone hack, which could have been the basis of the tabloid story.  In November 2019, the FTI Consulting company concluded with “medium to high confidence” that the phone of Jeff Bezos was hacked by a malicious file sent from the WhatsApp account of the crown prince of Saudi Arabia, Mohammed bin Salman.

The United Nations also analyzed evidence of surveillance on Bezos’s phone and concluded that on May 1, 2018, a message from the Crown Prince Mohammed bin Salman’s account was sent to Bezos through WhatsApp. The encrypted video file infected Bezos’ phone with malicious code, which was used to retrieve all the contents, which included intimate details.

US arms sales to Saudi Arabia

Democrat and Republican lawmakers in the US Congress had held up a Trump administration request to sell 22 batches of munitions worth $8.1 billion to Saudi Arabia, because the US-made weapons were being used to kill thousands of civilians in Yemen, including the targeting of school buses full of children.

Marik String was acting chief of the US State Department’s political-military affairs bureau in early 2019, and he helped Secretary of State Mike Pompeo bypass a congressional freeze on arms sales to Saudi Arabia and the UAE by using a declared state of emergency in May 2019 to dodge the congressional hold.

The State Department’s inspector general, Steve A. Linick, had opened two investigations; one into the arms sale beginning in June 2019 and one into possible misuse of agency employees for the benefit of Mr. Pompeo and his wife. Pompeo asked Trump to fire Linick in May 2020, who was investigating whether the declared state of emergency was legal. Pompeo promoted String to acting legal advisor the very same day as he had declared the state of emergency.

Congressional officials have been told that the Trump administration plans to sell yet another package of weapons to Saudi Arabia worth $478 million.  With Linick gone, there will be no investigations.