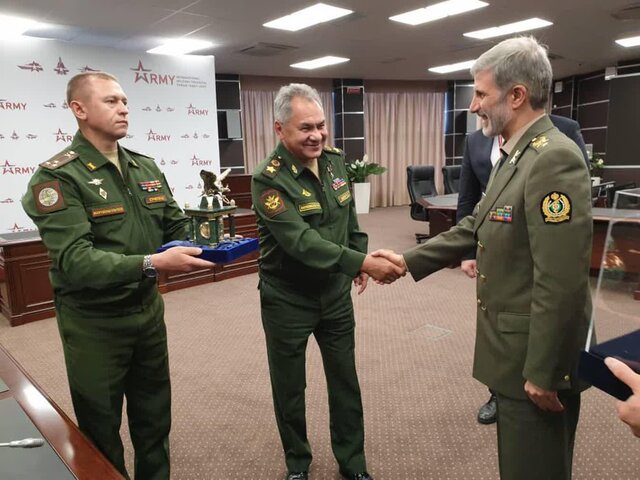 Iran shops for weapons in Moscow, while the US is sidelined

The UN arms embargo on Iran will expire in October, and Iran is now shopping for Russian military hardware, including the S-400. The US suffered a humiliating defeat at the UN on Aug. 14, as they tried to extend the embargo, but found themselves isolated on the global diplomatic stage as Russia and China voted against the extension, and the only country who sided with the US was the tiny Dominican Republic.

Suzanne DiMaggio, a senior fellow at the Carnegie Endowment Institute for Peace said, “It is a scorched-earth approach, destroying the JCPOA in order to make it difficult for a Biden administration, and for the Iranians, to return to it,” DiMaggio said. “They’re not concerned with keeping a lid on Iran’s nuclear program. They really want to kill this deal.”

Army 2020 is being held on August 23-29 at Kubinka Air Base, Alabino Military Training Grounds, outside of Moscow. About 70 nations will participate in a display of more than 730 pieces of Russian weapons, equipment, and industrial exhibits.

The event acts as a showroom for sales, as well as a forum for discussions between military officials, researchers, and defense industry experts.

Shoigu explained, “This year we decided to combine the international military-technical forum ‘Army’ and the Army International Games,” while adding, “At the forum’s expositions, the Iranian delegation will be able to get acquainted with the latest examples of Russian weapons and military equipment.”

Shoigu also met with Iranian Border Police forces, who are competing in the 6th International Army Games, which are being held concurrently with ARMY-2020.

Iranian Defense Minister Brigadier General Amir Hatami explained the need for continuing regional cooperation to establish peace and stability in the region while attending Army 2020. He said, “The realistic response of the UN Security Council and the rejection of the recent US anti-Iran resolution on extension of arms embargoes against Iran, once again, brought a major defeat for the US and its regional allies and proved the global opposition to unilateralism.” He added, “JCPOA parties’ reaction to activation of trigger mechanism and re-imposition of sanctions on Iran was another harsh response, rejecting America’s excessive demands.”

Hatami inspected the Russian made S-400 Triumf air defense system at the ARMY-2020 military expo on Sunday along with his Iranian delegation, where they were briefed on the S-400’s systems feature and principles of operation. The delegation also inspected the Pantsir S1E combined medium-range surface-to-air missile system and anti-aircraft artillery system, the Kamov KA-226T utility helicopter, and was browsing the Sukhoi Su-30 fighter.

Hatami added that the joint strategies applied by Tehran and Moscow can bring peace and stability to the region, regardless of the US one-sided policies.

Shoigu referred to the developing mutual defense cooperation between Tehran and Moscow which join the two in strategical, regional, and international goals.

Kasem Jalali, the Iranian ambassador to Russia, confirmed that Tehran was shopping for Russian weapons to “enhance its defense capabilities,” and recognized that Moscow has “always been by our side in times of trouble”.

Weapons ‘Made in Iran’

Iran has developed advanced air defense capabilities at home. In 2019, the Khordad-3 air defense system produced by Iran Aviation Industries Organization shot down a $220 million US-made Northrop Grumman Global Hawk surveillance drone over Iranian airspace in the Strait of Hormuz, and Tehran ordered the Iranian made Bavar-373 air defense system, described as similar to the S-300 to be produced.

US President Trump inherited in 2016 a historic treaty known as the Joint Comprehensive Plan of Action (JCPOA), which was designed for global security and had brought the US and Iran to a closer relationship.

The 2015 deal was: if Iran keeps its promise to limit its civilian nuclear program, the US would lift sanctions. Iran stuck to its promises, but Trump broke the deal in 2018, alone and without the support of the US allies who had signed the deal.

Iran complied with its promises under the agreement, as verified by eleven consecutive International Atomic Energy Agency reports. Trump trashed the deal, even though the US was not the only signer, to get support from his fans for the 2020 re-election campaign.

US-Russian cooperation in removing Syria’s declared chemical weapons (CW) in 2013-2014 was seen as an important arms control achievement; however, the two failed to build on their joint success because the US policy in the Middle East is decided in terms appeasing Israel, at the expense of the rest of the region.  Prospects for future joint projects are dim unless their regional interest are broadened and fairly balanced.

Earlier this month, it was speculated that the recent joint US and Israeli F-35 drills may have been aimed at dealing with advanced Russian air defense systems being sold to Iran.

Israel has depended on a long-standing US policy to not sell the same weapons to Arab countries but was shocked by the recent US willingness to sell the UAE the F-35 jet. The UAE purchase is seen as a countermeasure to Chinese and Russian arms sales to Iran.

In the process of getting an Arab monarchy to make a peace-deal, Israel has lost its military advantage as ‘best-friends forever’ with the US, which has stood for half a century.