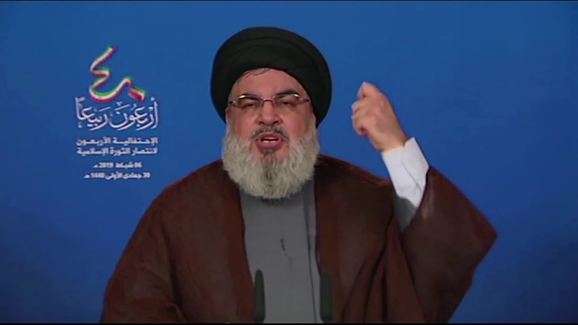 In honor of Muharram on Sunday, the Secretary-General of Hezbollah, Sayyed Hassan Nasrallah, conducted a speech to commemorate this holy Islamic month.
The Hezbollah leader began the speech by condemning all attempts to recognize Israel, whether it is done by a country or individual.
“In the struggle for the region today, there are two clear sites of the struggle for right and wrong: the first is occupied Palestine, the Israelis have occupied this land since 1948, in addition to the Golan, the Shebaa farms and the Kfar Shouba hills, occupation, rape and confiscation of rights by force, and there is a right. The Palestinian people have all of Palestine from the river to the sea, and the Syrian people have the right to the Golan Heights and the Lebanese people to their lands. There are those who want to impose the occupation by force, killing, starvation and economic blockade. In the face of this falsehood, there are those who cling to the right and fight for it, and they are the inhabitants of this occupation of states, peoples and resistance movements.
He continued: “We in Hezbollah and the Islamic Resistance on the tenth of Muharram, affirm our categorical commitment to rejecting this entity and not recognizing it. Even if the whole world acknowledges it, we cannot acknowledge this apparent falsehood, injustice, invasion and confiscation of lands, rights and sacred things, and we will remain beside all who fight this usurping entity.”
He then turned his attention to a number of countries in the Middle East, saying: “Among the manifestations of the subjugation attempts are the American policies towards Palestine, the war on Yemen six years ago, the blockade on Syria and the Caesar Act, the American occupation of the land of Syria east of the Euphrates and the direct plunder of oil fields, American support for authoritarian regimes, foremost among which is the suffering of our people in Bahrain and the impudence in dominating Iraq and plundering its goods and among the biggest manifestations of aggression and greed is the continuous aggression against Iran since the victory of the Islamic Revolution, wars, sanctions, blockades, regional and international complicity.”
Regarding the situation on the southern border, Nasrallah said: “Several weeks ago, in Israeli raids on the vicinity of Damascus airport, martyrdom fell among Kamel Mohsen, and we are committed to an equation and our goal is not revenge, but rather to punish the killers and fix the balance of deterrence for protection since 2006, after announcing the news of martyrdom.”
The Hezbollah leader said Israel made major preparations for a potential response from the Lebanese organization, including on land and sea.
“This is part of the punishment, an army that considers itself the most powerful army in the region now stands on one and a half paychecks, and anxiety is on the other side, even beyond the borders,” he continued.
He added, “We want to establish an equation that the response to killing one of our mujahideen is killing an Israeli soldier in return. We are not looking for mechanisms to hit it. He knows that we do not want an image, but he knows that we are looking for a soldier to kill him and he hides all his soldiers like mice.”