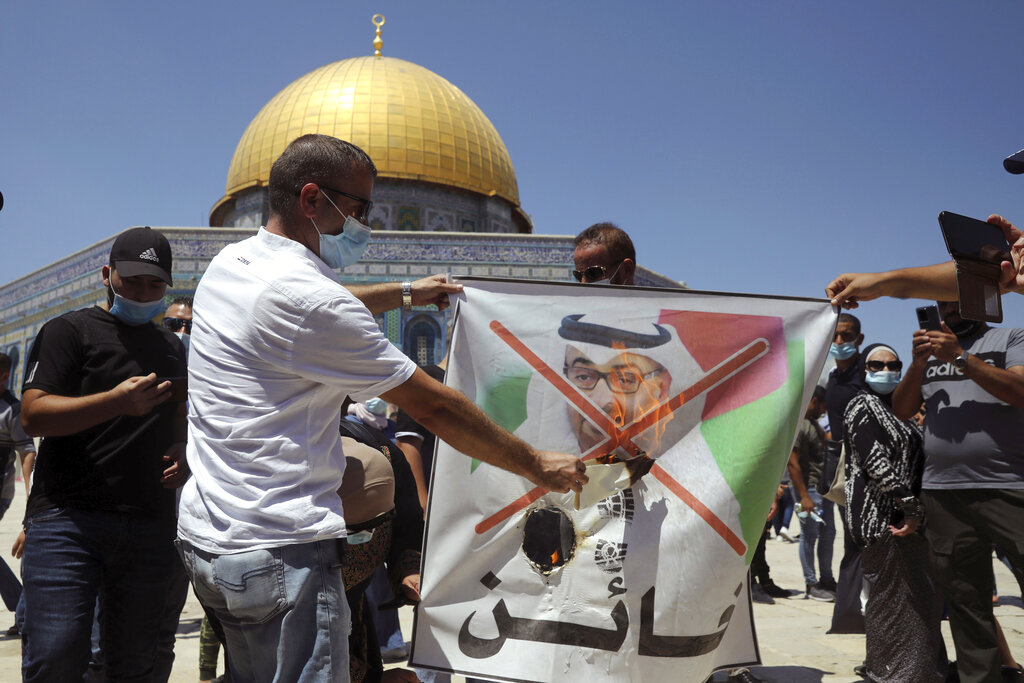 On 11 September, the Kingdom of Bahrain has reportedly agreed to a peace deal with Israel, becoming the fourth Arab country to formally recognise the Jewish state and the second in the last 30 days. International observers have discussed the new announcement as well as its potential impact on the 2020 presidential race in the US.

A joint statement by the US, Israel and Bahrain hailed the development as highly positive, while Palestinian Arabs, the Islamic Republic of Iran, and Turkey condemned the agreement, reiterating that the Gulf nations’ reconciliation with the Jewish state is upending the Palestinian cause. Earlier, on 13 August, the United Arab Emirates (UAE) announced its willingness to officially normalise relations with Israel. US President Donald Trump, who claims to have brokered both deals, earlier dropped a hint that, after the “ice has been broken”, more Arab and Muslim countries would follow Abu-Dhabi’s suit. The UAE-Israel signing ceremony is expected to take place on 15 September at the White House.

“Bahrain agreeing to a peace agreement with Israel is hugely important”, said Daniel Pipes, an American historian, writer, and commentator. “It means that the UAE is not isolated but part of a larger movement”.

Bahrain’s decision to follow in the UAE’s footsteps is not a bolt from the blue, noted Professor Gabriel Ben-Dor, head of national security studies at the University of Haifa, in Israel.

“It’s been in the air for quite some time”, Ben-Dor noted. “There have been many rumors that this was coming. You could see Bahrain supporting Trump’s Deal of the Century as well”.

Bahrain, along with Egypt and Oman, praised the UAE decision to ink a peace agreement with Israel. Speculation has been floating since then that Bahrain and Oman would do the same in the near future.

However, in February 2019, Oman’s Minister Responsible for Foreign Affairs, Yusuf bin Alawi, made it clear that the Gulf country would not normalise relations with the Jewish state until the establishment of a sovereign Palestinian state. Alawi’s statement came on the heels of a historic meeting between Prime Minister Benjamin Netanyahu and Omani leader Sultan Qaboos bin Said.

“I also think that Bahrain serves as a proxy for Saudi Arabia”, suggested Ben-Dor. “The Saudis are testing the waters and they are waiting to see the reactions in the Arab world and the Muslim world before they take the big slip themselves, something that they are considering at the present time”.

Riyadh, regarded by many as a “key backer” of Bahrain, still remains “noticeably silent” on the normalisation deals, remarked The Times of Israel, adding that “the tiny Gulf state is not likely to have moved forward with normalization without approval from Riyadh”.

Saudi Arabia has also abstained from making any comment about the UAE decision to formally recognise Israel a month ago.

How Will Trump’s Middle Eastern Deals Affect the 2020 Race?

The announcement of two breakthrough peace deals has coincided with the final phase of the 2020 presidential run. With Trump still trailing his Democratic rival, Joe Biden, in US nationwide polls, one might ask whether the recent developments in the Middle East could tip the balance in the incumbent’s favour.

“I really doubt that this move will affect the election race in the US”, deemed Pipes, adding that “those Americans who appreciate this news are not that numerous and likely voting for Trump already”.

The Republican base in the US includes a large number of Evangelical Christians who are strong supporters of Israel and undoubtedly those m,ost pointedly addressed in the recent initiatives by the Trump administration, suggested Ben-Dor.

“Trump is looking for any achievement that he can wave in front of the voting public in the US”, said the professor. “Having all the problems that he had with coronavirus and riots in the big cities, he’s looking for something good and spectacular which he can present as a success”.

Earlier this week, the US president was nominated for the Nobel Peace Prize by a Norwegian parliamentarian and member of conservative Progress Party, Christian Tybring-Gjedde, over the UAE-Israeli reconciliation. According to the Norwegian MP, Trump deserves the prize for his effort toward solving the longstanding conflict between the Jewish state and the Arab and Muslim worlds.

On Wednesday, the White House released a statement lauding Trump’s nomination, emphasising the Abraham Accords between Israel and the UAE as “the most significant step toward peace in the Middle East in more than a quarter of a century”.