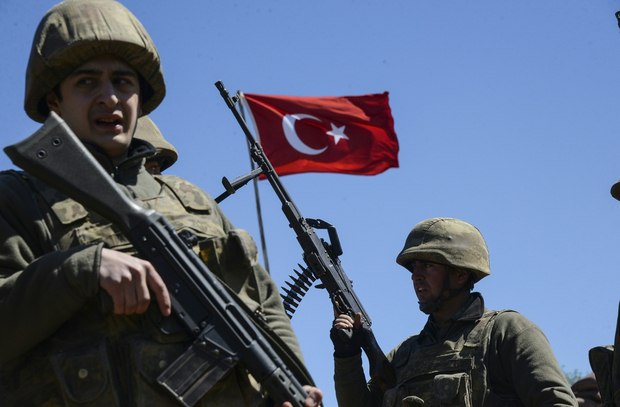 Reduction of Ankara’s Forces in Idlib ?

Turkish army soldiers stand guard as Kurdish people wait in a hope to enter Cizre, a town subject to a curfew as part of a controversial operation against Kurdish rebels, on March 22, 2016 in Mardin, for Newroz celebration. Nowruz, the Farsi-language word for ‘New Year’, is an ancient Persian festival, celebrated on the first day of spring, March 21, in Central Asian republics, Iraq, Turkey, Afghanistan and Iran.

Russia and Turkey have discussed reducing number of Ankara’s observation points in Syria’s Idlib and will talk about the reduction of Ankara’s armed forces in the Syrian province of Idlib, as well as its possible pullout of heavy weaponry from the area, an informed source told Sputnik on Wednesday.
“Russia’s technical delegation has presented an offer to reduce a number of Turkish observation posts in the Syrian province of Idlib during the meeting held on Tuesday evening in the headquarters of the Turkish Foreign Ministry. However, no consensus has been reached on the matter,” the source said.
“During the meeting, the Turkish and Russian military delegations will discuss a mechanism to decrease a number of Ankara’s forces and the withdrawal of heavy weaponry from the area,” the source added.
On Wednesday, Russia’s and Turkey’s military delegations are meeting in the Ankara-based headquarters to talk the current situation in Idlib, according to the foreign ministry.
Source: Sputnik