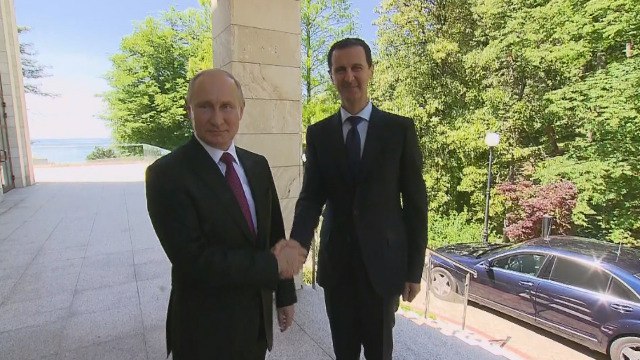 Russia’s permanent representative to the United Nations, Vasily Nebenzia, responded to U.S. President Donald Trump’s revelation about wanting to assassinate Syrian leader Bashar Al-Assad after Washington accused his government of carrying out a chemical weapons attack.
“We recently heard about plans to assassinate the president of a sovereign state, President Bashar Al-Assad,” Nebenzia said during the U.N. Security Council session on Friday. “How is this not a policy of regime change?”
Russia’s permanent representative to the United Nations stressed that “the unilateral sanctions, which are unlawful in and of themselves, which are used as a tool of collective punishment and aim to stir up social discontent impede the efforts of those who want peace in Syria.”
He called on parties that show their lack of respect for international law to abandon this practice.
Trump previously said in a televised interview with Fox News earlier that he had the opportunity to “get rid of Bashar al-Assad,” but then Defense Secretary James Mattis objected.
For its part, Damascus condemned the recent statements of U.S. President Donald Trump, stressing that Trump’s recognition of such a step confirms that the U.S. administration is a rogue and outlaw country, and is pursuing the same methods as terrorist organizations with killing and liquidation without taking into account any legal, humanitarian or ethical measures.