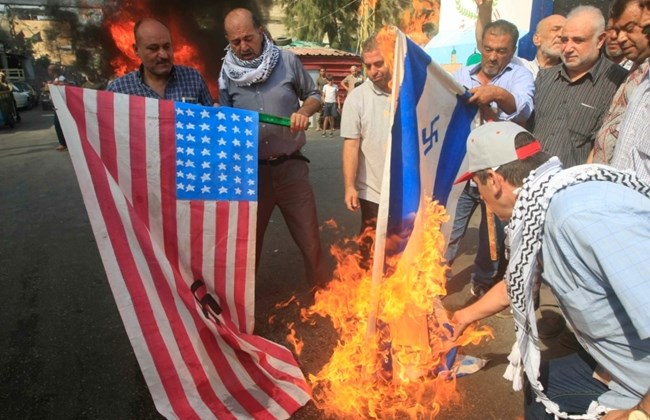 Dozens of Lebanese activists have gathered in front of the United Arab Emirates’ embassy in Beirut to protest the country’s recent signing of a normalization agreement with Israel, much to the dismay of Palestinians.

The protesters voiced their anger at the attempts by a number of Arab states to establish diplomatic relations with the Tel Aviv regime, chanting slogans against Mohammed bin Zayed Al Nahyan – the Crown Prince of Abu Dhabi and the UAE’s de facto ruler – as well as rulers Bahrain, who followed suit, the Arabic-language al-Manar television network reported on Thursday.

The demonstrators raised Palestinian flags and shouted slogans in support of the Palestinian cause, and burnt pictures of bin Zayed alongside Israeli flags.

This rally was staged in condemnation of Arabs’ surrender and frantic rush to normalize ties with the Zionist regime. Those who have scrambled for normalization will be eventually hurled into the dustbin of history,” the activists said in a final communiqué.

They added, “Palestine is an occupied Arab state, whose people are displaced and must return to their homeland.”

“This protest comes as some of the country’s and regional politicians insist on selling themselves cheaply to [US President Donald] Trump and [Israeli Prime Minister] Netanyahu. They seek to promote the false notion that there is a tolerant atmosphere for normalization inside Lebanon,” the communiqué pointed out.

Palestinians, who seek an independent state in the occupied West Bank and Gaza, with East Jerusalem as its capital view the deals as betrayal of their cause.

Palestinian President Mahmoud Abbas protested the normalization deals with Israel, saying they will be fruitless as long as the United States and the Israeli regime do not recognize the rights of the Palestinian nation and refuse to resolve the issue of Palestinian refugees.

He reiterated that there will be no peace, security or stability for anyone in the region unless the Israeli regime ended its occupation of Palestinian land, and Palestinians could restore their full rights as stipulated in international resolutions.

Meanwhile, Israeli i24NEWS television news network reported that Netanyahu and the head of Sudan’s ruling council, General Abdel Fattah al-Burhan, are set to hold a meeting in Uganda in the near future.

The network, citing unnamed Sudanese sources, added that the Sudanese-Israeli Friendship Association is also going to be officially inaugurated during a ceremony in Sudan’s capital Khartoum on September 26.

Sudan that has no formal relations with Israel has been cozying up to the regime over the past year.

In February, Burhan met with the Israeli prime minister in Uganda, sparking anger among politicians and public at home, where anti-Israel and pro-Palestine sentiments run high.

After the US announced the UAE-Israel normalization deal, Sudanese Foreign Ministry spokesperson Haidar Badawi Sadiq said in an interview with Sky News Arabic television news channel that “there is no reason for the hostility to continue between Sudan and Israel,” in comments that drew Netanyahu’s praise and raised speculation that Khartoum may be the next in line to establish ties with Tel Aviv.

The Sudanese official was, however, sacked shortly afterwards over “unauthorized” comments, with Sudanese acting minister of foreign affairs, Omer Ismail, saying that his ministry “didn’t discuss the possibility of relations with Israel in any way.”