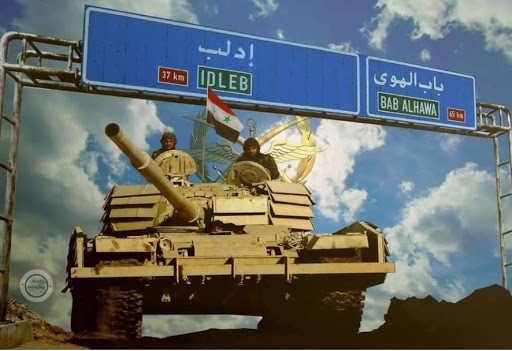 Russian and Syrian forces prepare for the liberation of Idlib

Hayat Tahir Sham (HTS), formerly known as Jibhat al Nusra, the Al Qaeda affiliate in Syria, began demanding the evacuation of civilians in Agrabat in the Idlib province recently, or they would be moved by force.  HTS is supported by President Erdogan of Turkey and has come under increased pressure to remove civilians from areas of armed conflict under an agreement between Turkey and Russia. Idlib is the last terrorist occupied area in Syria. The Syrian government has regained about 70% of the nation’s territory and has allied with the Russian military in the fight against terrorism, which is an obligation of all UN members.

The skies over northwest Syria witnessed flights by Turkish and Russian warplanes amid the almost continuous mutual bombardment of southern Idlib. Civilians have said they fear a massive military operation is coming.

Turkish F16 aircraft flew along the border strip between Syria and Turkey, while Russian reconnaissance aircraft flew over Zawiya Mountain, and the Syrian Arab Army (SAA) shelled HTS in intense strikes on areas within Zawiya Mountain in Idlib, unleashing a heavy barrage on the terrorist positions.

The heaviest fighting in six months continues to intensify in Idlib between Harras al-din (HaD) and the Turkish backed HTS, and the SAA.

Idlib is in a de-escalation zone agreed upon between Turkey and Russia in March. Erdogan of Turkey has poured thousands of troops in an invasion of Idlib, later President Putin of Russia forged an agreement to defuse a military confrontation. Turkey has more than ten thousand troops stationed in dozens of bases in Idlib province, and Russian pressure and diplomacy have sought to contain them.

The recent upsurge in fighting has seen the SAA amassing troops on the front lines in a looming confrontation, with the SAA increasing attacks on the numerous Turkish occupation outposts and the Turkish countered by sending in 15 armored vehicles over the border from Turkey.

HTS is the Al Qaeda affiliate in Idlib and is the strongest of the Radical Islamic terrorist groups who occupy Idlib. Abu Mohammed Al-Jolani is the leader of HTS, which is loathed by the civilian population because of their extremism and fascist political ideology which keeps women in subjugation and servitude.

The civilians are not the original inhabitants of Idlib, who left years ago, but the thousands of militants and their families who left on the green buses from various areas around Syria under a voluntary relocation program.

Ansar Abu Bakr Brigade is a hardcore terrorist group that is opposed to Turkey, HTS, Russia, and SAA. They have warned of more attacks on Turkish soldiers stationed in Idlib province after they claimed an attack on a Turkish military base in western Idlib province last week, close to the M4 highway.

Hurras al-Din (HaD) is a hardcore Al-Qaeda group that broke away from HTS, and the Ansar Abu Bakr Brigade is formed from them, while all have a history of ideological and leadership ties to Al-Qaeda, and view Al-Qaeda leader Ayman al-Zawahiri as their “defining authority”. Almost all of the members are non-Syrian foreign terrorists who were initially brought to Idlib by the CIA program supported by Turkey which President Trump disavowed in 2017.

Russia and Turkey entered an agreement in September 2018 to demilitarize the Idlib province. On March 3 Turkey and Russia agreed on a ceasefire to establish security for the M4 highway connecting the Port of Latakia to the industrial city of Aleppo, with joint patrols to begin on March 15.

Turkish and Russian soldiers were trained to communicate in case of emergencies; however, the terrorists have launched attacks on both Turkish and Russian patrols at various times, which resulted in a break-down in the patrols due to security concerns. Russia has recently stepped up its attacks on the headquarters of HTS, HaD, and Ansar Abu Bakr Brigade.

Turkey has failed to implement its obligations under the agreements with Russia in Idlib, which was to separate the terrorists from the civilians. Turkey wants to maintain the chaos in Idlib, including the Al Qaeda linked groups who Turkey supports as their foot-soldiers in Syria.

Turkish and Russian troops have come under attack from terrorist groups on the M4 highway, with roadside bombs and rockets frequently targeting the patrols which stopped at the end of March but resumed on July 22.

On August 18 the joint patrol was attacked, and again on August 25 when a Russian convoy was damaged and left two Russian servicemen injured.

Chemical attack in the planning stages

On February 1 about 15 ‘White Helmets’ members arrived and began working on a planned chemical attack, according to two residents who warned authorities of the plot in the border city of Sarmada, north of Idlib, after terrorists and a convoy of three trucks loaded with different chemical containers arrived.

“The provocation involving a crowd of about 200 people is planned to be staged in the settlement of Maaret al-Artik. These people, including children, are mostly family members of militants who were previously evacuated from southern governorates and have arrived in the Idlib de-escalation zone. About 400 liters of a chemical solution has been delivered by White Helmets activists in two pickup cars to the location from an underground storage facility,” the Russian Center for Reconciliation of the Opposing Parties said.

According to the Russian center, the group was led by HTS terrorist Mahi al-Din al-Am, who took part in filming the fake chemical attack in Idlib’s Khan Shaykhoun on April 4, 2017.

The video of the staged chemical attack would be posted on ‘White Helmets’ accounts in social networks and would be picked up by Western and Arab media.

The Russian center has called on Turkey to exert pressure to prevent the use of poisonous agents in Idlib; however, HTS is supported by Turkey, and the movement of the chemicals was facilitated by Turkish intelligence agents.

“The Russian Center for the Reconciliation of Opposing Sides received information about the preparation of a provocation using poisonous substances in the southern part of the Idlib de-escalation zone by the terrorist group Hayat Tahrir al-Sham,” Russian Admiral Alexander Grinkevich recently said, to accuse the Syrian government forces of using chemical weapons against civilians.

HTS terrorists have two tons of toxic agents warehoused in a civilian inhabited area in Southwest Idlib according to local sources, who believes is the reason for the recent demands by HTS for civilians to leave the area, or be forced to leave.

Syria surrendered its stockpile of chemical weapons in 2014 to a joint mission led by the United States and the OPCW, which oversaw the destruction of the weaponry. However, on April 14, 2018, the US, Britain, and France carried out a string of airstrikes against Syria over a suspected chemical weapons attack on the city of Douma. Trump and his allies blamed Damascus for the Douma attack, even though Trump’s Secretary of Defense James Mattis stated that the US has no evidence that Syria has used chemicals on civilians.

Turkey has been accused of using Syrian refugees and displaced persons to leverage EU support for its invasion and military action in Idlib.

“Refugees are not a bargaining chip to be played with at the whims of political leaders. Europeans cannot look away from what might become one of the worst humanitarian disasters the war in Syria has brought on its people. Respecting international humanitarian law as well as the human right to protection and refuge remains the sole possible answer in front of such indiscriminate violence,” said Wadih Al-Asmar, President of EuroMed Rights.

European leaders have been threatened by Erdogan that he may unleash a huge wave of refugees towards Europe if he is not allowed to remain in Syria.

A Military Bus Explodes in Damascus