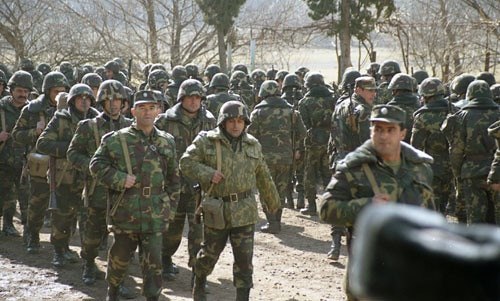 Azerbaijan has declared partial mobilization of reserve servicemen amid the escalation of tensions with Armenia in the disputed Nagorno-Karabakh region, the presidential press service told Sputnik on Monday.
“Azerbaijani President [Ilham Aliyev] has signed a decree about partial mobilization in Azerbaijan,” the press service said.
The order comes into force on the day of its signing.
Meanwhile, Armenian forces announced that they restored a number of previously lost positions.
“At night, intensive fighting continued in the southern, southeastern, and northern directions of the front line. As a result of a counterattack, troops from the [Nagorno-Karabakh] Defense Army inflicted heavy losses on enemy personnel and military equipment.
According to the Armenian Defence Ministry, Baku used BM-30 Smerch heavy rocket launchers against Nagorno-Karabakh.
A photo and a video, allegedly depicting shrapnel from a rocket has been shared by users on social media.
Source: Sputnik