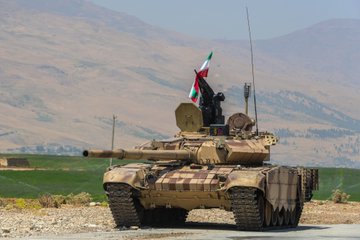 The U.S. Army tested a LIDAR robot during training in Yuma, Arizona, and the target was a Russian T-72 tank, according to the Breaking Defense online publication.
These small-drone-equipped robots identified a T-72 tank using the Aided Target Recognition (ATR) algorithm, based on more than 3.5 million images of the tank.
“Then the robot’s onboard Aided Target Recognition (ATR) algorithms identified another enemy, a T-72 tank. But this target was too far away for the robot’s built-in weapons to reach. So the bot uploaded the targeting data to the tactical network and – again, with human approval – called in artillery support,” Breaking Defense said.
Artificial intelligence uploaded target data, since its built-in weapon range was not sufficient to hit the tank, it called for the use of artillery with the operator’s consent.
Breaking Defense earlier said that the U.S. military has reduced the time of deployment of artillery systems to 20 seconds because of concerns over Russia and China.