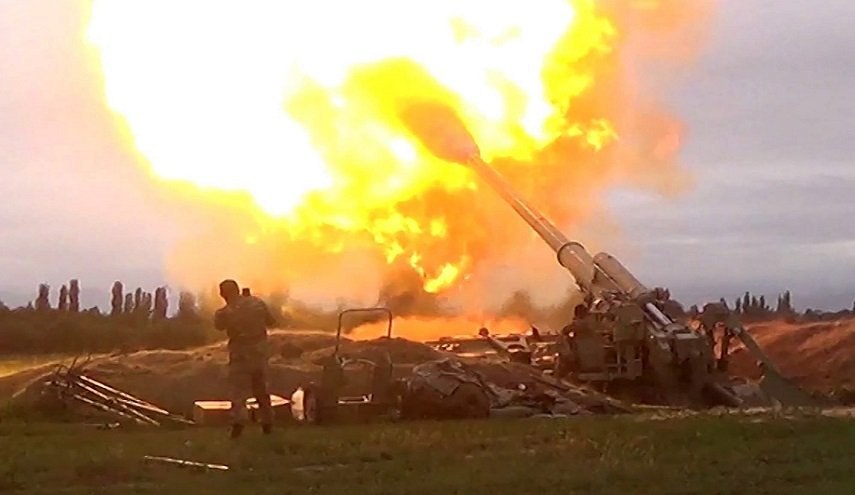 The Turkish army forces deliberately targeted with artillery the Syrian army points in Saraqib, Idlib eastern countryside, continuing its transgressions and failure to abide by the ceasefire concluded previously.
Being targeted by the Turkish artillery stationed in ” Al-Mastouma “area, the Syrian army responded with missiles towards the source of fire.
There were no Syrian army’s casualties, the sources emphasized, due to this targeting which is not the first of its kind, as such attacks were several lately on different civilian areas in the countryside of Aleppo and Hama as well.
The Turkish attacks on the Syrian lands coincide with the continuation of mobilizing military forces by Turkey and Turkish-backed armed groups on the battle fronts in the countryside of Idlib. As sources revealed that “a major move by Hamzat Division was monitored on Sunday, with fighters and heavy military vehicles deployed in Jabal Al-Zawiya area, Idlib southern countryside, coming from Aleppo northern countryside.
These movements come days after the entry of 13 Turkish military columns into the Syrian territories through “Kafrlossin” crossing for two consecutive days. These columns of armored vehicles, tanks and trucks loaded with ammunition were deployed within the illegal Turkish military points and bases in Jabal Al-Zawiya area as well.‌‌

Aleppo Idlib Syria Syrian_Army Turkey Turkish_army
Previous Article“Israel’s presence near the Iranian border would also put them in direct confrontation with Iran.” Dr. Javad Heirannia explains
Next Article Will America turn their back on Armenians again?