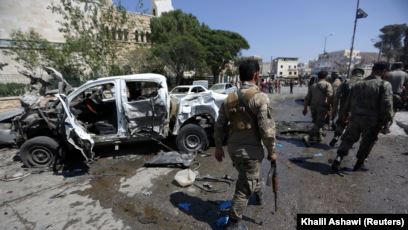 The number of killed militants from the Syrian factions present in Azerbaijan, who are fighting in the Karabakh region against the Armenian forces, has raised.

Sources stated that 27 Syrian militants sent by Turkey to Azerbaijan were recently killed, totalling more than 160 killed. Some of thier bodies were transferred secretly to Syria, while others are still in Azerbaijan.

Despite the increased number of Syrian militants killed in Azerbaijan, the camps on the Syrian-Turkish borders continue to recruit more fighters in order to involve them in the Azerbaijani-Armenian conflict, noting that the new batch that Turkey is preparing has about / 1200 / armed men, / 400 / of them were given orders to prepare to travel at any moment.

The fighters of the Syrian armed factions in Azerbaijan have increased tension due to Turkey’s pressure on them, preventing them from communicating with their families and putting them in the dangerous front lines without serious support from the Azerbaijani forces, which made some militants flee while others refused to fight.‌‌