The Syrian army kills 13 ISIS militants in the Syrian desert 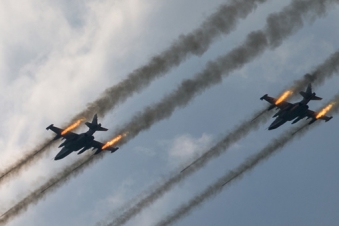 The battles between the Syrian army and  “ISIS”  cells in the Syrian desert continue for the second day in a row, in sporadic clashes that take place occasionally on the axes of “Al-Rahjan” and “Athria”, Hama eastern countryside, in addition to the axes of the Aleppo-Hama-Raqqa triangle from Badia side.

Violent clashes broke out on Tuesday in the aforementioned axes and the Syrian army confronted ISIS attacks, which did not result in any progress for them rather resulted in deaths and injuries within their ranks.

More than / 13 / militants from the terrorist organization “ISIS” were killed by the Syrian army’s fire during the ongoing clashes, in addition to wounding / 20 / others, and destroying a number of military vehicles that the militants used in their attack.

The ongoing battles are in the form of successive attacks and infiltration attempts by ISIS militants towards the Syrian army points, and coincide with  Syrian and Russian areal attacks on the sites and gatherings of ISIS cells.”

ISIS made no progress on any of the Syrian Badia axes and all the attacks were confronted, coinciding with the increase in readiness state of the Syrian army in its military points spread in Hama countryside, where the most number of attacks take place.‌‌