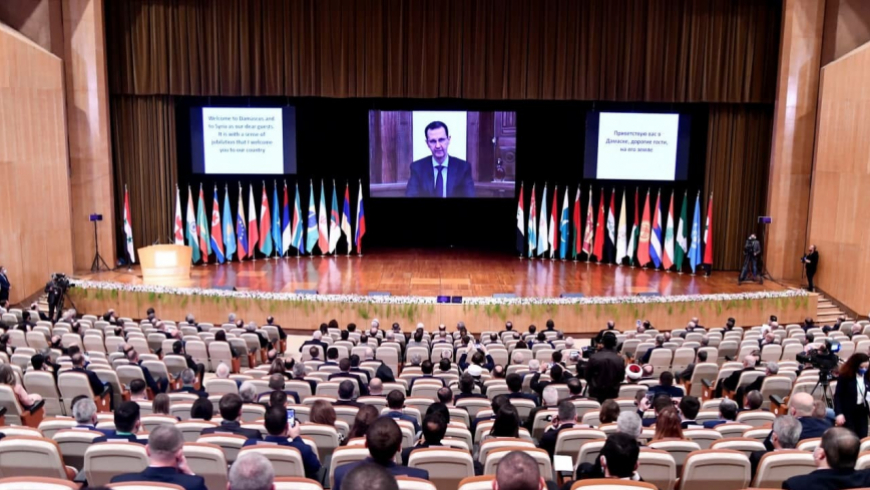 The first International Conference on the return of Syrian refugees was held on Wednesday and Thursday at the Damascus Umayyad Palace conference center. 27 countries were in attendance, including Russia, Iran, China, Lebanon, Iraq, United Arab Emirates, Venezuela, Oman, and Pakistan. The UN attended as an observer, and 12 international organizations were represented including the Red Cross.

Turkey and Jordan were not present, though both countries host thousands of refugees. Turkey was not invited, as it is a military occupier in Syria, and Jordan declined to attend, bowing to US pressure.

Bilateral meetings between representatives of foreign countries and international organizations were held, focused on the return of refugees, as well as measures dealing with COVID-19. The conference began on Wednesday with an opening session and three plenary sessions in addition to several roundtable meetings, during which the conditions of the Syrian refugees, the obstacles facing their return, and the current situation in Syria were discussed, along with humanitarian aid, and cooperation between scientific and educational organizations.

At least 5.6 million Syrians left their country and are living in countries such as Turkey, Lebanon, Jordan, Iraq, and Germany. Turkey hosts the largest number of refugees in the world, with 3.6 million Syrians.

Lebanon’s outgoing Foreign Minister Charbel Wehbi addressed the gathering by video conference and used the opportunity to call on the international community to help in the return of Syrian refugees. Lebanon sent a delegation to attend the conference headed by the minister of social affairs.

“In light of the current blockade, the agenda of the conference is modest and the number of participating countries is also modest, but it is the first step in preparation for conferences that may come in the next stage, ” said Syrian parliament member Ahmed Marei. “The countries that received a large number of refugees are not present, and this is understandable as a result of the sanctions, and their political stance, and the boycott of major countries like the US, but we can say that we are on the right way and it is a step in the right direction.”

The Iranian delegation, led by Ali Asghar Khaji, proposed the creation of an International Fund for the reconstruction of Syria while reiterating Iran’s stance that focuses on reaching a political solution for the Syrian crisis and supporting its people.

Some participants visited the Harjalleh temporary housing center for the displaced in Damascus countryside, where they interacted with Syrians who had left their homes due to the war.

The final session on Thursday concluded with a joint statement by conference participants.

The message from President Bashar al-Assad

Syria President Bashar al-Assad opened the conference via video link. After thanking his Russian, Iranian and Chinese allies, he explained that citizens who left the country did not flee from the authorities, but did so to shield their families from foreign assailants. He warned the challenge that remains is immense since part of the country is still occupied and another largely destroyed. Despite the adversity, the government managed to restore a minimum of infrastructure, lines of communication, and public services.

Assad said the European and US sanctions on his government, imposed over the war hinder rebuilding efforts and improvement of infrastructure that was damaged by the war and doesn’t aid in the return of refugees.

“We are working hard for the return of every refugee who wants to come back and help rebuild the country,” Assad said, while adding, there “are major obstacles — including pressures exerted on refugees not to return and the illegitimate economic sanctions and the siege imposed by the American regime and its allies.”

“Millions of Syrians want to return,” Assad said. But a huge amount of “infrastructure has been destroyed after being built over decades, and terrorism continues in some areas,” he said, referring to the Al Qaeda occupation by Hayat Tahrir al-Sham in Idlib, and the terrorist mercenaries employed by Turkey in the northeast.

Assad said Western sanctions targeting the Syrian people were also “depriving the country of the simplest means for reconstruction”.

During a video call with Assad on Monday, Russian President Vladimir Putin praised the conference saying that “international terrorism has been almost wiped out and return to civilian life should begin gradually,” in Syria.

Why did Syrians leave their country?

Syrian investigative journalist Rafik Lotf, said in an interview on the sidelines of the conference, that Syria is not only leadership and an army, but as well as there are major humanitarian issues, and Arab countries must stand by the Syrian people because they are the ones who pay the price of the sanctions and the suffocating siege which are imposed by the US administration and its allies.

The US-NATO attack on Syria used the Muslim Brotherhood political ideology, which follows Radical Islam, to promote Syrians to kill their neighbors and take up arms against the government. Some of the refugees left because they were following the Muslim Brotherhood Islamo-fascist dogma, and they may be in Turkey, Canada, or Germany awaiting their chance to reform the community there through the barrel of a gun, or the sharp end of a knife.

The French government is now waging a domestic war against Radical Islam in the wake of several recent terrorist attacks.

Recent research shows that most Syrian refugees want to go back home, but some have adapted to life abroad, have found a job, and made a new life. Many have reaped the benefits of their time in Germany, with free housing, food, clothing, and are determined to keep using the welfare system instead of having to work hard to rebuild their life in Syria once again. This is proven by the hundreds of Syrian refugees who have visited Syria, and returned to Germany and elsewhere for their benefits. This situation has caused the German government to ban ‘refugee vacations’, while German officials questioned how could Syria be un-safe if refugees keep going home for visits.

US and EU refuse to help refugees to return to Syria

Russia’s special envoy Alexander Lavrentiev addressed the opening session, and read a speech from Russian Foreign Minister Sergey Lavrov, who described the US-EU sanctions as “financial strangulation” used to prevent the arrival of foreign aid and put up obstacles to prevent the return of the displaced to areas under government control. He said that some states continue to support terrorist organizations and politicize the case of Syrian refugees, holding those states responsible for the suffering of millions.

The European Union said on Tuesday it would not attend, as the situation in Syria was not yet safe for returns.

“We reiterate therefore our urgent call on the regime and its sponsors to engage fully and in good faith in the work of the Constitutional Committee, as well as in all other issues mentioned in UNSC Resolution 2254,” said the EU statement.

The Syrian government has sent a delegation to every UN meeting concerning Syria, has participated in the Constitutional Committee, has received every UN official calling on Damascus, and is making progress on fulfilling the UN resolution 2254 which seeks to establish a political solution to the Syrian conflict. The US and EU have conditioned their help for the Syrian people on a political settlement to the conflict while refusing to acknowledge the progress Syria is making towards a resolution.

The Syrian Opposition Coalition criticized the conference, saying the return of refugees can happen only after the bombing of ‘rebel-held’ areas stop and a political transition is achieved. The main opposition is supported by the US and EU, while refusing to acknowledge that Idlib is occupied by the Al Qaeda affiliate in Syria, are terrorists, and are holding 3 million civilians as human shields to prevent the defeat of terrorism.

“It is the strong belief of the US that this conference is counter-productive and it is totally inappropriate for any military organization to manage refugee returns in Syria, Russia or otherwise,” said Richard Mills, Washington’s deputy ambassador to the UN, during an online meeting of the UN Security Council last month.

“The US will not attend the conference. We strongly urge the UN and all others to forgo attendance as well at this conference that has been orchestrated by those responsible for the refugees fleeing in the first place,” Mills said, before the conference.

Clare Daly, a Member of the European Parliament from Ireland for the Dublin constituency, has accused the EU of paying Turkey to prevent Syrians from reaching Europe, rather than working with Syria to restore favorable conditions for them to return.

Daly feels Syria is trapped in an international situation, not of its making, and the EU does not want to abandon regime change, even though now it is unrealistic, and this means EU sanctions remain in place, preventing Syria from rebuilding and addressing the needs of its people.

Daly sees Turkey using Syrian refugees displaced by the conflict as a bargaining chip in its relations with the EU, which perceives them as an unwanted migration problem.

What is needed for refugees to come home?

The conference was a call on the international community to lift sanctions that prevent the rebuilding of homes, lives, and incomes for all Syrian who wish to return home and build their country towards peace and prosperity.