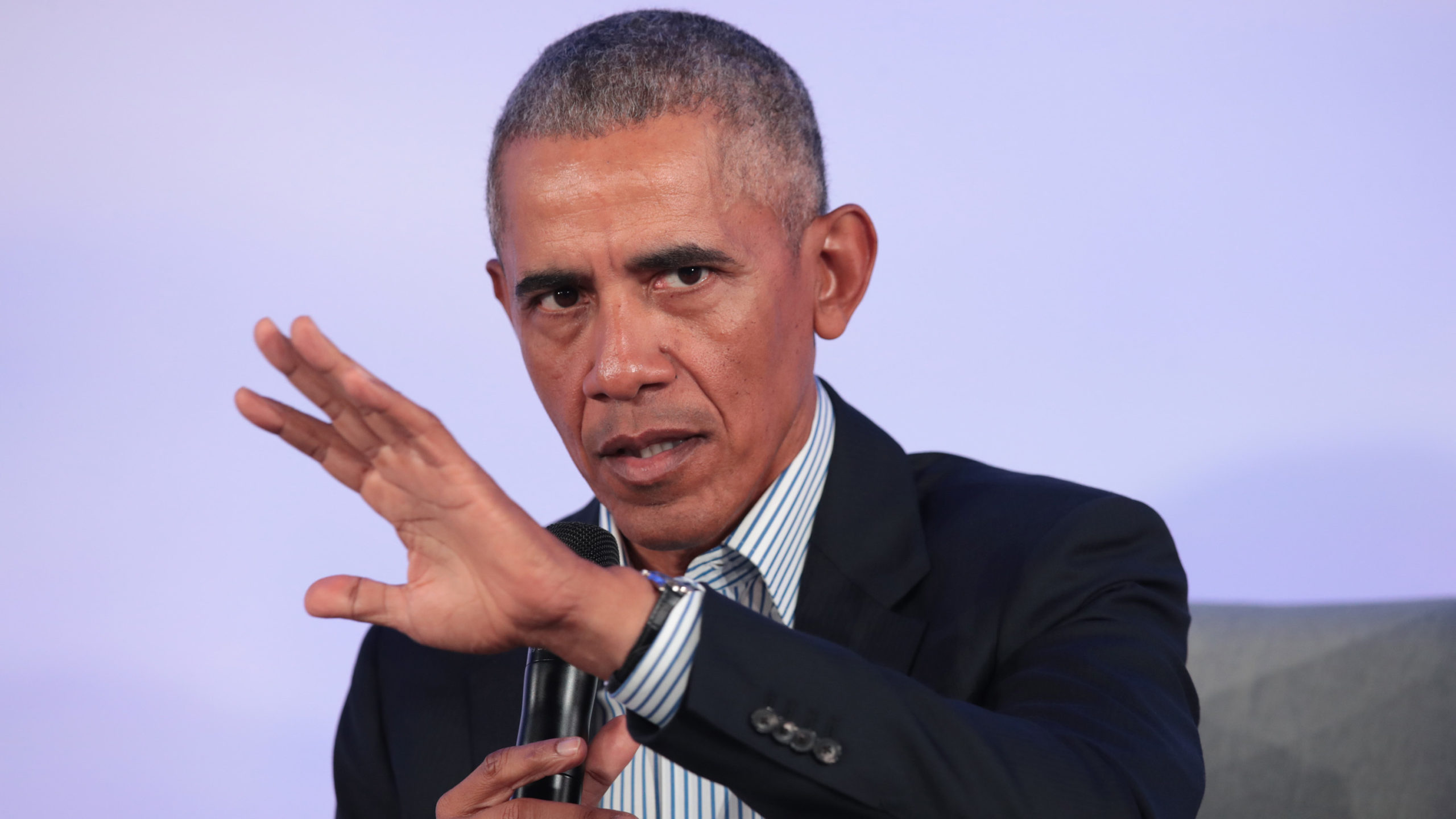 Former US President Barack Obama has admitted in an interview with German channel NTV on Wednesday, November 18, that his administration failed to deal with Syria during his presidency.

He was asked about the failures in his administration, and he answered, “In the area of foreign policy, the tragedy in Syria is still bothering me. During the Arab Spring, Egypt was in the spotlight, and later Libya, but at the same time, Syria was beginning to fall apart. In any case, I was not in a position to win the international community over to hold Syria together. I can’t stop thinking about the human suffering that followed.”

Obama acknowledged that his legacy has been negatively affected by his refusal to invade Syria with a US occupation force.  However, his successor, President Donald J. Trump has invaded Syria, and the US military is occupying Syria and stealing the oil resources, in a scene reminiscent of Dick Cheney and George W. Bush administration’s history in Iraq.

Seymour M. Hersh wrote in April 2014, “The Red Line and the Rat Line”, concerning Obama, Turkey, and the US-backed terrorists.

In August 2013, after the sarin attack in the Damascus suburb of Ghouta, Obama was ready to launch an airstrike on Syria, for allegedly crossing the ‘red line’ he had set in 2012 on the use of chemical weapons.

Obama changed his mind because of research conducted at Porton Down, the UK defense laboratory. British intelligence had obtained a sample of the sarin used in the attack and analysis demonstrated that the gas didn’t match the Syrian army’s chemical weapons arsenal.

A former senior US intelligence official told Hersh that Prime Minister Recep Erdogan of Turkey had operatives who believed they could force Obama to attack the Syrian government by staging a sarin attack inside Syria.

Erdogan was supporting Jibhat al-Nusra, the Al Qaeda affiliate in Syria, as well as other foreign Radical Islamic terrorist groups. Hersh was assured by a former senior US intelligence official that, ‘Turkey and Saudi-based chemical facilitators were attempting to obtain sarin precursors in bulk, tens of kilograms, likely for the anticipated large scale production effort in Syria.’

The US joint chiefs also knew that the media claims that only the Syrian army had access to sarin were wrong. The US and UK intelligence communities had been aware since the spring of 2013 that some terrorist units in Syria were developing chemical weapons. The US Defense Intelligence Agency (DIA) issued a highly classified report which stated that Jibhat al-Nusra maintained a sarin production cell, and was ‘the most advanced sarin plot since al-Qaida’s pre-9/11 effort’.

Jibhat al-Nusra changed their name to Hayat Tahrir al-Sham to circumvent the US restrictions on support of Al Qaeda terrorist groups, and are today holding the 3 million civilians in Idlib as hostages and human shields. The US-NATO-EU continue to demand protection for the terrorists, by insisting on a ceasefire which seeks to prevent Russian and Syrian military attacks on the terrorists, which contravenes the UN-mandated global war on terror.

A series of chemical weapon attacks in March and April 2013 was investigated by a special UN mission to Syria, there was evidence linking the terrorists to the first gas attack, on March 19, 2013, at Khan Al-Assal. Investigators interviewed the victims and their doctors, and it was clear that the terrorists used the gas.

The Obama target list to attack Syria in 2013 included all the electric grids, oil and gas depots, all weapons depots, and all military buildings. But, Obama put the brakes on the plan after the UK defense findings were sent to the US joint chiefs, effectively telling them they were being set-up by the terrorists.

The US military had already questioned who would benefit from the use of sarin gas attack, and they concluded that from a military standpoint, Syria would not use nerve gas at that stage, because Assad was winning the war against the terrorists.

David H. Petraeus, who was then CIA director, first proposed a covert program of arming and training terrorists in the summer of 2012. Obama signed a presidential order authorizing the CIA to secretly arm and train terrorists at bases in Jordan in 2013. Obama’s decision came after intense lobbying by US allies, King Abdullah II of Jordan and Prime Minister Benjamin Netanyahu of Israel, who were united in their support of using the Muslim Brotherhood ideology to topple the Assad government.

“The Dark Side of the Free Syrian Army” was published in December 2012, and exposed the US government’s support of the Free Syrian Army (FSA), which was being armed by financial and military assistance from NATO, EU, and Arab Gulf nations allied with the US.  The FSA was being used as the boots on the ground for the US and their allies, for regime change.

Western media had portrayed the FSA as ‘the good guys’ and was not reporting details of human rights violations, attacks on civilians, rapes, kidnappings, and torture. Western media was turning a blind eye to the facts, and painting the battle as between a dictator, and the FSA, which was labeled freedom-fighters.

Of the 23 million citizens in Syria, about eight million are minorities such as Christians, Druze, Alawites, and Kurds, who are protected by the government, and the majority of the Syrian people support President Assad. The facts on the ground, were of an armed terrorist group, following Radical Islam, with the intent of establishing an Islamic government in Syria, while being supported by democratic western government, fighting against the majority of the Syrian people and their legitimate government. The FSA acted as a force opposed to the citizens of Syria, and never intended democracy to be the outcome.

The FSA had instituted Sharia law in a secular country that has never known Sharia Law, and the FSA targeted the infrastructure of the country, as they destroyed power plants, water systems, schools, hospitals, and factories.

The Obama sanctioned war crimes in a Syrian Christian village

‘Timber Sycamore’, the secret CIA program to support the terrorists in Syria was focused on pushing into areas of which were considered to be government strongholds, such as the northern coastal strip. On the morning of March 21, 2014, the US-supported terrorists, along with international terrorist partners, attacked the village of Kassab, which is an Armenian Christian village on the Turkish border. They attacked from the Turkish side, with the help of the Turkish military who used helicopters and canons to break down the defenses.

The US-backed FSA caused the entire village to flee for their lives, as people were shot, homes were ransacked and looted, women raped, and elderly immobile residents kidnapped to Turkey.

On April 11, the Syrian opposition leader, Ahmad Jarba, visited his troops at Kassab, and congratulated them on their victory, and predicted the Syrian government would soon fall.  The village would remain occupied for three months, during which time all three churches were burned, religious icons and books destroyed, the graveyard dug up and bones desecrated, and virtually every home, farm, and business destroyed.

Just weeks later in May, President Obama, and Susan Rice met with Ahmad Jarba in the Oval Office and praised the Syrian National Coalition’s role in trying to find a political solution to the crisis in Syria.

The US officially recognized the Syrian National Coalition as the sole representative of the Syrian people, with Ahmad Jarba as its president, and boosted financial assistance to the group.

“President Obama welcomed the coalition’s leadership and constructive approach to dialogue, and encouraged the coalition to further its vision for an inclusive government that represents all of the people of Syria,” the White House said. The statement should have added that only those following the Muslim Brotherhood would be part of the ‘inclusive government’, and Christians need not apply.

The US ties with Radical Islamic groups were cemented in the 1980s when the Reagan administration used Islam as an ideological tool to use jihad against the Soviet intervention in Afghanistan.

Using Radical Islam for geopolitical aims has come to diminish global security, including the rise of the jihadists, or “holy warriors,” and as a result, the US still props up the Wahhabist monarchs in Saudi Arabia, while secular Arab states, such as Syria, Libya, and Iraq have fallen victim to the US sponsored regime change and sanctions.

In 2011, Brahma Chellany wrote in ‘The Japan Times’, recalling President Ronald Reagan in 1985 introducing the Afghan mujahedeen leaders at the White House as, “These gentlemen are the moral equivalent of America’s Founding Fathers.”  Osama bin Laden was later to be found not so moral as Regan espoused.

In 2011, US Senator John McCain had announced after meeting Libyan jihadists that they are “willing to reimburse us and our allies” for the costs of effecting the regime change. By May of 2013, McCain was crossing illegally into Idlib, Syria to meet with his ‘freedom-fighters’ the FSA, but was caught in a photo-op with Mohammad Nour, who was identified as a known international kidnapper.

McCain had denounced Obama’s decision not to put boots on the ground, while aware of the US support for the Radical Islamic terrorists, pretending to be freedom-loving heroes.

Trump cut-off the Obama funding to terrorists in Syria

In 2017, President Trump cut funding for the $1 billion CIA support of the terrorists in Syria. It was well known that the FSA had been selling and giving their US supplies weapons to Jibhat al-Nusra, the Al Qaeda affiliate in Syria, and ISIS.

The US liked to support Jibhat al-Nusra, despite being Al Qaeda, because they were fierce fighters. The US had used the rationale that the group was focused on battles in Syria, and not on plotting terrorist attacks against the US and Europe. However, the French government recently stated they are at war against Radical Islam, and some of the attacks which occurred on French soil have connections to training in Syria. The US, UK, France, and Germany continued to feed a monster of their creation and now will continue to pay the price with the blood of their citizens.