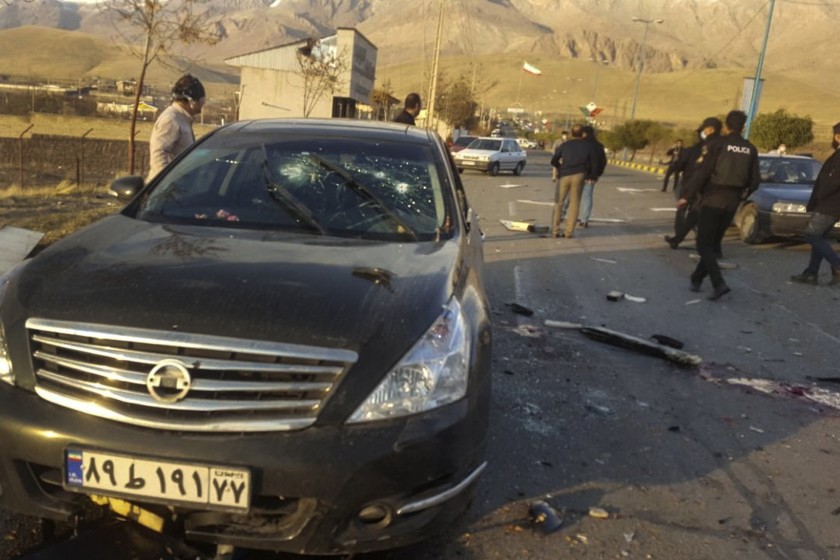 Mohsen Fakhrizadeh, 59, was assassinated on Friday in a sophisticated ambush on his vehicle, in the Iranian city of Absard, near Tehran. The nuclear scientist headed the Research and Technological Renewal Department in the Ministry of Defense.

Senior Iranian officials, including Foreign Minister Javad Zarif, said that Israel was likely behind the attack, and wrote on Twitter on Friday, “Terrorists murdered an eminent Iranian scientist today. This cowardice – with serious indications of Israeli role – shows desperate warmongering of perpetrators.”

Iran’s supreme leader Ayatollah Ali Khamenei on Saturday called for “following up on this crime and certainly punishing the perpetrators and those responsible, and … continuing the scientific and technical efforts of this martyr in all of the fields he was working in.”  He added that Iran’s first priority after the killing was the ‘definitive punishment of the perpetrators and those who ordered it.’

Iran’s President Hassan Rouhani had said on TV, “The nation of Iran is smarter than to fall in the trap of the conspiracy set by the Zionists. They are thinking of creating chaos, but they should know that we have read their hands and they will not succeed.” He vowed that Iran will not “leave this criminal act unanswered” and will retaliate “in due time.”

Who is to blame?

The world should thank Israel for killing the father of Iran’s nuclear weapons program, a senior Israeli official told the New York Times after the assassination of Fakhrizadeh, and the media reported that an American official and two other intelligence officials confirmed Israel was behind the attack, without giving further details.

Israeli Prime Minister Benjamin Netanyahu named Fakhrizadeh as boss of the nuclear program during a news conference in 2018 when he showed the world the Iranian nuclear archive that the Mossad managed to steal.

Bruce Riedel, a former CIA official, called the alleged Israeli operation “unprecedented” and added Israel had invested considerable resources of its spy agencies mostly on Iran and had established human assets networks inside Iran and bases of operations in neighboring countries, such as Azerbaijan. Riedel warned other actions might be in the works.

In the news industry, assassination is defined as “the murder of a politically important or prominent individual by surprise attack.”

The current version of the US executive order states: “No person employed by or acting on behalf of the United States Government shall engage in, or conspire to engage in, assassination.”

Assassinations are prohibited by the law of armed conflict dating from The Hague Conventions of 1907, and by the Geneva Convention in 1949.

In November, President Trump was talked out of launching strikes on Iran. The New York Times reported that Defense sources said that Trump asked for options on a bombardment likely to have targeted Iran’s foremost nuclear facility, Natanz.

Analysts wonder if Trump, along with his Israeli and Saudi allies, might try to provoke Iran into open conflict in the last days of his presidency.

Speculation swirled that Trump might soon initiate some kind of attack on Iran, in light of the recent unprecedented meeting in Saudi Arabia between Israel’s prime minister, Benjamin Netanyahu, US secretary of state, Mike Pompeo, and the Saudi crown prince, Mohammed bin Salman (MBS).

“This administration… is here until January 20” and will “continue to pursue its policies,” a senior US official traveling with Pompeo said during a stop in Abu Dhabi.

Trump’s “maximum pressure” sanctions campaign hurt the Iranian people but left their leaders unbowed. Iran is accelerating its nuclear capabilities since Trump reneged on the nuclear deal.  After four years of failure, he may want to go out with a bang.

UN Secretary-General António Guterres and UN spokesman Farhan Haq said, “We call for restraint and see it as necessary to avoid measures that could lead to an escalation of tensions in the region.”

Iran’s UN Ambassador Majid Takht Ravanchi wrote in a letter to Guterres, “’Warning against any adventuristic measures by the United States and Israel against my country, particularly during the remaining period of the current administration of the United States in office, the Islamic Republic of Iran reserves its rights to take all necessary measures to defend its people and secure its interests. It is an obvious example of state terrorism, and, as a criminal act, constitutes a gross violation of the fundamental principles of international law.”

British Foreign Minister Dominic Raab said on Sunday, “We are concerned about the situation in Iran and the wider region we do want to see a de-escalation of tensions. We’re still waiting to see the full facts to address the full facts of what’s happened in Iran but I would say that we stick to the rule of international humanitarian law which is very clear against targeting civilians.”

The European Union condemned the alleged targeted killing of Fakhrizadeh and posted an official statement on the bloc’s foreign affairs website. “The High Representative expresses his condolences to the family members of the individuals who were killed while wishing a prompt recovery to any other individuals who may have been injured,” the statement read.

The German Foreign Ministry said, “We call on all parties to avoid taking any action which could lead to a new escalation of the situation” which “we absolutely do not need at this moment.” The ministry has stressed the importance of preserving communication channels with Iran before the transition in Washington to resolve the Iranian nuclear program issue via diplomacy.

The Turkish Foreign Ministry said, “We regret the death of Mohsen Fakhrizadeh following an armed attack. We condemn this heinous murder and offer our condolences to the Iranian government and the dead man’s relatives. Turkey is against all initiatives aimed at disrupting peace in the region and against all forms of terrorism, no matter who their perpetrator or target is.”

John Brennan, former CIA director from 2013-2017, denounced the assassination of Fakhrizadeh, describing it as “highly reckless” and a “criminal act” in a series of tweets. Brennan insisted that “such an act state-sponsored terrorism would be a flagrant violation of international law & encourage more governments to carry out lethal attacks against foreign officials.”

Previous assassinations by Israel and the US

July 23, 2011: A physics professor involved in the Iranian nuclear program is killed by gunmen on motorcycles in Tehran.

January 11, 2012: A chemistry expert who also served as deputy director of the Natanz enrichment facility was killed in an explosion in Tehran.

Several attacks on infrastructure linked to Iran’s weapons program have also been linked to Israel, and the US and Israel are believed to have launched repeated sabotage attacks inside Iran during Trump’s tenure.

The US has never declared war on Iran; therefore, the targeted killing of a high Iranian state and military official by a surprise attack was “clearly an assassination,” said Mary Ellen O’Connell, an expert in international law and the laws of war at the University of Notre Dame School of Law. “Assassination is prohibited both in peacetime law as well as on the battlefield,” she said. “We have really moved to a nearly lawless state,” she said.

Israel has alleged Iran has a military operation looking at the feasibility of building a nuclear weapon; however, Tehran long has maintained its nuclear program is for peaceful purposes, and that nuclear bombs are against Islam and the core values of the nation.

Ben Rhodes, a former advisor to Obama, commented, “This is an outrageous action aimed at undermining diplomacy between an incoming US administration and Iran.” He added: “It’s time for this ceaseless escalation to stop.”

US President-elect Joe Biden wants to resume dialogue with the Islamic Republic, but Trump’s parting actions may blow up the chance for regional peace under the future administration.