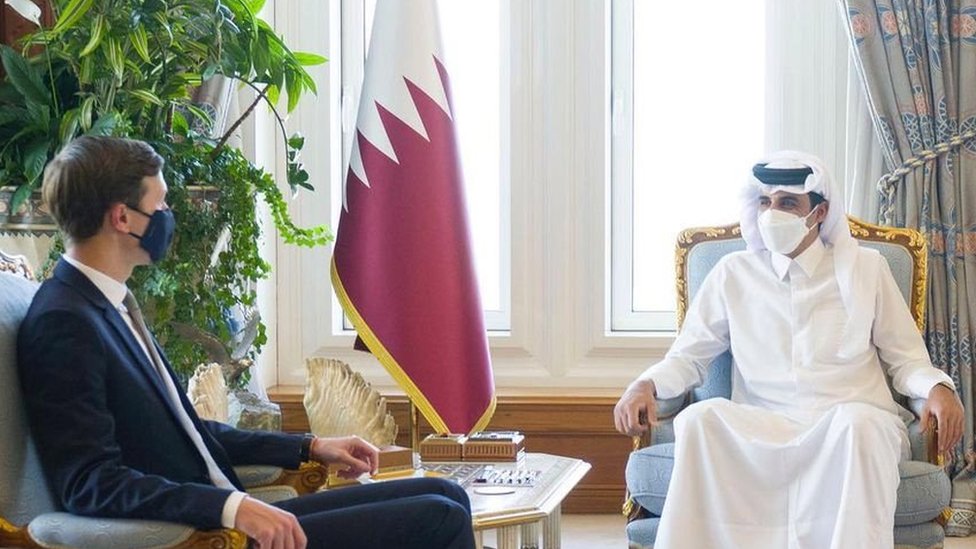 President Trump supported the blockade, tweeting on June 6: “During my recent trip to the Middle East, I stated that there can no longer be funding of Radical Ideology. Leaders pointed to Qatar…”

On December 2, Doha News reported that a breakthrough was impending and that it was “understood that Saudi Arabia will open its air space for Qatar Airways flights, and there are some reports that Riyadh may even open its land border.”

Qatar was able to use its deep financial reserves to keep the economy moving, and with orders of foods and other necessities from Iran, was able to manage the blockade for three years since Gulf Cooperation Council (GCC) crisis. Qatar has also strengthened its ties with Turkey, increasing trade and air traffic.

Qatar’s Foreign Affairs Minister, Mohammed Abdur Rahman Al-Thani, said Friday that the solution to the Gulf crisis must be comprehensive, denying any link between resolving the crisis and normalization with Israel. He added, “Normalization with Israel at the present time will not add any momentum to the Palestinian cause.”

Qatar’s Deputy Prime Minister and Foreign Minister Mohammed said on a videoconference on December 4 that Qatar is very optimistic about resolving the Gulf crisis and is positive about any initiative to achieve peace in the region.

Jared Kushner, Senior Advisor to US President Donald Trump, and US Special Envoy to the Middle East met Qatar’s Emir, Sheikh Tamim bin Hamad Al Thani in Doha on December 2. On what may be his last trip to the region, Kushner worked to bridge the divide between Saudi Arabia and Qatar, following talks with Saudi Crown Prince Mohammed bin Salman (MBS) in Neom on December 1, the site of the November 22 meeting between MBS, Secretary of State Mike Pompeo and Israeli Prime Minister Benjamin Netanyahu.

US media said that the visit was aimed at “reaching more diplomatic agreements in the Middle East before leaving the White House next January.” Kushner had tried to make the “Deal of the Century” between Israel and the Palestinians, but the deal fell flat.  To ensure added security for Israel, Trump and Kushner are pushing for Arab nations to normalize relations with Israel, and ending the blockade of Qatar makes the region more secure and unified in the face of Iran.

On December 3, The New York Times reported that Trump’s administration wants to resolve the Gulf crisis before its departure to guarantee to tighten the screws on Iran.

The Trump administration is pressing Saudi Arabia to open its airspace for Qatari flights that pay millions of dollars to use Iran’s airspace. MBS had forged a close relationship with Trump and Kushner, and Abu Dhabi Crown Prince Mohammad bin Zayed (MBZ) also has strong ties with the US President and his son in law.

On September 14, US Secretary of State Mike Pompeo said, “To keep our focus on this work and to close the door to increased Iranian meddling, it’s past time to find a solution to the Gulf rift.”

Trump’s administration focused on uniting the GCC countries with Israel to form a unified front against Iran but neglected to address the deep divisions that caused the crisis, such as Qatar’s support of the Muslim Brotherhood, which they share in common with Turkey, who has been another big problem for Trump.

The US is oil self-sufficient, and they don’t need to defend Saudi Arabia, the other oil-rich monarchies, of the Straits of Hormuz. The US wants to drawdown some bases and troops in the region, but can’t leave Israel surrounded by hostile neighbors. By promoting normalization between the Arab nations and Israel, the US may be able to leave the area one day.

Arab countries have normalized with Israel

Saudi Arabia remains keen on improving security ties with Israel to contain Iran, but without openly normalizing relations. However, Egypt and Jordan signed a peace treaty with Israel decades ago, and during the summer the UAE and Bahrain signed the Abraham Accord, which normalizes relations with Israel.

Former Saudi intelligence chief and former ambassador to the US, Prince Bandar bin Sultan, criticized the Palestinian leadership for condemning Gulf states which decided to normalize ties with Israel. His remarks in October called Palestinian leaders “failures” and signaled that Riyadh’s support for them was eroding.

Publically, the Arab Peace Initiative, which Saudi Arabia unveiled back in 2002 still represents the Arab world’s basis for normalization with Israel. The Saudi foreign minister, Prince Faisal bin Farhan, told the Manama conference on December 5 that Riyadh was “completely open to full normalization with Israel.” The only condition first was for “the Palestinians to get their state, and we do need to settle that situation.”

At the regional security conference in Manama recently, the former Saudi intelligence chief Prince Turki Al-Faisal, the seasoned former ambassador to the UK and the US, attacked Oman on foreign interference and called Israel the “last of the Western colonizing powers in the Middle East” and doubting its commitment to peace with the Palestinians, as well as its claim to be a democracy, which provoked the foreign ministers of Oman and Israel who were in attendance.

“They’re demolishing homes as they wish and they assassinate whomever they want, and yet the Israeli Knesset passed a law that defines the citizenship of Israel as exclusively Jewish, denying the non-Jewish inhabitants of Israel of equal rights under the law,” said Prince Turki while asking, “What kind of democracy is that?”

Iran and the Arab Gulf

As a result of the blockade, Qatar moved closer to Iran and Turkey, establishing international supply channels and becoming independent of its neighbors.  One year after the blockade began, Iran’s exports to Qatar increased five-fold and are expected to increase 15 times by 2022. Qatar’s leaders have also repeatedly spoken out in support of Iran.

Abdulaziz Aluweshej, Assistant Secretary-General of the GCC, said that Iran’s role in the region is a major issue of concern between the US and the Gulf Arab countries, and both intend to contain Iran.

Some experts have asked why the GCC doesn’t negotiate directly with Iran, to establish some common ground, rather than only serving the US and Israeli interests.

Turkey and Qatar are both led by the political ideology of the Muslim Brotherhood, which has been associated with many terrorist groups in Syria and Libya.

Egypt accused Qatar of undermining Libya’s current peace talks, following an agreement on November 13 between Doha and the internationally recognized Government of National Accord (GNA) in Tripoli. Qatar agreed to provide support and training to the GNA’s military force, which is run by terrorists following Radical Islam, and the Muslim Brotherhood. Turkey is also on the ground in Libya, having sent armed terrorists from Idlib, Syria to Libya.

To counter the government of Tripoli, the UAE has funded General Haftar, who is fighting to establish a secular government in Libya.

The Obama-NATO war on Libya for regime change in 2011 succeed only in destroying the country, killing thousands, and has left the country after 10 years of chaos under the control of the Radical Islam ideology, which President Macron recently declared France was at war with.

Saudi Arabia’s foreign minister, Prince Faisal bin Farhan Al Saud said recently that his country was seeking ways to end the blockade on Qatar. “We continue to be willing to engage with our Qatari brothers, and we hope that they are as committed to that engagement,” said bin Farhan in October.

On December 4 Prince Faisal said, “We hope that this progress can lead to a final agreement which looks in reach, and I can say that I am somewhat optimistic that we are close to finalizing an agreement between all the nations in the dispute to come to a resolution that we think will be satisfactory to all.”

Kuwait is the broker

Kuwaiti foreign minister Sheikh Ahmad Nasser Al-Sabah, who is heavily involved in mediating negotiations, declared that “fruitful discussion has taken place” and that both sides wanted “to reach a final agreement.” Qatari foreign minister Muhammad bin Abdulrahman Al-Thani thanked the Kuwaitis for their mediation and said that there is “a movement that we hope will put an end to this crisis.” Saudi Foreign Minister Faisal said that Saudi Arabia appreciated Kuwait’s efforts to resolve the crisis.

The 41st annual summit for the Gulf Cooperation Council (GCC) is scheduled to take place in Riyadh later in December and may provide a venue for resolving the Gulf crisis with Qatar, especially as the GCC now operates under a Kuwaiti Secretary-General.

Saudi, the UAE, Bahrain, and Qatar will be negotiating the points of contention and the demands that have been in place since the crisis erupted in 2017, through working groups that will be tasked with drafting a final agreement.

Joe Biden’s victory in the US Presidential elections has put pressure on Saudi Arabia to alter its foreign policy.

Biden has criticized MBS throughout his presidential campaign, promising to “reassess” Washington’s ties with Saudi Arabia over the killing of Washington Post columnist Jamal Khashoggi in September 2018, and the Saudi-led war in Yemen.

Biden didn’t call for an end to the blockade against Qatar, but his pressure on MBS could force the Crown Prince to alter Riyadh’s foreign policy, and stopping the blockade would be an important first step, as Saudi Arabia might want to paint itself as a diplomatic bridge-builder to the upcoming Biden administration.

Trump’s departure will remove the support and protection MBS enjoyed during his 4-year term.

Biden has warned Saudi Arabia that he will reverse some of Trump’s policies, which include new negotiations with Iran. This makes Gulf unity of urgent concern.