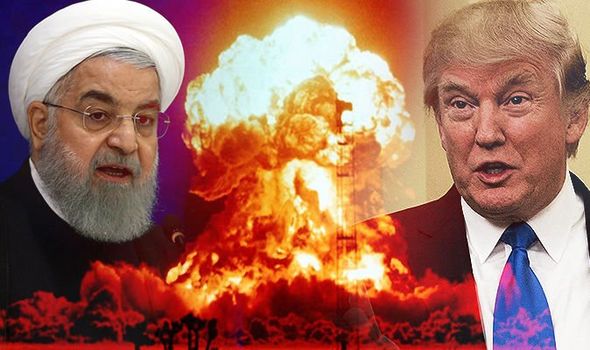 Today marks the first anniversary of the assassination of Qasem Soleimani, who died January 3, 2020, at the Baghdad airport when his car was attacked by a US drone, on orders of President Donald Trump.  Iran has vowed revenge for the death of the Iranian major general of the Islamic Revolutionary Guard Corps (IRGC), who was the second most powerful person in Iran.

Just days before Trump is to leave office, the potential for escalation could lead to a wider war, and some military experts are wondering if Trump wants to ‘go out with a bang’. Iran’s Foreign Minister Mohammad Javad Zarif on Thursday accused outgoing President Trump of aiming to fabricate a “pretext for war”.

Iran has promised revenge and has vowed it will come in stages. Last year, the first stage was carried out in an attack on a military base in Iraq which houses US troops, resulting in injuries, but no deaths.

On December 19, the US Embassy’s “Green Zone” was attacked by rockets.  The Iraqi government laid the blame for the attack on an outlawed Iraqi group. However, Trump issued a threat on Twitter to Iran, while alluding to intelligence pointing to a possible planned attack on Americans in Iraq. Trump has drawn a “Red Line” in the sand, and wrote, “If one American is killed, I will hold Iran responsible. Think it over.”

When Obama issued his “Red Line” concerning chemical use in Syria, it was a “Green Light” to the Radical Islamic terrorists on the CIA payroll.  It is feared that the enemy of Iran may use the Trump threat to stage a ‘false-flag’, in which an attack on Americans will happen, and erroneously blamed on Iran.

Tensions in the region are at a fever-pitch, after the US aircraft carrier Nimitz was moved into the region in December, and on Wednesday, two B-52 Stratofortress bombers flew over the Persian Gulf, avoiding Iranian airspace in a 36-hour show-of-force. In an apparent divide among US defense officials, the Pentagon called the Nimitz home recently.

President Hassan Rouhani said Trump had committed an “unforgivable crime” in ordering the killing of Soleimani, and also said, “You severed our general’s hand, we will sever your leg from the region and continue to resist until that day.”

Iran’s judiciary chief on Wednesday stated Trump is a main target of prosecution and vowed to legally pursue Trump after he leaves the White House on January 20.

“Legally pursuing the crime of the US regime, especially Donald Trump, for issuing the order to assassinate martyr general Soleimani in international courts has its special requirements and immunity for heads of state from legal prosecution prevents this,” Ebrahim Raisi said.

The United Nations special rapporteur on extrajudicial, summary or arbitrary executions, Agnes Callamard, considered the assassination as a violation of international law as well as US domestic laws. In July, Callamard said Soleimani’s assassination represented a violation of international law, a statement which the US blasted as “giving a pass to terrorists”.

Soliemani was assassinated by Trump for political gain in his re-election campaign; however, he lost the election. Tensions with Iran began after Trump withdrew from the 2015 nuclear deal with Iran in 2018.

Tehran prosecutor Ali Alqasimehr claimed at a news conference on Wednesday, that a British security firm, G4S, played a role in the killing of Soleimani. The British company admitted it was in charge of “a number of security requirements” outsourced by the Iraqi Civil Aviation Authority at the time of the assassination. Alqasimehr also said the US had used the Ramstein Air Base in southwestern Germany in Soleimani’s assassination, and “handled reports on guiding the drone for the assassination and handed flight data of the drones to American forces”.

Ramstein serves as headquarters for the US Air Forces in Europe, also for NATO Allied Air Command, and has acted as a control center for the US drone operations in West Asia.

Soliemani was the coordinator between the various resistance allies of Iran, and he was in charge of the Middle East folio for the Iranian Republican Guard (IRG). He played a huge role in fighting ISIS in Iraq and Syria, assisted the Syrian Arab Army (SAR), and improved the Iraqi resistance against the US occupation. He played a huge role in the 2006 attack on Lebanon and was one of the reasons for the Lebanese victory over the Israeli military. He supported Palestinian resistance, especially in Gaza. Soliemani’s death had a positive effect on the resistance movement, as the situation on the ground remained unchanged, but the resistance became more motivated.

The leader of the Lebanese resistance said Soliemani was the coordinator between Damascus and Moscow and was responsible for proposing the Russian military to enter Syria legally to fight the global war on terror.

Abu Mahdi al-Muhandis was killed along with Soleimani. He had been offered the office of Prime Minister of Iraq several times, but refused and continued his fight against terrorism and occupation. He was the deputy chairman of Iraq’s Popular Mobilization Forces (PMF) and commander of the Iran-backed Kata’ib militia.

The Iraqi government said the assassination of Soleimani and al-Muhandis undermined its national sovereignty and considered it a breach of its bilateral security agreements with the US and an act of aggression against its officials. On January 5, 2020, the Iraqi parliament passed a non-binding resolution to expel all foreign troops from its territory, directed at the US troops. The Iraqi government asked the US military for help in the fight against ISIS. However, since the defeat of ISIS, the US troops have not gone home, but have become an army of occupation, which has caused street protests as the Iraqi people fight against the US occupation once again.

Radical Islamic terrorism and occupation are connected. Al Qaeda was created by the US to fight against the Soviet Union’s occupation of Afghanistan. There have been numerous reports of US military support for ISIS.  Recently, 33 SAR soldiers were ambushed and killed near the US military post at Al Tanf in eastern Syria. The ISIS terrorists are near the US base, which affords them protection, as no Russian or Syrian military attack on them can be waged so close to the American troops. While it is difficult for many westerners to accept that the US military may use terrorists for their benefit on the ground, we can’t forget that the Free Syrian Army, also known as “Senator John McCain’s Army”, was aligned with the Syrian branch of Al Qaeda in the CIA program which Trump shut down in 2017.

President-elect Joe Biden has said that he hopes to return the US to a 2015 agreement with world powers in which Iran agreed to limit its nuclear activities in exchange for the lifting of international sanctions.  With days left ahead of the transition to a Biden administration, it remains to be seen if there will be a peaceful transition or a military showdown in the Persian Gulf.

Steven Sahiounie is an award-winning journalist and political commentator