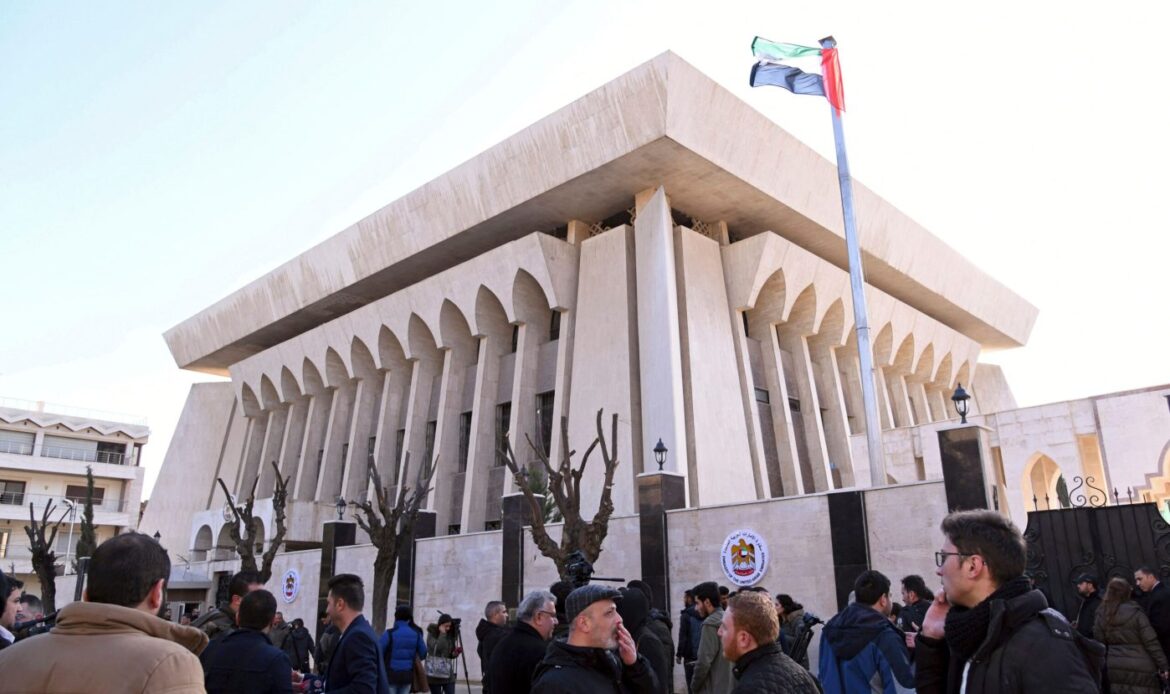 Will Syria benefit from the recent Gulf unity?

With an end to the Qatar blockade and a possible rapprochement with Turkey, Saudi Arabia may soon move towards reconciliation with Syria.

The Persian Gulf states’ opposition to Iran’s role in the region, while limiting Turkey’s influence, may bring Saudi Arabia and the Gulf back to Damascus.

The Gulf monarchies did not support the Muslim Brotherhood ideology of the terrorists in Syria, such as the Free Syrian Army and other Al Qaeda affiliated terrorists. However, the oil-rich Gulf states did the bidding of their main western ally, the US administration of Barak Obama, who was the architect of the US-NATO attack on Syria beginning in 2011 for ‘regime change’. Given the fact, which President Trump publically stated, the kings and princes of the Persian Gulf are only in power at the behest and allowance of the US, the Arabs were not afforded the luxury of refusing the US when asked to fund the US-backed terrorists.

Some critics had claimed Obama was himself a follower of the Muslim Brotherhood, as evidenced by the many members he had closely associated with in the US; however, others have assessed that while he may have been sympathetic to the group, in reality, he was only using the Radical Islamic ideology to instigate an insurrection in Syria for ‘regime change’.

Iran and their Persian Gulf neighbors share not only geography but also an aversion to Radical Islam. However, one is seen as the enemy of the US, and the others are close allies who host some of the largest US military bases on earth.

Dr. Saad Al-Jabri revealed that the Saudi Crown Prince, Mohammed bin Salman, was encouraging Russian President Vladimir Putin to intervene in Syria two months before the Russian armed forces entered the battlefield in October 2015, which effectively ended any chance of a military victory for the armed Syrian opposition, although the Kingdom had previously supported them.

At the same time, Iran’s General Qasem Soleimani, later assassinated by Trump, was also asking the Russians to enter Syria militarily to fight the terrorists who were fighting to create an Islamic State in Damascus, in another example of commonalities between Saudi Arabia and Iran.

Saudi Arabia and the UAE are opposed to any democratic movement within the region. In Egypt, Tunisia, Palestine, or Libya, the Persian Gulf monarchies prefer secular autocrats, such as President Assad of Syria.  They specifically do not want a leader following Radical Islam, such as the Muslim Brotherhood leader of Turkey, Recep Tayyip Erdogan.

In 2017 Trump cut the CIA program to the terrorists, and Trump washed his hands of the Obama nightmare in Syria. Eventually, Saudi Arabia stopped funding terrorist groups in Syria.

Saudi Arabia has been funding the US troops in north-east Syria, where they protect the Kurdish SDF and YPG, and steal Syria’s oil, at a cost of $500 million and counting.

The Saudi goal is to curb Iranian influence in Syria while undermining the terrorists.  The Turkish backed terrorists, following the Radical Islamic platform of the Muslim Brotherhood, are unacceptable to Saudi Arabia and the UAE.

Trump’s ‘maximum pressure’ strategy managed to limit further Iranian expansion in his four years in office, but it could not hold it or even reverse Iranian progress on the ground in the Middle East. By trusting Trump’s plan, Saudi Arabia lost its influence and failed to counter Iran, which is stronger than before, and the incoming Biden administration has promised to make a deal with them.

Gulf leaders signed a “solidarity and stability” agreement towards ending the diplomatic rift with Qatar at a summit in Saudi Arabia on January 5.

The announcement was made at the Gulf Arab leaders’ meeting in Saudi Arabia, with the annual summit taking place amid a breakthrough in the dispute between a Saudi Arabia-led bloc and Qatar that started in June 2017.

The five-points made concerning Syria were: affirming the goals of UN resolution 2254; support of the Syrian Constitutional Committee; support for bringing refugees and displaced Syrians back to their homes; support to preserve the territorial integrity of the Syrian Arab Republic; condemnation of the Iranian presence in Syria, and Iran’s interference in the Syrian affairs, and demanded the removal of all Iranian forces, Hezbollah and all sectarian militias that Iran had recruited to operate in Syria.

Hamad bin Jassim bin Jaber al-Thani, former prime minister of Qatar, said in 2017, that there had been a relationship with Jibhat al-Nusra, which was the Al Qaeda affiliate in Syria. However, he said that any resources sent to terrorists in Syria had US approval.

“Anything that went to Turkey and was coordinated with US forces,” he explained, while adding, “All distribution was done through the US and the Turks and us and everyone else that was involved, the military people.”

He also said that he had been sent by the emir of Qatar to meet with then Saudi king Abdullah and received his backing for the support for the terrorists in Syria.

Qatar has been a major supporter of the terrorists since 2011. A report by the Financial Times in 2013 said the country had spent as much as $3bn bankrolling armed groups in the country.

Saudi Arabia had coordinated closely with Qatar on delivering resources to terrorists in Syria; but in 2017 Saudi Arabia, along with others, had blockaded Qatar based on accusations of supporting terrorist groups, such as the Muslim Brotherhood. Trump had cut off support to the terrorists in Syria in 2017, and the US expected all Arab allies to follow their directive; however, Qatar did not, instead teaming-up with the Muslim Brotherhood leader, President Erdogan of Turkey, who invaded Syria and developed a large terrorist army who he calls the Syrian National Army.

Qatar pulled its ambassador from Syria in 2011 and remains staunchly against the Syrian government, while in support of the terrorists who are killing unarmed Syrian civilians. Qatar has provided substantial funding to terrorists, and by 2011 Qatar’s foreign minister confirmed the country’s support for the Syrian National Coalition and the Free Syrian Army.   Qatar is supportive of the Turkish invasion of Syria and continues to support ‘regime change’ in Syria, regardless of the fact both Syria and Qatar have close ties with Iran.

The United Arab Emirates (UAE) reopened its embassy in 2018 after 7 years of closure, marking a diplomatic boost for President Assad. The UAE said the move aimed to normalize ties and to curb Iran in the region and had been training Syrian intelligence officers and pilots for two years.

“The UAE decision … came after a conviction that the next stage requires the Arab presence and communication in the Syrian file,” tweeted Anwar Gargash, the UAE minister of state for foreign affairs.

The reopening of the embassy is a step towards Syria’s normalization among the Arab world, as its membership in the Arab League was suspended seven years ago, though most Arabs states now want Syria to be readmitted.

The UAE was one of several regional states to back the terrorists, though its role was less prominent than those of Saudi Arabia, Qatar, or Turkey; however, it sees a huge opportunity to participate in the massive reconstruction of Syria estimated between $250 billion and $1 trillion.

Gulf Arab states have been in the news in recent months as they normalize relations with Israel. At the same time, some are reestablishing ties with the Syrian government in Damascus.

The Gulf Arab states pulled their ambassadors from Damascus, and the Gulf Cooperation Council (GCC) recognized the National Coalition of the Syrian Revolutionary and Opposition Forces as the “legitimate representative” of the Syrian people at the directive of the US and EU.

Beginning in 2015, the Russians helped the Syrian government control the main political and economic centers, such as Damascus, the coastal region, and Aleppo. By now, the idea of bringing down Assad ceased to be a practical policy for most Gulf Arab countries, as well as the US and EU.

Following the footsteps of the UAE, Bahrain reopened its embassy in Damascus in 2018 while emphasizing opposition to Iran’s role in the region and limiting Turkey’s influence

Oman was clear about its humanitarian and diplomatic approach toward the Syrian war and did not finance rebel groups, and the sultanate has reinstated its ambassador to Syria.

Much of the funding for terrorists in Syria had come from Gulf private citizens, particularly Kuwaitis, according to US officials in 2013.

Saudi Arabia’s response to the Syrian uprising was strategic in that it focused on a proactive foreign policy through Gulf alliances that aimed at suppressing Iranian influence.

Since the battle for Aleppo in late 2016, it became clear to GCC states that the Syrian government was going to maintain its hold on power. This prompted many Gulf states to shift their policies, making their priority curbing Iranian and Turkish influence in Syria.

Turkey’s relations with Saudi Arabia have suffered as a result of Erdogan’s aggressive foreign policy to exert its influence in the Mediterranean and Africa.

Ankara and Riyadh’s competition for regional dominance could be easing as countries’ leaders pledge to improve ties amid the COVID 19 pandemic.

Turkey hopes by approaching Saudi Arabia, it would help the economy in the wake of a Gulf boycott of Turkish goods and products.

Turkish-Saudi relations could also lead to a regional diplomatic reset which could directly affect Syria.

The National Coalition of the Syrian Revolutionary and Opposition Forces, are the big losers. Their militia, the Free Syrian Army, lost the backing of the US-EU, Saudi Arabia, and the UAE. Qatar and Turkey are now singled out as the last state sponsors of Radical Islam in the Syrian conflict.