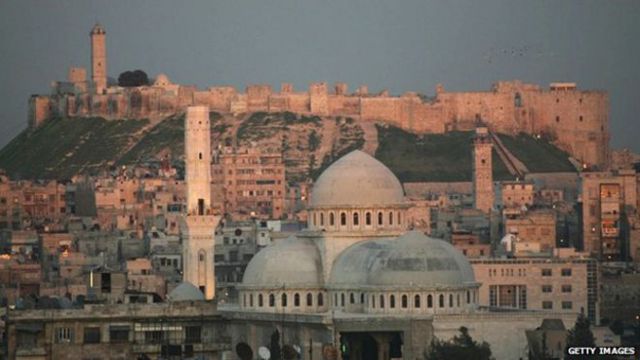 Saint Simeon, on the outskirts of Aleppo, was the largest church in the world in the fifth century. After Islam arrived in Syria, the country has remained a dense mixture of cultures and faiths, living in tolerance and cooperation until 2011, when a US-NATO war for ‘regime change’ began which destroyed the country, and scattered its citizens to the far corners of the world.

According to UNESCO, Aleppo is the oldest continuously inhabited city in the world, and it has survived the war but faces many challenges to recover, rebuild, and bring its citizens back home.

“What’s special about this city is its living cultural heritage,” says Dima Dayoub, an Aleppan architect now working in Berlin for the Syrian Heritage Initiative. “The priority is not the churches or the mosques, it’s for people to return. We need to help people reconstruct their homes and their livelihoods.”

An American in Syria

Drew Binsky is an American traveler who visited Aleppo in 2019 and produced a video showing life in Aleppo. Seeing the city and its people in a video brings the story of the city to life, and makes it real.

Syrian Air is expanding with a new Aleppo-Beirut service. The route will operate once a week on Fridays in both directions.

The airline flies to Dubai, Abu Dhabi, Sharjah, Doha, Moscow, and Cairo. Syrian Air only flies to one European destination, Yerevan due to ongoing EU and US sanctions.

In February 2020, the Syrian Arab Army (SAR) established full control over the Aleppo-Damascus highway, which is a strategically important transportation route. Aleppo is the industrial capital of Syria.

The SAR, advancing from the Western outskirts of Aleppo, liberated Sheikh-Ali, Arada, Arnaz, Khan el-Asal, and the Rashideen-4 district from terrorists.

Major General Yuri Borenkov, the chief of the Russian Center for Reconciliation of Opposing Parties in Syria, said that the security zone called for in the September 2018 Russian-Turkish memorandum had been partially achieved by liberating the highway from the terrorists, and he believed this would provide security for the Syrian residents.

How the war came to Aleppo

According to Wedad Mohammed, they went to sleep in East Aleppo in 2012 and woke up the next morning under the occupation of the Free Syrian Army (FSA), which was supported by the Obama administration.  At first, they thought they might be able to stay in their home and continue working under occupation, but the strict enforcement of Sharia (Islamic Law) made life unbearable for Wedad and her family, who moved to Latakia as displaced persons.

In the last days of December 2016, CNN and BBC were featuring the battle for east Aleppo daily. Usually, they referred to the city as Aleppo, but the battles were in the eastern district. The international viewer came away with the impression that the largest city in Syria was engulfed in raging battles. Aleppo was not all besieged, and not all bombed into rubble. The eastern section of Aleppo had been occupied by armed terrorists. Some were the FSA, which was a local militia following the Muslim Brotherhood directives out of Istanbul. But, others were Al Qaeda affiliates and foreign fighters who had been imported from as far away as Afghanistan, Pakistan, the UK, and France. All these groups, whether being paid by Qatar at the behest of the US, or by Saudi Arabia, were following Radical Islam, which is a political ideology and is not a religion, nor a sect.

The ‘last doctors’ in Aleppo

In August 2016, CNN featured an appeal by the last 15 doctors in Aleppo, asking President Obama to take military action.

“We do not need tears or sympathy or even prayers. We need action,” their letter to Obama read. The doctors added: “We choose to be here. We took a pledge to help those in need. ”

What CNN failed to explain was there were free public hospitals in the western side of Aleppo that could have served the needs of those patients, and they had never closed even in the darkest days of the war 2012-2016. However, some of those doctors remained because they were followers of Radical Islam and identified with the terrorists. Those doctors could have served their patients well by arranging for the Syrian Red Crescent to rescue their patients through the humanitarian corridors for civilians to leave the eastern district. The FSA snipers killed dozens of people, some whole families, as they attempted to flee to safety.

In stark contrast are the Catholic hospitals of Aleppo. Suffering has held together the bricks of Syria’s reconstruction, according to the “Open Hospitals” project launched in 2017, and sponsored by the apostolic nuncio, Cardinal Mario Zenari.

The Catholic hospital of Saint Louis of Aleppo, built-in 1905, is a 60-bed facility run by the nuns of Saint Joseph of the Apparition, to offer free treatment to the most vulnerable and destitute patients, despite the severe US and EU sanctions that affect medical facilities.

“Only 44 out of 141 health infrastructures are still functioning in Aleppo as a result of the war,” said George Theodory, head doctor at Saint Louis of Aleppo, who added that there are long waiting times for diagnosis and treatment as a result of the US and EU sanctions.

” The situation is very different today. There is no more fighting except in the area of Idlib, but we are facing another war that bears the name of poverty,” said Sister Fekria, while pointing an accusing finger at the US and EU sanctions that have been direly affecting the population. Electricity, gas, and fuel are rationed. The sanctions on banking prevent many foreign pharmaceutical companies from trading with Syria, causing a lack of medicines and difficulties in finding medical supplies and equipment.

The Syrian government has rehabilitated 52 health centers and hospitals, in addition to 1,620 schools, with over one thousand projects being announced by the local administration.

The first full satellite survey of devastated ancient Aleppo is called “Five Years of Conflict: The State of Cultural Heritage in the Ancient City of Aleppo,” and was made by the UN Institute for Training and Research (UNITAR), and cultural heritage experts from the UN Educational, Scientific and Cultural Organization (UNESCO), working closely with historians, architects, and archaeologists.

The study shows that, between 2014 and 2015, most of the historic buildings south of the ancient Citadel were destroyed or severely damaged,

Audrey Azouley, Director-General of UNESCO, said that the technology provides a “remarkable tool with unmatched precision for documenting and understanding heritage” adding that it could also pave the way “for the eventual recovery of the city.”

What has been restored?

Construction and restoration activities in Aleppo were the main source of income for a large proportion of the city’s population; however, the increase in the price of cement has stopped some housing projects.

Thousands of structures in Aleppo’s neighborhoods, including houses, schools, and hospitals, particularly in the eastern parts of the city, were destroyed in the bombing when the city was under the control of the terrorists.

The Aleppo governorate witnessed the highest destruction level in Syria, with more than 35.7 thousand buildings destroyed.

Residents who have returned to some eastern Aleppo neighborhoods have repaired their houses, such as in the Masaken Hanano area, al-Shaar, the al-Bab road, and the al-Maysar.

The Syrian government has limited its restoration and rehabilitation activity to government facilities, and some schools in the neighborhoods of al-Jazmaty, al-Ferdous, and al-Saliheen.

Aleppo was the symbol of the material and cultural wealth that once made Syria one of the most civilized places in the world.  Blessed by climate, fertile land, physical beauty, and its position between the Mediterranean and the east.

The citadel sits atop a mound, with a moat, and the castle is the icing on the cake. The souks are a web of covered alleys and streets, which make up the first ‘shopping malls’ on earth, and are gems of architecture.

The Aga Khan Trust for Culture is supporting the rebuilding of some of the Aleppo souks, and some churches have been restored with the help of congregations abroad.

What’s next for Aleppo?

The Syrian people have suffered. Syrians who remained in the country have high hopes for 2021 being the year of peace and renewal. Syrians abroad may be homesick and waiting for the chance to return, but need security, an improved economy, and more electricity and gasoline supplies to make the long journey back home.