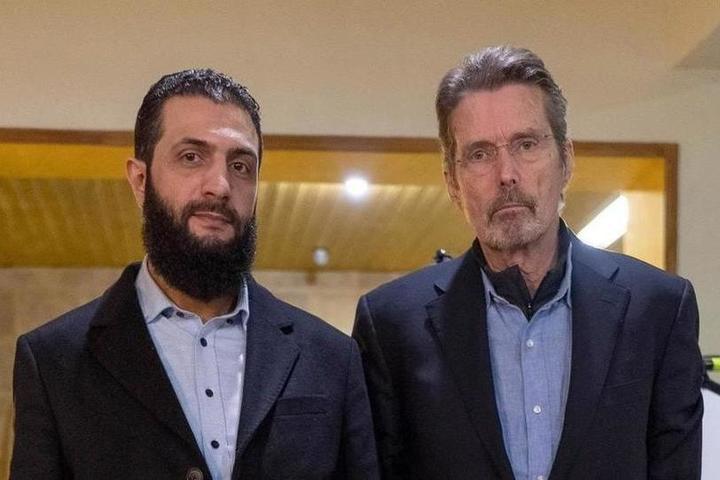 Jolani gets a make-over in Idlib

The administration of President Joe Biden may use a new tactic to bring Damascus to its knees. The ‘regime-change’ policy of Obama, which spawned ‘forever-wars’ in Libya and Syria, has a new twist.

Biden could choose to solve the Syrian conflict through diplomacy, but he may have tasked Secretary of State Anthony Blinken with re-inventing a terrorist following Radical Islam, and with a $10 million bounty on his head, as the new leader of Syria.

Abu Mohammed Al-Jolani, the leader of Syria’s Hayat Tahrir Al-Sham (HTS), which had been previously named Jibhat al-Nusra, and where the Al Qaeda affiliate in Syria, had changed their name in a previous bout of re-branding their image.

The US is now in the process of changing the mask on HTS in Syria, as the group is listed by the US, EU, Russia, the UN, and Turkey as a terrorist group.  Jolani took off his guerrilla warfare uniform and switched to a business suit recently in a PBS “Frontline” interview with journalist Martin Smith. Western audiences may be fooled by the new look, but the residents of Syria know the true Jolani. Washing away the gallons of blood on his hands will take a much deeper sanitizing than a new suit.  Biden may have a hard time explaining the support of Jolani to French President Macron, who has officially declared war on Radical Islam.

The US had justified their illegal occupation of Syria as necessary to fight Islamic State (IS) terrorist group. The group was successfully dislodged from the territory they had held in northeast Syria.

The sole remaining territory held by an armed group following Radical Islam is Idlib, in the northwest, an area which US officials once described as “the largest al-Qaeda safe haven since 9/11”. Western media describes Idlib as ‘a last stronghold of Syrian rebel groups’.  The US and its media outlets have used the terms ‘terrorists’ and ‘rebels’ interchangeably, which has effectively re-branded blood-thirsty criminals into freedom fighters.

Trump had inherited the Syrian conflict from Obama, and he did not work toward any solution but held the status-quo, which saw US troops illegally stationed in Syria to steal the oil. Trump allowed Saudi Arabia to write the US foreign policy on Syria, due to his tight relationship with Crown Prince Mohammed bin Salman.

The US refused to beat HTS, instead, they protected them in Idlib, and have denounced Syrian and Russian attacks on the group. Now, the US has joined with HTS leader Jolani as their new man to lead Syria, still committed to the US policy of ‘regime change’.

The names change, but the essence is the same. In Syria, there were many armed groups, from the Free Syrian Army to Al Qaeda, and IS. Each had a leader, and a name, but in essence, all were the same: men killing people in the name of God. Their goal is ‘regime change’ and the regime they seek to install in Damascus is an Islamic government, with Sharia as the constitution and rule of law.

Turkey invaded Idlib and has 20,000 troops there, but has been reluctant to publically support HTS, because of the ‘terrorist’ listing.  The US may begin a process to remove HTS from the terrorist label, which would open up greater aid and western investment in Idlib. At the same time, this close cooperation in Idlib between the US and Turkey could strengthen a fragile relationship between the two NATO partners. However, Turkey is ruled by a Muslim Brotherhood party, AKP, and there are calls by many in the US and the Arab Gulf states, to designate the Muslim Brotherhood a terrorist group.

The sizable Christian population in Idlib has suffered greatly at the hands of HTS and other Radical Islamic terrorist groups. Not only physical suffering but their properties were seized and they were made destitute and homeless.

The Russian-Turkish ceasefire remains fragile, while joint patrols along the M4 highway have essentially halted since August from terrorist attacks on trucks and civilians. The March 2020 agreement between Russia and Turkey explicitly calls for both sides to “combat all forms of terrorism, and to eliminate all terrorist groups in Syria as designated by the UN Security Council, which includes HTS.

Jolani fought in the post-2003 Iraq war as a member of the Islamic State of Iraq (ISI, which later became ISIS), and in 2011 brought ISIS to Syria. He left ISIS in 2013, and declared allegiance to Al Qaeda, and established their affiliate in Syria, Jibhat al-Nusra.

Al-Nusra became known for being more brutal than all others and was feared and loathed by the Syrian civilians who were their victims. The group carried out war crimes and massacres of unarmed civilians sleeping in their own homes near Latakia in 2013. Killing, maiming, raping, and kidnapping was their calling card.

Jolani has been recast as the local Syrian leader capable of governing Idlib. However, Syria is a much bigger place than Idlib, which is a small agricultural area, only known for its olives. What about the biggest city, Aleppo, or the capital Damascus: what would the residents there think of an ex-ISIS member being in charge of Syria? The Syrian people have lived under a secular form of government for 40 years, and have fought against Radical Islam for ten years.  Morphing a terrorist into a leader is a fantasy conjured up in Washington, DC. but will not play well to a Syrian audience.