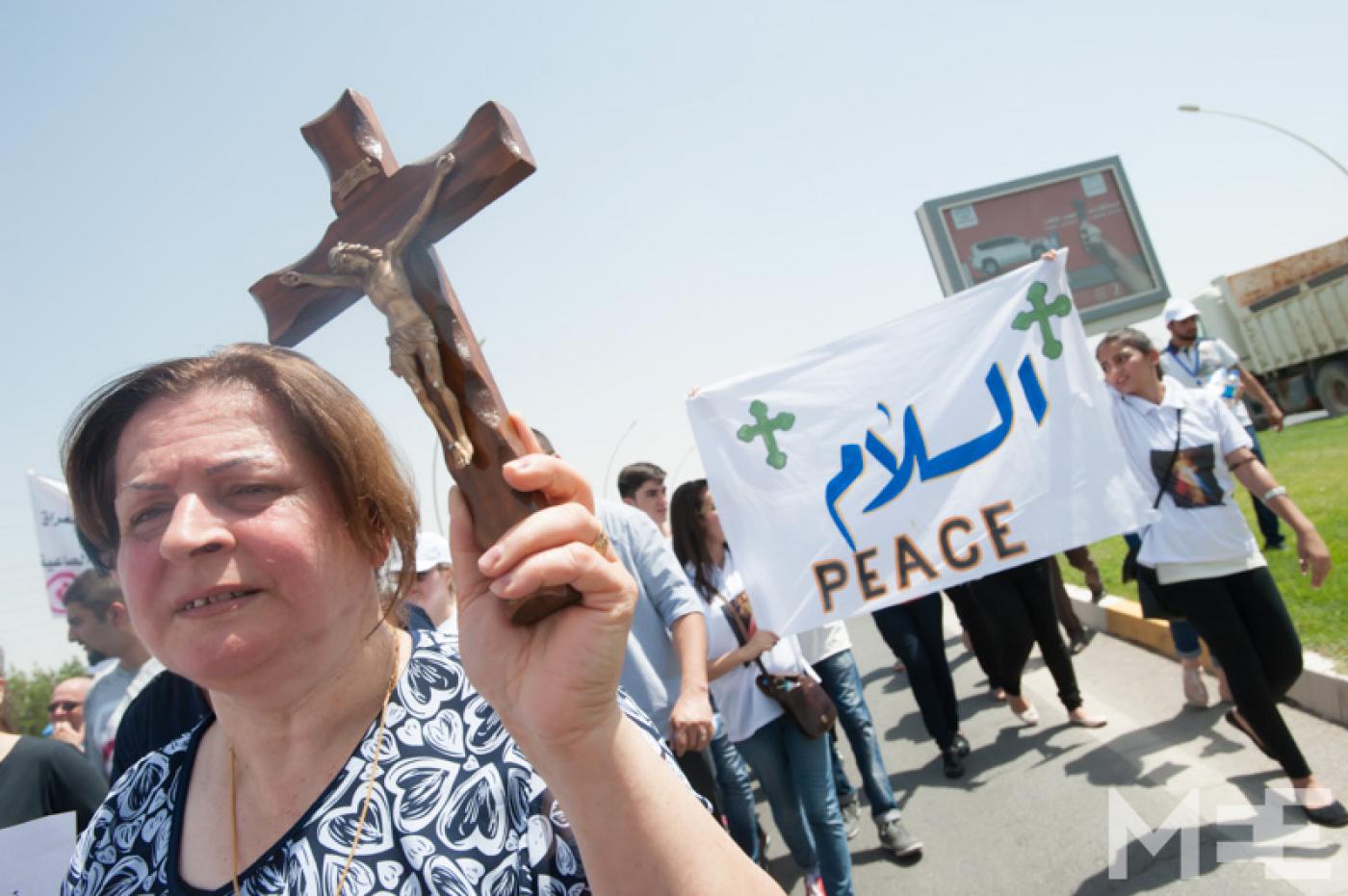 Pope Francis arrived yesterday at the Baghdad International Airport to begin a three-day visit, the first of its kind, and the first visit for the Pope abroad since the COVID-19 pandemic began one year ago.  Critics have wondered what difference the compassionate tourist could make, but the Pope has aimed to stand in solidarity with Iraqis, and their Christian fellow citizens.

While most of Iraq has yet to be vaccinated, the Pope and his entourage have been.

Prime Minister Mustafa al-Kadhimi welcomed the pontiff, although Kadhimi oversees a government that is riddled with corruption and struggles to provide basic services.

The pope’s vehicle was escorted by police motorcycles as he passed miles of concrete blast walls that were put up during Iraq’s sectarian violence after 2003, the road was one of the most dangerous in Baghdad, with frequent roadside bombs and suicide car bombs.

The official slogan for the trip is, “we are all brothers”, while the trip’s agenda begins in Baghdad, goes to Najaf, Irbil in the north, as well as Mosul.

Outside the airport, hundreds lined the roads, holding flags and waving as the pope passed by the site of a Trump-ordered drone strike that killed Maj. Gen. Qassim Suleimani and a senior Iraqi security official a year ago.

The wreckage of one of the vehicles has been preserved by Iraq’s government as a memorial to the dead and in sharp criticism of the attack.

On Wednesday, 10 rockets were fired at a military base in western Iraq that houses US forces. The Iraqi parliament has voted last year to order the US troops to leave the country, but the US under Trump, and now Biden, have refused.  The US is illegally occupying both Iraq and Syria.

Iraq’s church leaders have said they are threatened with “extinction” in the Muslim-majority country.

“Over the past several decades, Iraq has suffered the disastrous effects of wars, the scourge of terrorism and sectarian conflicts often grounded in a fundamentalism incapable of accepting the peaceful coexistence of different ethnic and religious groups,” the Pope said.

“I come as a penitent,” the Pope said, “asking forgiveness of heaven and my brothers and sisters for so much destruction and cruelty.”

In 1916, the Turkish Ottoman Empire committed a genocide that left at least two million Armenians, Assyrians, and Greeks dead. Nearly all were Christian.

The US state department seized upon a weak spot on the underbelly of Iraq, knowing there were ideological differences between Sunnis and Shiites, which are sects of Islam.  By instigating attacks and propaganda campaigns creating hatred between the two neighbors who have lived side by side in the Middle East for centuries, the west was able to leverage the sectarian strife to their advantage.  This allowed not only harvesting the Iraqi energy resources but maintaining an occupation presence in the region to this day.

The US, along with its allies, invaded Iraq in 2003 and killed hundreds of thousands of Iraqis, and maimed and displaced even more. There were no weapons of mass destruction, and the UN’s Hans Blix confirmed that before the invasion while he was in Iraq. There was not a big Al Qaeda presence in Iraq, but the invasion caused them to arrive on the scene to repel the invaders.  The invasion of Iraq is the cause of the suffering of Iraqis and especially their Christian communities.

”Americans and the West were telling us they came to bring democracy, freedom, and prosperity,” said Louis Sako, the Chaldean Catholic Patriarch of Babylon. He added, ‘‘What we are living is anarchy, war, death and the plight of three million refugees.’’

In Palestine, Syria, and Iraq the Christians are under attack.  Ethnic cleansing of Christian communities was perpetrated by the Israeli Army, the US-sponsored Free Syrian Army, Al Qaeda, and ISIS.

Iraq was once a rich tapestry of faiths, but during the period from 2013–2017 Christians fled as ISIS rapidly swept through western Iraq executing, maiming, and kidnapping.

Mosul was decimated by the US attacks on ISIS.  The Pope will visit the Syriac Catholic Church ruins in Mosul.

Saddam Hussain led the Ba’ath Party, with a secular socialist platform.  He was an authoritarian leader who ruled with an iron fist, and many citizens suffered during his tenure as president of Iraq, but the Christians were secure under secularism.

Because of the fall of Saddam Hussein, Christians began to leave Iraq, and the population shrank to less than 500,000 today from as many as 1.5 million in 2003.

The Arab Spring, a US-NATO project, only made things worse. As dictators like Mubarak in Egypt and Qaddafi in Libya were toppled, their longstanding protection of minorities also ended. The US supported sectarian terrorists like the Free Syrian Army, sometimes called the “John McCain Army”, who from the outset of conflict unfurled sectarian banners against Christians and non-Sunni sects.  While the US ‘regime change’ projected failed in Syria, the US remains illegally occupying the northeast and supporting the Kurds as they drive Christians from their ancestral homes and lands.

Andrew White is known as the vicar of St George’s Church, Baghdad, the only Anglican church in Iraq, until his departure in November 2014.

Andrew White supported the US-UK invasion of Iraq.  He knew the Christians would be slaughtered and decimated.  He corralled the Christians in his church in Baghdad while being guarded by US Army snipers and tanks.  He treated the Iraqi Christians like circus animals: soon to be extinct, and valuable assets for charity donations. He moved them to Jordan and perpetuates the notion that they are only safe in a country that has an Israeli peace agreement. He was found culpable of charity fraud in his former organization, and he has formed a new charity that has faced similar fraud accusations.

Middle Eastern Christians are in solidarity with their Palestinian brothers and sisters. The blind, and unconditional support of the Jewish State of ‘Israel’ is the central core belief of the American Evangelical political ideology. Instead of defending the human rights of Christians throughout the Middle East, the birthplace of Jesus, most American Christians feel no empathy for their counterparts in Palestine, Iraq, and Syria.

In 2015, Senator Ted Cruz admonished an audience of Middle Eastern Christians at an ‘In Defense of Christians’ event in Washington, telling them that Christians ‘‘have no better ally than the Jewish state.’’ The audience booed Cruz.

Iraqi Christians cannot safely return home to Iraq.  The government and society have become sectarian. The US insisted on an Iraqi constitution which kept the country firmly divided between the Sunni and Shiite sects. The US prides itself on being secular but demands that Lebanon, Syria, and Iraq be cut-up in sectarian strife.  Only Syria has determinedly resisted the US demands for a “New Middle East”.

The Sunnis and Shiites have been pitted against each other, and the Christians are a minority without a safety net.  Perhaps, if a new secular government was formed, and school children were educated in tolerance and respect for all religions, we might see a future for Iraqi Christian returning and reestablishing their rights to live in their ancestral homes.

Bashar Matti Warda, the Chaldean archbishop of Irbil, said of the Pope’s visit, “It’s not going to help the Christians materially or directly,” Warda conceded, “because we are really in a very corrupt political and economic system. No doubt about that. He [Pope Francis] will hear nice words … But when it comes to day-to-day issues, no, I think that’s a different story.”

“Our fortune is not in oil,” said Saad Salloum, a political scientist, “It is in diversity.”

‘‘We’ve been here as an ethnicity for 6,000 years and as Christians for 1,700 years,’’ says Dr. Srood Maqdasy. ”We have our own culture, language, and tradition. If we live within other communities, all of this will be dissolved within two generations.”