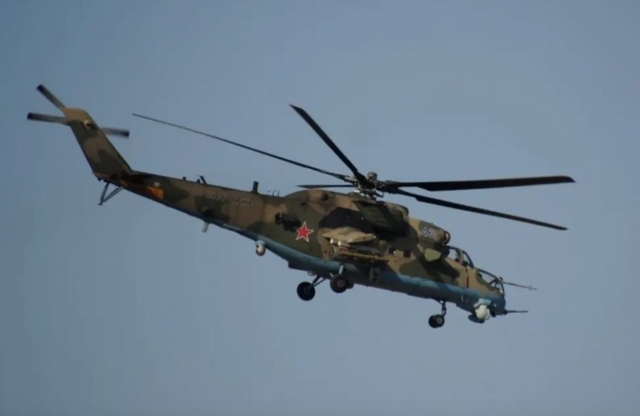 Russian army details use of Mi-35 attack choppers in Syria

The commander of the Russian Aerospace Forces, Lieutenant General Alexander Titov, indicated that the Mi-35 attack helicopters provide fire cover for Russian military cargo planes at the Hmeimim air base in western Syria.

He said, as reported by RT Arabic, “We provided fire cover for transport planes, using Mi-35 helicopters. Protecting military cargo planes is important as they transport personnel and equipment.”

He stressed, “our mission is to cover,” as he discussed the use of the Mi-35 attack helicopters during the Russian military intervention inside Syria.

“By air, the main attention is being paid to the perimeter of the base, the fields, orchards and country roads surrounding the air base,” Titov said.

Russia had previously announced that it had repelled dozens of attacks on the Hmeimim Airbase from northwestern Syria, almost all of them carried out by armed drones.

The Russian Armed Forces have accused militant groups in the Idlib Governorate of carrying out these armed drone attacks on the Hmeimim Airbase.