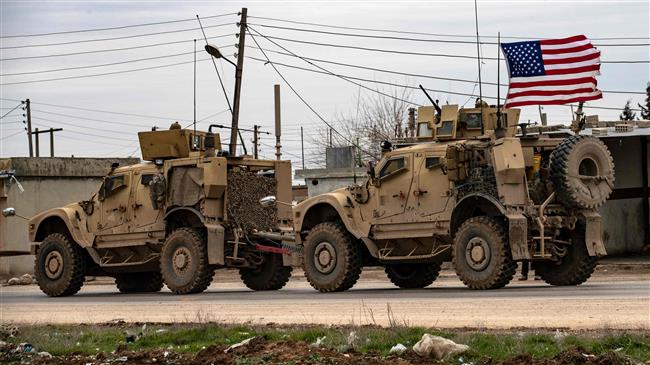 The United States continues to pursue its duplicitous mission in Syria by strengthening its already savage sanctions on one hand and announcing aid packages to the war-ravaged country on the other hand.

US Secretary of State Antony Blinken on Tuesday announced $596 million worth of what he called “humanitarian aid” to Syria, stressing that military solution will not bring peace to the country.

It comes as the draconian US sanctions coupled by unrestrained military aggression continue to take a heavy toll on Syrian civilians after a decade of West-imposed war.

The top US diplomat said the aid money will benefit millions of Syrians in need of humanitarian assistance, without mentioning the cause of humanitarian crisis in the Arab country.

The US forces continue to maintain their illegal presence in the war-ravaged country, collaborating with foreign-backed militants and stealing the country’s oil resources.

Syria, which had been in the grip of foreign-backed militancy since 2011, has gradually managed to seize back control of roughly 80 percent of territory from Takfiri terrorists backed by the West.

In response, the US has strengthened its crippling sanctions against the people of Syria, under the so-called Caesar Act, legislation floated to “support the Syrian people”.

Damascus has termed the US sanctions as “crimes against humanity” and warned that the Western sponsors of terrorism would pay a price for their actions against the Syrian people.

While the Syrian government has found supporters both in the region and outside after defeating the Daesh militant group, the US-allied coalition has been under blistering attack for fanning flames of war.

At a conference on Syria in Washington DC earlier this week, a former US state senator launched a scathing attack at the US’ “cruel and barbaric” war that has destroyed the otherwise bustling Arab country.

Richard Black, a former Republican member of the Virginia Senate, said the US administration supports terrorist organizations who destroy Syria and steal the Arab country’s wealth, and at the same time imposes harsh sanctions to deprive the Syrian people of basic necessities of life.

“I am astonished by the outrageous US aggression against Syria,” Black said. “It is important to acknowledge after ten years of war that the West loves terrorists whom the Syrian people hate.”

The former state senator also condemned illegal US sanctions against Syria and stressed that the hostile measures have caused immense suffering to the Syrian people.

While the list of US and coalition war crimes in Syria is long, the widely documented destruction was caused in the city of Raqqa in 2017.

Some ten thousand bombs were dropped on the densely populated city, destroying eighty percent of the city and causing innumerable civilian casualties.

In an article published in the New Yorker in December 2020, writer Anand Gopal said the decimation of Raqqa was “unlike anything seen in an American conflict since the Second World War”.

Amnesty International, in a detailed report in 2019, said the US-led military coalition must “end almost two years of denial about the massive civilian death toll and destruction it unleashed in Raqqa.”

In an address to the UN Security Council on the humanitarian situation in Syria on Monday, Iran’s envoy to UN Takht Ravanchi Monday said the unilateral US sanctions against Syria “only prolong the humanitarian crisis in the war-torn country and suffering of its people.”

Iran’s envoy noted that imposition of sanctions on Syria is a detrimental act that only worsens the crisis in a country that is already grappling with other difficulties, including the coronavirus pandemic.

He reaffirmed Iran’s commitment to pursuing the political solution to the Syria crisis and providing continued support to the people and government of Syria.