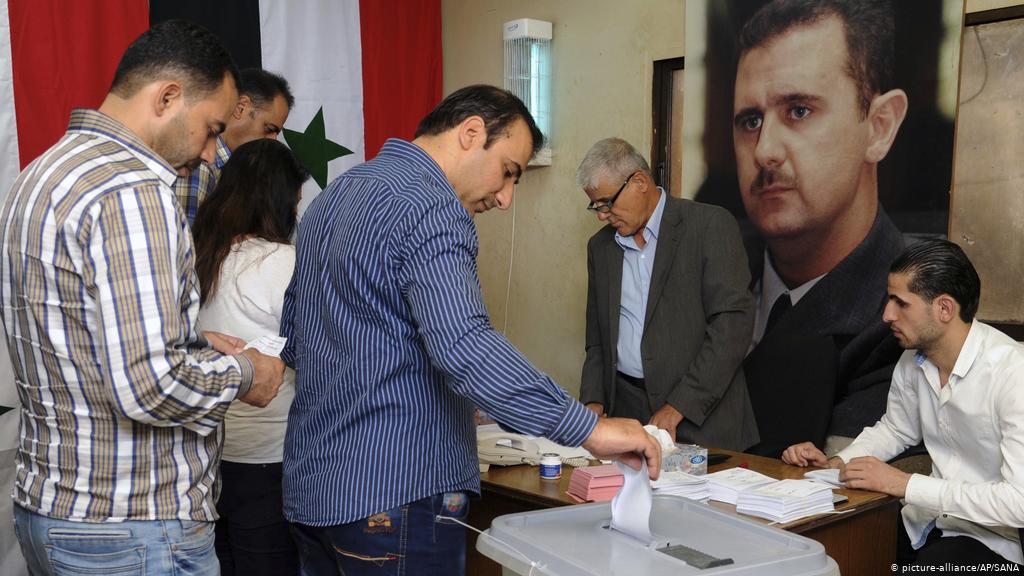 On April 19, the Russian Aerospace Forces killed approximately 200 terrorists during airstrikes on a camouflaged base northeast of Palmyra in the Syrian desert. 24 pickup trucks with large-caliber machine guns, as well as about 500 kilograms (1,100 pounds) of ammunition and components for creating improvised explosive devices, were also destroyed in the attack.  The hidden base was serving as headquarters for terrorists organizing attacks ahead of next month’s presidential election.

Rear Admiral Aleksandr Karpov, deputy head of the Russian Reconciliation Center for Syria [RRCS], gave details of the operation to the media.  According to intelligence sources, terrorists are plotting a terror attack on government institutions in big cities ahead of May 26 presidential polls in Syria.

In the last election, June 2014, there were some terror attacks on polls carried out by the defunct US-backed Free Syrian Army.

Karpov added, “Terrorists are being trained at training camps located on territories that are not controlled by the Syrian authorities, including in the US-controlled al-Tanf zone.”

Russia intervened in Syria at the invitation of the government in Damascus in September 2015.

Syria’s parliament has announced plans to hold a presidential election on May 26.

Hammouda Sabbagh, Speaker of the parliament, said “I call on Syrian citizens inside and outside the country to practice their right in electing the president of the republic.”

Candidates must have lived in Syria for the past decade, which restricts the opposition supported by foreign countries.

Syrians abroad will be able to vote at embassies on May 20. Syrian embassies in over 30 countries participated in 2014, but western nations such as the US, UK, and Germany have closed the embassies and have thus prevented Syrians living there to participate in a democracy.

Presidential candidates to date are Abdullah Salloum Abdullah, Mohammad Firas Yasin Rajjouh, and the first female candidate, Faten Ali Nahar. President Assad announced his candidacy for his second term today, and many believe he has the support to win again, as a member of the oldest and most well-known Al Ba’ath political party.

The Assad administration is secure with the main cities under government control. However, the economy is in dire straits, as food prices soar and the Syrian currency is devalued, which is due to US-EU sanctions.

Geir Pedersen of the UN said he called on all sides to build trust and reach a negotiated solution.

On March 22, tribal sheiks of the Deir Ez Zor region attended a forum in support of President Assad, and released a statement that they “stand by the Syrian army under Assad’s command.”

The tribes have suffered at the hands of the Kurdish SDF, ISIS, and do not want the occupation of both the US and Turkey to continue.

Sheikh Nawaf al-Bashire of the Bakara tribe, who said, “We uphold the unity of the Syrian territories and we stand by the Syrian Arab Army in its fight against terrorism. Our choice in the upcoming elections will be the President Bashar al-Assad, who represents our guarantee for Syria’s national security.”

Fadel Najjar, the governor of Deir Ez-Zor, agreed, while Sheikh Abboud al-Fares of the Akidat tribe said, “The [tribal] forum was held for a purpose, which is to show support for the president in the [upcoming] elections. The tribes of Deir Ez-Zor, from Abu Kamal to the border of Raqqa, send a message to the world that they stand by the president to lead the nation.”

The tribes are Arabs and have been targeted by the Kurds who drove them out of their lands and homes in an ethnic cleansing supported by the US.

The American occupation of Syria

US President Joe Biden is under political pressure to end America’s so-called forever wars, which both he and President Donald Trump promised on the campaign trail.

Lt. Gen. Paul Calvert, who commands the US-led counter-ISIS mission in Iraq and Syria, was asked if he had received new guidance from Washington after Biden’s inauguration on Jan. 20, he said: “The policies in Syria are still the same.”

Col. Scott Desormeaux leads Louisiana’s 256th Infantry Brigade Combat Team in northeast Syria, which is carrying out a mission inherited from Obama and Trump that seems to have no end and has left roughly 900 troops lost in the desert of a stalemate.

In 2015, the Obama administration began offering arms, training, and payroll to the Kurdish-led militia known as the Syrian Democratic Forces (SDF).  In 2016 US special forces were partnered with the SDF in the fight against ISIS, who were eventually defeated in 2019 by the US, SDF, the Syrian Arab Army (SAA), and their partners the Russian military who were on the ground fighting terrorism long before the US invaded.

The US military illegally occupies the area around Al-Tanf, on the border with Jordan in the south. On Monday, the Russian defense ministry said that terrorists were being trained in several camps in areas not controlled by the SAA, “including in the area of Al-Tanf, which is controlled by the U.S. military.”

The US illegally established a garrison at Al-Tanf in 2016.  Both Moscow and Damascus have said the US base serves as a safe haven for terrorists, and the US partnered militia there has been involved in the illegal drug trade in Captagon.

Trump ordered the US and allied troops to be withdrawn from Syria in 2019 but left behind a contingent to prevent the Syrian oil from being used by the Syrian people for their domestic needs, such as electricity, heating fuel, and gasoline

The US-backed SDF militias occupy the northeast of the country where they have committed atrocities and human rights violations. Residents of SDF-controlled areas have long suffered from kidnappings, recruiting child soldiers, torture, ethnic cleansing, and forced displacement in Syria.

The SDF is responsible for holding ISIS prisoners and their families in camps. Occasionally, the SDF will recruit and release ISIS prisoners.

60 ISIS terrorists were deployed in the al-Omar oil field, in the eastern Deir Ez Zor province.   Local sources said that the terrorists were sent there by helicopters belonging to the US Combined Joint Task Force – Operation Inherent Resolve.

The al-Omar oil field was seized by ISIS in 2014, and is considered one of the largest fields in eastern Syria, where the pre-war production was at 400,000 barrels per day (BPD), but fell to just around 89,000 BPD in 2020. Up to 80,000 BPD came from areas that are currently under the occupation of the SDF. This keeps the Syrian people without electricity and gasoline unless crude oil is imported.

The SDF operates dozens of detention facilities scattered across northeastern Syria, holding about 10,000 ISIS terrorists, among them are about 2,000 foreigners whose home countries have refused to repatriate them, including about 800 Europeans. The SDF signed a deal with a US oil company, Delta Crescent Energy, to exploit the Syria oil deposits, which constitute a significant source of income. The Turkish Foreign Ministry condemned the agreement and declared that the American firm was “financing terrorism,” and stealing natural resources which belong to the Syrian people.

Jonathan Hoffman, a Pentagon spokesperson, said in 2019 that the income from oil fields in northern Syria went to the SDF, in violation of international law.

Sources said that ISIS terrorists received special training and tactics from the SDF before being sent to the oil field.

Turkey maintains the SDF poses a national security threat to Turkey and has destroyed homes and forced locals to flee.

Turkey had been the US designated point of entry for Al Qaeda terrorists coming from the four corners of the world.  All payroll and weapons provided to the ‘moderate rebels’ were funneled through Turkey, and the CIA office oversaw the organization of the fight against the Syrian people for ‘regime change’.  In 2017, Trump shut the CIA operation down, as there were no ‘moderate rebels’, only terrorists following the political ideology of Radical Islam.

Turkey invaded Syria in 2019 because they consider the US partner, SDF, to be terrorists.  The result is Idlib is secured in the hands of Hayat Tahrir al-Sham [HTS], formerly named Jibhat al-Nusra, the Al Qaeda affiliate in Syria, and Turkey keeps the Russian and Syrian military from regaining the province which is an agricultural area in the northwest known for growing olives. There is a cease-fire in Idlib but does not protect Al Qaeda or ISIS which are both US-EU and UN-designated terrorist groups.  However, the western media portrays the terrorists as ‘moderate rebels’ when in fact the Free Syrian Army no longer exists or holds any territory in Syria.