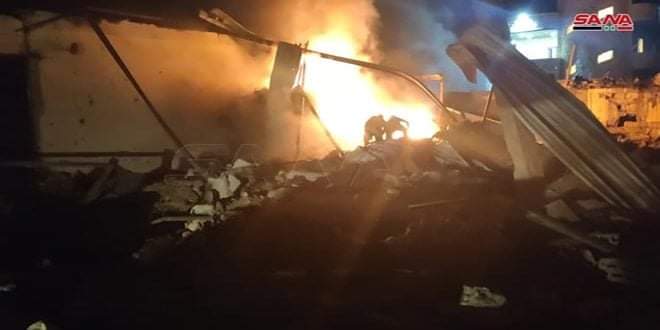 LATAKIA:  A camp created for Palestinian refugees in Latakia, Syria was attacked by Israeli missiles fired today at 2:18 am.  Residents across the area were jolted from sleep and thrown into terror at the sound of the aerial missile attacks across the region.

The Palestinian Refugee Camp was not a military base or Syrian government asset, but a densely inhabited residential area, not far from the center of the city.  The exact area struck was the popular Friday Market where residents buy and sell a variety of new and used items on Fridays.

Those killed and wounded in the attack were all civilians, and among them was a woman and her son. One person died, and six were injured and treated at local hospitals. A privately owned plastics factory was destroyed at Ras Al Shamra, an area known for beach cottages and the site of the first written alphabet on earth.

The aerial attack also included the small city of Jeblah, just south of Latakia, and near the Russian airbase of Hmeimin.

Also attacked was Hefeh, in the foothills east of Latakia, which is a tree fruit-producing area, and Mesyaf southeast of Latakia in the Hama province.

Syrian air defenses confronted the Israeli aggression on the coastal region and downed several missiles in the early morning attacks.

Israel has a very long, and consistent history of air attacks in many places across Syria, and especially in areas near the capital Damascus.  The attacks are unprovoked and go unanswered; however, they have rarely hit Latakia which is close to Russia’s main airbase.

Last week, Israel sent senior delegates to Washington to discuss their view of Iran with US counterparts.

The talks in Vienna between Iran and US envoys have Israel on edge. US President Joe Biden wants a new nuclear deal with Iran, to replace the 2015 deal signed by Obama, but broken by Trump.  Israel is against any deal with Iran.  In the past, Israel has claimed to have targeted Iranian assets in Syria, but the attack today was on civilians and densely packed residential neighborhoods and businesses.

The refugee camp was created in 1948 to house those forced from Israel when the now termed Apartheid state declared independence. The United Nations Relief and Works Agency for Palestine Refugees in the Near East (UNRWA) is a relief and human development agency and has supported the camp with programs and health services.

The camp has evolved over the decades into a crowded residential neighborhood that is under-developed with residents who are a mix of extremely poor Syrians as well as Palestinians because it has affordable housing.

The Israeli attack on the Palestinian refugees in Syria coincides with a buildup of violent encounters in occupied Israel between Palestinians living under occupation in Gaza, Jerusalem, and the West Bank. Israeli military forces prevented Orthodox Christians in Bethlehem from attending Easter celebrations on May 2, and also attacked them with several injuries resulting.

From the beginning of Ramadan in April until the present the Israeli forces have prevented the evening social tradition of Palestinians gathering at the Damascus Gate in Jerusalem.  Violent clashes have erupted repeatedly as Israeli forces have used brutal tactics against the Palestinians.  In the West Bank, Palestinians clashed with Israeli forces at security checkpoints in solidarity with the Jerusalem victims.  In Gaza, the leadership of the Palestinians living under siege has asked for an uprising of resistance to the occupation.  Even though some Arab countries have agreements with Israel, they have all decried brutality against Palestinians, and are unified in their demands for a lasting peace settlement between Israel and Palestine under all existing UN resolutions.

In the later summer of 2011, at the beginning of the US-NATO attack on Syria, while using mercenary terrorists, the Palestinian refugee camp at Latakia was infiltrated by a terrorist group headed by a Chechen who termed himself a “Prince”.  He and his followers entered Syria from Turkey, which was designated by US President Obama as the transit point for all international terrorists following the political ideology of Radical Islam to enter Syria to fight for the US-NATO “regime change” project, called Operation Sycamore.

The Chechen so-called Prince had limited Arabic language skills but used brute force to subjugate the poor residents of the Palestinian camp in Latakia.  He and his militia set up roadblocks and controlled access and movements of the residents.  The residents had no guns or arms and could not fight back, but had to acquiesce to all demands.

In one display of brutality, the Chechen beat an old man in public, to send a message to all.  The residents were forced to supply him and his militia with food, money, and females.  This brutal siege continued most of the hot summer in Latakia 2011 until the Syrian Arab Army(SAR) finally defeated the Chechen and his militia. The Chechen had said his goal was to establish an Islamic State in the Palestinian camp, and he would be the ruling Prince.

The western media never reported on the Chechen or his militia.  The BBC reports on the siege were propaganda.  The BBC claimed the Syrian government forces, the SAR, were attacking the poor residents.  When in reality, the SAR was fighting the terrorists, and in the course of the fierce battles to displace the terrorists and free the civilians under occupation, innocent men, women, and children were killed by both sides.  The BBC is the state media of the United Kingdom, which was allied with the US on the “regime change” project in Syria, which has failed.

NGO Human Rights Watch (HRW) issued a 213-page report, on April 27, titled “A Threshold Crossed”, condemning Israel for “committing the crimes against humanity of apartheid and persecution against Palestinians” in the occupied Palestinian territories (OPT) and in Israel itself.

“While much of the world treats Israel’s half-century occupation as a temporary situation that a decades-long ‘peace process’ will soon cure, the oppression of Palestinians there has reached a threshold and a permanence that meets the definitions of the crimes of apartheid and persecution,” said Kenneth Roth, executive director of HRW.

Apartheid is defined by the 1973 Apartheid Convention and the 1998 Rome Statute of the International Criminal Court defined as systematic and institutionally entrenched domination and repression by one racial group over another through “inhumane acts”. Among such acts are: “arbitrary arrest and illegal imprisonment of the members of a racial group”; measures “designed to divide the population along racial lines by the creation of separate reserves and ghettos for the members of a racial group or groups”; “forcible transfer”; “expropriation of landed property”; and denial of “the right to leave and to return to their country, [and] the right to a nationality”. All these have been part and parcel of Israel’s settler-colonial project in Palestine since the very beginning. And UN diplomats, legal scholars, and activists have applied the concept of apartheid to Israel since at least the 1970s.

Archbishop Emeritus Desmond Tutu, widely regarded as “South Africa’s moral conscience”, said after visiting the Holy Land in 2002, what he saw in Israel’s treatment of Palestinians reminded him “so much of what happened to us Black people in South Africa”, which he has since reiterated.

Israel’s attack on the Palestinian Refugee Camp in Latakia is just another example of the arrogant disdain the occupation forces and their government have for the poor and oppressed.