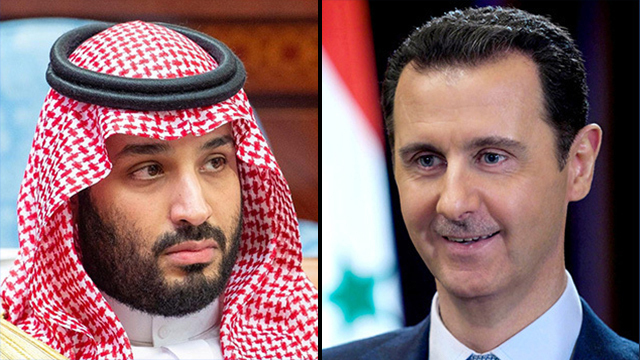 The Kingdom of Saudi Arabia is embarking on a new beginning that could change the Middle East.   To enhance security and stability, a Saudi delegation headed by the head of the intelligence service, Lieutenant General Khaled Al-Humaidan, visited Damascus on Monday and met Syrian President Bashar Al-Assad and the Vice President for Security Affairs, Major General Ali Mamlouk. The talks were aimed at restoring diplomatic relations after a ten-year pause, reported the private London-based Arabic daily, Rai Al-Youm.

Saudi Arabia will reopen its embassy in Damascus following continuing talks planned in Damascus after the end of Ramadan, and the Eid al-Fitr holiday. The Syrian ambassador to Lebanon issued a positive statement on the topic.

Lebanon remains at the core of Saudi interests in the eastern Mediterranean region, and the assistance of Damascus in stabilizing Lebanon is crucial. A US State Department assessment in 2020 found evidence that Damascus was regaining its pre-eminent place in Lebanese politics. Following the collapse of Lebanese banks, Saudi Crown Prince Mohammed bin Salman has worked towards making Riyadh a player in Lebanon again, and the Saudis need President Assad on their side to help shape the region.

Saudi Arabia is recalibrating its foreign policy and repairing relations with its neighbors as it works to stop the influence of global powers in the region. The visit to Damascus comes after the UAE and Bahrain have publically shown support for the Assad administration in recent years.

Giorgio Cafiero, CEO, and founder of Gulf State Analytics, a geopolitical risk consultancy based in Washington, said “The Saudis have to be pragmatic in how they deal with Syria. It’s very clear that Damascus isn’t on the verge of falling and I think the Saudis are coming to terms with the inevitable in moving toward some sort of rapprochement with Syria,” he said. “It’s important to realize that as Assad has proven triumphant on the ground and as the Saudis have deepened their relationship with Russia,” said Cafiero. “We need to keep in mind that Syria is very much in need of reconstruction and redevelopment and the Syrian government is going to want help from the wealthy Gulf countries, so this is certainly a card that the Saudis can play at some point – to support reconstruction with deep pockets,” said Cafiero.

Syria would also be able to lobby Washington indirectly through Abu Dhabi and Riyadh to lift sanctions, and thereby access the funds being offered by the Gulf states to rebuild Syria. The UAE has publicly called for the removal of US Caesar Act sanctions, and is delivering regular medical aid and helping to facilitate Syria’s regional rehabilitation. The Emirati foreign minister had declared that “the return of Syria to its environment is inevitable and is in the interest of Syria and the region as a whole, and the biggest challenge facing coordination and joint work with Syria is the Caesar Act.”

Algeria is insisting that Syria be readmitted to the Arab League, and the UAE has restored ties with Syria as it seeks to contain Turkish expansion. The UAE, a Saudi ally, reopened its embassy in Damascus in December 2019 in an attempt to re-engage with Syria. Oman and the UAE, have recently rekindled ties with the Syrian government.  Iraq, another Syrian ally, has also pushed for Damascus to rejoin the Arab League.

Iraq is turning to Syria as a transit route for Egyptian gas imports. Iraqi oil minister Ihsan Abdul Jabbar Ismail said on April 29 that discussions have opened with his Syrian counterpart Bassam Toumeh. “We have a common vision about the possibility of steering and moving Egyptian gas through Syria land,” a spokesman for the Iraqi oil ministry said.

The Arab Gas Pipeline runs from Egypt to Jordan, Syria, and Lebanon, with the Syrian section having been completed in 2008. Gas exports from Egypt to Iraq would flow through an extension to the pipeline.

The Akkas gas field is in western Al-Anbar province in Iraq, but the field development was put on hold while the area was occupied by ISIS.  However, both the Syrian and Iraqi governments control the areas on both sides of the border, and Iraq has planned to supply surplus gas to Syria.  US-based energy firm Schlumberger is to lead a consortium to develop Akkas, a project that also involves Saudi companies.

Russian Foreign Minister Sergei Lavrov visited Saudi Arabia in March, sending signals to Washington that the Saudis are seeming to inch closer to the Russian position on Syria. Saudi Foreign Minister Prince Faisal bin Farhan said in a joint press conference with Lavrov, “We are keen to coordinate with all parties, including Russia, to find a solution to the Syrian crisis.”

Sami Hamdi, the editor-in-chief at The International Interest, says that the Saudi displeasure with the Biden administration has something to do with the shift as well. “Bin Salman may also have eyes on deepening ties with Russia as Riyadh becomes increasingly disillusioned with Washington. Engaging with Syria is likely to increase Saudi-Russia ties and cooperation,” Hamdi said.

Saudi Arabia, the UAE, and Russia have coordinated well on the issue of oil within the OPEC framework and the pursuit of market equilibrium.

Iraq has played host recently to Saudi Arabia and Iran in last month’s direct talks that officials hope will defuse the tension between the two regional powers. Talks behind closed doors between the two were held in Baghdad as senior representatives from both worked to find common ground. The Lebanese newspaper Al Akhbar reported that the discussions which started in Baghdad will continue.

Iran will also urge Saudi Arabia to recognize President Assad as the legitimate leader of Syria, paving the way for Syria’s re-entry into the Arab League. This may be timed to coincide with the outcome of the Syrian presidential election on May 26.

The Saudi, Jordan, Syria highway for the movement of goods and people is now open.  Jordan held the key and has opened the border crossing with Saudi Arabia at Al-Omari post, while also opening the Jaber crossing into Syria, which is called Nassib on the Syrian side.

Saudi Arabia will push for a solution to the Syrian crisis and that will place the interests of the region above all else, even if they conflict with Washington.

The US-allied Gulf Arab states, especially Saudi Arabia and Qatar, were the main regional backers of armed groups opposed to the Syrian government, providing finance and weapons as part of a program of support for the armed opposition coordinated by Washington.

The Syrian battleground has provided fertile ground to feed extremism among the region’s youth, as radical groups can use social media. By pushing for a solution in Syria and the return of Damascus to the Arab fold, would end the use of Syria as a battlefield for conflicting regional and international agendas.

The US State Department responded to the Emirati foreign minister’s statements on Tuesday regarding the effects of the US “Caesar Act” on the lives of Syrians, by claiming the sanctions have nothing to do with the humanitarian crisis in Syria, even though medical supplies and equipment are forbidden by US-EU sanctions.