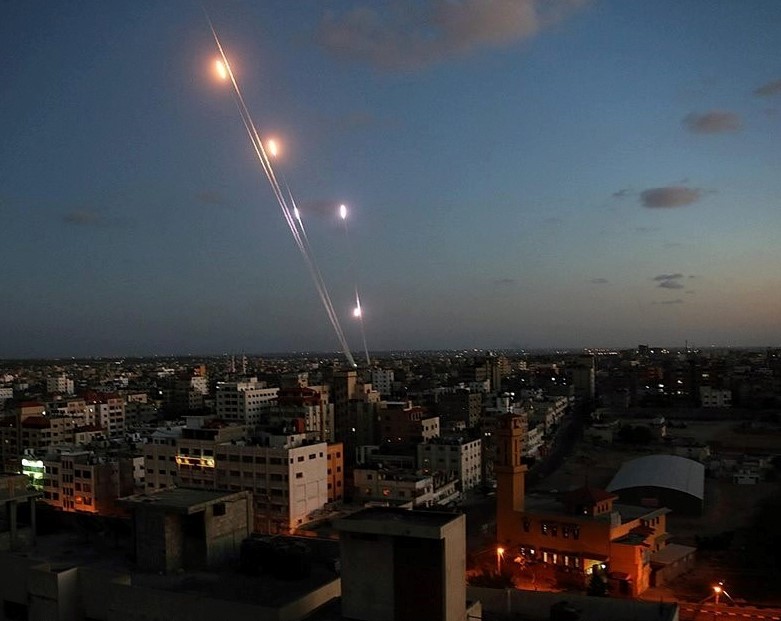 For the first time since the 2014 war, Palestinians in Gaza fired an uninterrupted barrage of more than 500 rockets into Israel, as the Israel Defense Forces pounded Gaza with more than 140 airstrikes through the early hours of Tuesday.

The Iron Dome, Israel’s antimissile defense network, destroyed many of the rockets that reached Israeli airspace, but not the rocket that hit the oil storage reservoir at Ashkelon which burned out of control for hours. Arriving passengers at Tel Aviv’s Ben Gurion international airport were seen running with their luggage to take cover from the rocket attack, and busses and cars parked in Tel Aviv were destroyed.

On Tuesday morning the Shati refugee camp near Gaza City was a scene of destruction following repeated Israeli airstrikes on a residential high-rise. The roof of the building collapsed onto the apartment below, killing two people, while elsewhere nine children were among the dead in Gaza.

Palestinian Health Ministry spokesman Ashraf al-Kidra said that Israeli strikes near a coronavirus quarantine center in southern Gaza earlier Tuesday had a “direct impact” on the ministry’s ability to provide Coronavirus care to patients at the facility. Israeli Prime Minister Benjamin Netanyahu convened an emergency security meeting Tuesday with Defense Minister Benny Gantz.  Israeli citizens were questioning their government’s actions which put Israeli neighborhoods in danger.  Israeli citizens who are working for a peaceful solution for their Palestinian neighbors are wondering how many will die while their government officials act with impunity.

Citizen protests in Arab countries throughout the Middle East called to defend al-Aqsa Mosque and East Jerusalem from Israeli aggression. Similar protests spread throughout the globe, and on Tuesday pro-Palestinian protesters held a demonstration outside the Israeli consulate in New York. The demonstration was called Emergency Rally for Palestine”, and thousands gathered while shouting, “Stop the killing, stop the hate, Israel is an apartheid state.”

On April 27, the international group “Human Rights Watch” issued a groundbreaking report, “A Threshold Crossed: Israeli Authorities and the Crimes of Apartheid and Persecution.”  The following an excerpt:

“About 6.8 million Jewish Israelis and 6.8 million Palestinians live today between the Mediterranean Sea and Jordan River, an area encompassing Israel and the Occupied Palestinian Territory (OPT), the latter made up of the West Bank, including East Jerusalem, and the Gaza Strip. Throughout most of this area, Israel is the sole governing power; in the remainder, it exercises primary authority alongside limited Palestinian self-rule. Across these areas and in most aspects of life, Israeli authorities methodically privilege Jewish Israelis and discriminate against Palestinians. Laws, policies, and statements by leading Israeli officials make it plain that the objective of maintaining Jewish Israeli control over demographics, political power, and land has long guided government policy. In pursuit of this goal, authorities have dispossessed, confined, forcibly separated, and subjugated Palestinians by virtue of their identity to varying degrees of intensity. Israel has maintained military rule over some portion of the Palestinian population for all but six months of its 73-year history. A number of Israeli officials have stated clearly their intent to maintain this control in perpetuity and backed it up through their actions, including continued settlement expansion over the course of the decades-long “peace process.” International criminal law has developed two crimes against humanity for situations of systematic discrimination and repression: apartheid and persecution.”

Another international group, “Amnesty International” issued their report “Israel and Occupied Territories 2020.”  The following is an excerpt:

“Israel continued to impose institutionalized discrimination against Palestinians living under its rule in Israel and the Occupied Palestinian Territories (OPT). It displaced hundreds of Palestinians in Israel and the occupied West Bank, including East Jerusalem, as a result of home demolitions and imposition of other coercive measures. Israeli forces continued to use excessive force during law enforcement activities in Israel and the OPT. The authorities used a range of measures to target human rights defenders, journalists and others who criticized Israel’s continuing occupation of the West Bank, Gaza Strip and Syrian Golan Heights.”

US President Biden’s administration appears to disengage itself from the current escalation, while some liberals urge Biden to challenge Israeli settlement activity, which makes a peaceful resolution with the Palestinians impossible. Many Democrats, including Biden officials speaking privately, say that Trump is to blame for the current violence because he emboldened Netanyahu and allowed him to act with impunity.

Sheikh Jarrah, a neighborhood in occupied East Jerusalem, is at the heart of the current conflict.  An Israeli Supreme Court hearing was set for May 10, which concerned a long-running legal case to evict four Palestinian families from their homes near the Damascus Gate. The court decided on Sunday to delay the ruling for 30 days, bowing temporarily to pressure from Washington.  Lawyers for the families asked Israel’s Attorney General Avichai Mandleblit to explain why the land’s ownership had been transferred to a settler group in 1972, allowing the settlers to illegally register the land in their names. Forty-three Palestinians were forced out of Sheikh Jarrah in 2002 and others again in 2008 and 2017, and their homes were taken over by illegal Israeli settlers.

Israel, which annexed East Jerusalem in 1967, sees all of the city as its capital, while Palestinians want the eastern section as a capital of a future state. Israel’s annexation of East Jerusalem is largely unrecognized internationally.

There is an open-air stone amphitheater near the Damascus Gate which is traditionally the site of evening gatherings of young Palestinians during the month of Ramadan, which began April 13.  The Israeli police prevented Palestinians from their traditional social gathering following by the evening meal.  Clashes erupted when police used brutal force and overbearing tactics against the peaceful social gathering.

The neighborhood is also home to Temple Mount, the holiest site in Judaism, as well as the Dome of the Rock and Al-Aqsa Mosque, the third holiest place in Islam. Last week, hundreds of Palestinians were wounded by Israeli forces which stormed the Al-Aqsa Mosque compound on the holiest night of the Ramadan month.

On Monday, Palestinians fired rockets into Israel in response to violent clashes between Israeli police and Palestinians in Jerusalem, where Israeli security forces violently stormed the Al Aqsa Mosque compound, with snipers gunning down Palestinians with rubber-coated steel rounds and troops chasing and beating others. Some worshippers were attacked during morning prayers and hundreds of Palestinians were wounded.

Thousands of nationalist Israelis poured into Jerusalem on Monday to mark “Jerusalem Day” commemorating the 1967 takeover of Arab East Jerusalem. Extremist Israelis harassed Palestinians during the marches while chanting “Death to Arabs”, and the worst Jewish curse to be uttered: “May their names be erased.” More than 300 Palestinians were injured.

Clashes erupted in the West Bank at Israeli checkpoints as Palestinians held protests in solidarity with Jerusalem and Gaza. There were reports of Jews stoning a car driven by a Palestinian. The unrest resulted in hundreds of arrests and at least one Palestinian fatality.

Hamas in Gaza issued a threat to Israel on Tuesday. The armed resistance group threatened to strike Tel Aviv if Israel would attack high-rise residential buildings. Israel demolished two tower blocks and hundreds of rockets began to rain down on Tel Aviv as air raid sirens squealed and residents began running to shelters. There were civilian deaths in Ashkelon when an apartment building was hit by a rocket.

Mussa Hasson, a 25-year-old resident of the mixed Jewish-Arab city of Lod, was shot to death after an Israeli opened fire on a group of Arab protesters carrying Palestinian flags, in which four Arabs were wounded.  After the man’s funeral, cars were set alight in Lod and the situation escalated to a full-scale riot, with protesters throwing rocks at police, who responded with stun grenades. Israeli Prime Minister Benjamin Netanyahu declared a state of emergency in Lod on Tuesday night, which was the first time the government had used emergency powers over an Arab community since 1966.